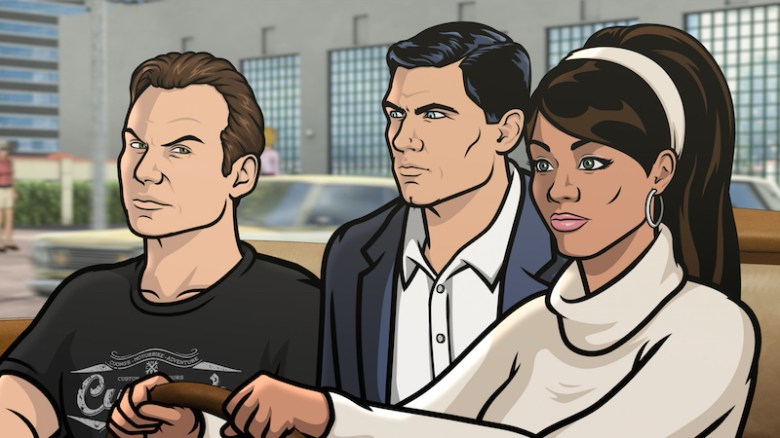 So…robot clones? If you thought you saw the last of the replica masks Krieger made based on each P.I. in The Figgis Agency, think again. First introduced in “Motherless Child” (Episode 4 of this season) as a means to hide Barry’s exoskeleton when he first meets his birth mother, Krieger’s backroom project — which was exposed as a small army of robot clones this week — may just hold the key to solving Archer’s upcoming “death.” Instead of the real Sterling floating face-first in Veronica Deane’s pool, it could be his robot clone (and, yes, I’m going to use the term “robot clone” as much as I can).

Then again, giving the fallout this week, it could be the real Archer in the pool, and we’ll live out the rest of the series with robot Archer as our new lead. That theory is entirely based on the idea that Lana kills her semi-ex-boyfriend, which seems all the more plausible after the couple went on a break this week. Lana is still raging mad about Archer’s kiss with and crush on Veronica Deane, and he’s not doing himself any favors by rubbing it in her face.

In non-serialized news, the big event of this week was the return of Slater, who was back to hire The Figgis Agency to do an off-book job for the CIA. Turns out Archer and Lana were right to be suspicious, as they were never paid for their part in tracking down a former soldier-turned-lab-rat who was plotting to assassinate a key dignitary. Technically, they got the job done (after Archer was traumatized by his first water-boarding), but that mattered to Slater as much as the actual plot of this episode mattered to the series: nada. That’s no slight, though. Between the break and the big reveal, we also were treated to Cyril, Cheryl, Pam and Mallory put through hilarious hypnosis and some excellent phrasing all around.

The best drinking reference wasn’t Mallory refusing to share her champagne with Lana. Nor was it Slater only agreeing to drink with her after she’d used the bottle to club her son (nearly) unconscious. The best reference came as a hungover Archer shouted at Cyril, “If you were me I’d drink a bunch of antifreeze and then jump off a bridge holding a toaster.” The insult works wonders by itself, but pairing it with Milton, the copy machine/toaster, sliding up to Archer after he said it — and receiving condolences! — really put the quote over the top. It was a nice button for a show packed with them, and an impressive callback to one of the office’s stealthiest characters.

Frankly, the most artfully staged action scene came when Archer tried charging Slater, only to end up with a bottle of Dom to the noggin’. The well-executed, direct-to-camera, slow zoom worked beautifully, but we would be remiss in failing to mention Krieger’s damning hypnosis video. I mean, that’s a thing of beauty. He should submit it to Sundance with a short film cut and a feature-length version. I’m sure he’s got the footage, and — if he was thinking ahead — he should have enough material to form two unique stories. Park Slope people would eat it up.

Archer: “Plus, I bet this only affects women. Well, you know, people with vaginas. However you chose to self-identify.”
Slater: “God I’m going to enjoy this.”
Archer: “Well, I know you like putting stuff in guys’ mouths.”
Slater: “You finished?”
Archer: “Ha! I bet you ask guys that a lot.”
Slater: *clears throat*
Archer: “And then clear your throat!”

“Hey, Eckhart! Come move your goddamn car out of my spot, you bug-eyed–“

While Archer’s antagonizing introduction may not seem particularly regional, I can assure you that nothing infuriates L.A. natives more than parking. If anyone so much as implies your car may be in danger of being towed or ticketed — which, even for an expired meter, means a $75 fine — Los Angelenos will most likely respond with a level of madness that rivals Eckhart’s shotgun blast.

“Archer” is proving itself to be quite the skillful serialized storyteller. Following up an episode that had pretty much nothing to do with the ongoing story of Season 7, “Liquid Lunch” seemed to be equally disconnected — at first. Slater’s return didn’t speak directly to the mystery surrounding Veronica Deane, but her presence was certainly felt throughout. More importantly, the fight between Lana and Archer actually escalated to a dramatic shift in their relationship, and the final reveal of Krieger’s clone army opened up a plethora of possibilities for the rest of the season.

And this, to me, is what elevates Episode 8 above its direct predecessor. While both are largely focused on creating extreme scenarios setting up equally over-the-top jokes — waterboarding, mind control —  “Liquid Lunch” gives us a little somethin’ extra to hold us over until next week. Oh, and that waterboarding gag really was outstanding. Archer’s blue, haunted face said so much. What a transition.