"Archer" set the table for an exciting finale next week, but there was more than enough here to make "Part 1" stand on its own. 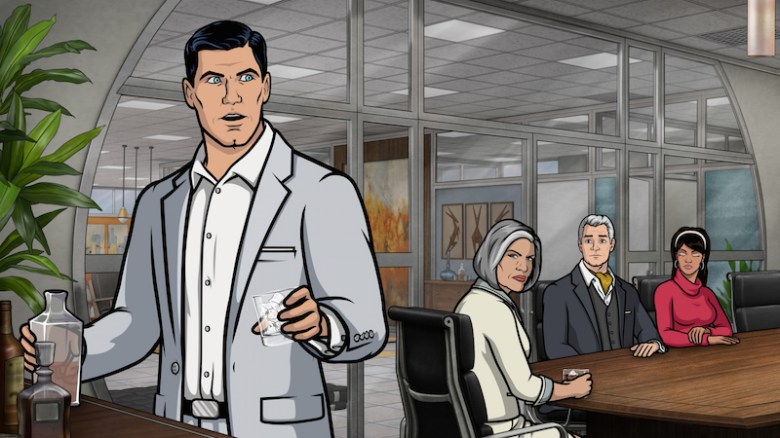 After being hired to protect megaproducer Ellis Crane’s movie, The Archer Agency, er, The Figgis Agency agents all assume fake film roles to blend in on set. Cyril takes a look at the accounting department; Pam and Carol handle craft services; Ray reluctantly takes over as grip; Mallory assumes the elaborate role of executive producer; Krieger “just kind of skulks around”; and Archer assumes the role of Veronica Deane’s private bodyguard.

Some of these positions are more beneficial than others. As Ray spends most of his time talking to mannequin heads, Archer saves Veronica’s life from a runaway lifter, effectively seducing her in the process. That’s too bad for Shapiro (Patton Oswalt), who confesses his love for Veronica shortly thereafter, even going so far as to recruit Pam and Carol to help him stop the presumed coupling. But it’s too late — for Shapiro’s heart, which suffers a major blow by seeing a naked, post-coital Archer; Lana’s sanity, as she attacks Sterling for bedding someone only two days after their “break”; and for Crane himself, who ends up with a bullet in through his head — and watch — fired at exactly 2:41pm. Good thing Veronica was with Archer until almost “the stroke of three…”

I’m calling it now: The Mallory Archer we saw this week isn’t the real Mallory Archer. She’s Robot Mallory. In the case of The People v. Ben Travers’ Poor Judgement, I submit only one piece of evidence: Mallory ate a grape.

…or she’s a freaking robot! Plus, what’s with Mallory telling Krieger to just “skulk around” on set? That’s hardly what she’d want while trying to make The Archer Agency appear professional. Robot Mallory, however, would want Krieger to just wander around and have fun. Because he’s controlling her. Well, it. “But how can a robot eat a grape, Ben?” A good point, dear reader, but let me ask you this: Which is more likely: that a Krieger created a robot capable of eating or that Mallory would eat on her own?

Did Archer need to karate kick Shapiro out of harm’s way? No, not really. But did he look all the cooler because he did? You bet. And did that ultra-cool moment lead to him bedding his ultimate movie star crush? Absolutely. Well, maybe. Considering the episode’s cliffhanger implication — that Veronica’s over-emphasis on the time she left Archer’s sticky side implicated she merely used him as an alibi — she may have ended up seducing him anyway. Archer may have been played… But the chance that he wasn’t is still worth a lawyer’s broken ribs. He’s probably okay with that.

A twofer this week because we look at these:
Mallory: “When was the last time you even saw your penis?”
Carol: “She knows you’re a woman, right?”
Pam: “I thought she did.”
Carol: “Wait, you had sex with her.”
Pam: “Yeah, but she was all tore up drunk. Oh, plus I was wearing a strap—”
Carol: “Ewwwwwww!”
Shapiro: “What?”
Carol: “Don’t ask you’ll gag.”
Pam: “She certainly did.”

Hanging out on a movie set is something everyone should experience at least once in their life and having free range on a studio lot adds so much to the experience. Like a little world all its own — complete with banks, groceries and coffee shops — with history literally around every corner, studio lots are pretty much exactly like what’s depicted here (sans explosions). Once you’re in, you’re in — roam, explore and enjoy. The Figgis Agency agents were obviously a bit preoccupied to get into too much trouble, but the animation team did an exquisite job capturing the authenticity of so many fake places built so closely together. From the lighting to the locations, “Deadly Velvet, Part 1” gave a great taste of what it’s like to be where so many people dream to be.

Archer and Lana’s incessant fighting is always fun, but when it reaches rage-blackout mode — as it did this week following Archer’s sexcapade with Veronica Deane — “fun” doesn’t quite quantify things. For as much as we desperately want these two to work it out and be happy, they’re simply too quick-witted in their passionate scrums to wish for a perfectly healthy relationship. I mean, this is so much better than when they were uncontrollably flirting at the office, right? We’d rather see this than burritos as placeholders for god-knows-what body part(s). Plus, that giggle Archer let out when Lana tackled him leads us to believe someone is having a blast.

Well, here we are. Nine episodes of “Archer” Season 7 are in the rearview mirror, and only one remains before we find out how our hero ended up full of holes. The two-part finale’s title certainly alludes to answers; worrisome answers to the glimpsed fate of Sterling Archer. Frankly, our early (kind of joking) theory that Lana was the one to pull the trigger (a bunch of times) is looking all the more likely, even if it’s still hard to believe she’d kill off her baby’s father.

Yet even after a season’s worth of wondering, “Part 1” made waiting for “Part 2” all the more bearable. A fun assignment that progressed the plot and added yet another mysterious layer to the Veronica Deane case left next week’s kicker with a lot of explaining to do, but we’ve had a blast up to this point. If these are the last days of a living, breathing, non-robotic Archer, it would be hard to say he didn’t live them to the fullest.