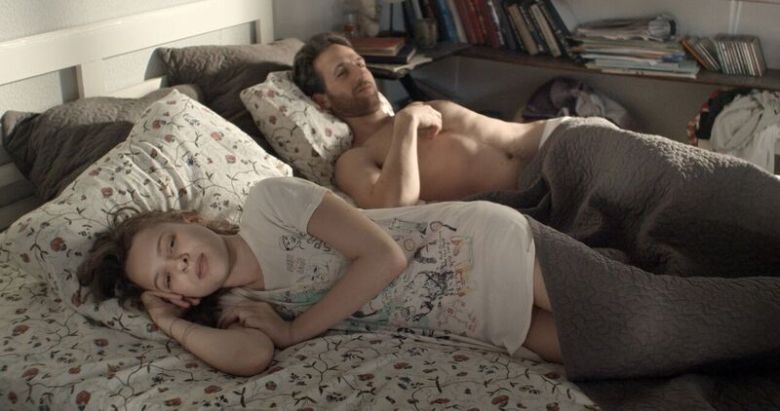 There’s something not quite right in young Adar’s (Shira Haas) home. Edging up against teen life, Adar routinely makes her way in the middle of the night to her mother Alma’s (Keren Mor) bed, which also happens to be occupied by Alma’s overly friendly boyfriend Michael (Ori Pfeffer), often interrupting – though could we call it interrupting if they don’t even bother to stop? – her amorous parental figures from their vigorous and frequent sexual activity. Alma and Michael’s behavior extends far beyond hugs and kisses, and there’s scarcely a moment when they’re not rubbing up against each other in ways that are not appropriate for anyone else to witness, least of all their curious and impressionable child.

It’s clear that boundaries don’t exist inside Adar’s home, but still more upsetting, none of its inhabitants notice that anything is amiss. While their interactions (including Michael hanging out in just his underwear for hours on end, or Alma and Michael loudly making love at all hours for everyone to hear) are clearly normal for them, Adar’s advancing maturity — made all the more real by Haas, stunning in her first role — means that something needs to change, and soon. Although much of Alma’s tactile touching could be passed off as a loving parent connecting with her child – and Alma does ultimately seem to be just that – Michael’s behavior progresses from inappropriate to skin-crawlingly gross throughout the course of the film.

Suffocated by the “Virgin Suicides”-esque hothouse environment of their apartment – Adar is suspended from school, while Michael has just lost his job – Adar eventually ventures outside and unexpectedly meets a new friend. Young street kid Alan (Adar Zohar-Hanetz) so strongly resembles Adar that the two can’t help but notice their similarities when they encounter each other on the street. In one of the film’s few truly joyful moments, the pair dance around the city, mirroring each other and wondering at the strange coincidences that brought them together. Their next task? Purchasing a wardrobe of matching clothes, which makes it easy to mix the two up throughout the rest of the film’s running time. It’s no surprise that someone raised in such a physically charged atmosphere is able to bond with a stranger simply because they so strongly look like each other.

Adar’s parents, unfit to be in charge of a child for a multitude of reasons, scarcely utter a peep when Adar brings Alan home, and the foursome settle into a weirdo approximation of a nuclear family. Having a new friend, one that at first belongs entirely to her, appears to awaken Adar to the awkwardness endemic in her household. As she begins to observe her family with fresh eyes, Adar subtly becomes conscious of what’s really happening around her. “Princess” is increasingly claustrophobic, and the lingering feeling that things would be better if just one moment, just one, could go by without two of its characters feeling up on each other, soon becomes hard to shake.

As a result, “Princess” is one of the most genuinely dread-filled and nauseating films in recent memory — and writer and director Tali Shalom Ezer refuses to flinch at what she’s created (and neither do Haas and Pfeffer, who breathe vicious life into both of their characters). But that doesn’t make it entirely successful at what it’s setting out to do.

Early on, Ezer keeps certain events just outside the frame (like a tickle fight between Adar and Michael that has shocking consequences), but she never obscures what’s actually happening. That unflinching nature extends to a scene of horrific violence in the film’s third act which, though important within the context of the film, is so repulsive that it can’t help but challenge even the most open of audiences. “Princess” is an arresting and taxing film experience, and although Ezer’s execution and vision are clear-eyed and she’s portraying experiences that still (tragically) occur in the real world, it’s difficult to wonder what the film itself is hoping to accomplish.

Its final moments do little to dispel that feeling, as brief bits that seem to hint at necessary changes are drowned out by overly dreamy sequences and vague progressions that do little to actually diffuse the horror of Adar’s life. She deserves better, but “Princess” refuses to give it to her (or us).

“Princess” opens in theaters this Friday, May 27. It is currently available on VOD.