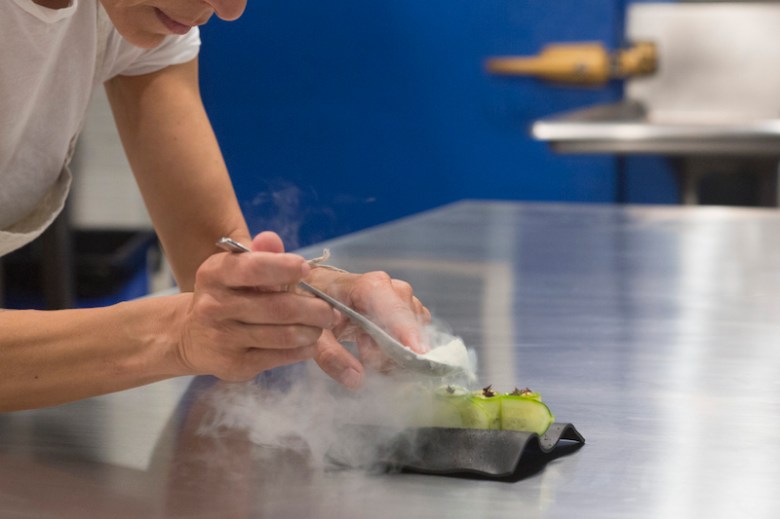 If you had told me the above phrase would be used to describe an edible anything in the first episode of “Chef’s Table” Season 2, boy oh boy would it have been a struggle to get me to watch it at all. Admittedly, I’m part of the shrinking minority who hasn’t jumped on the booming foodie trend, in part because my flavor palette is simply too undignified. But as a television fan, I’ve been sucked into a handful of the ever-growing chef series, restaurant reality shows and general food porn. A few have value of the “turn your brain off” variety, even when I roll my eyes at the grand importance placed on one of life’s most basic necessities.

Yet “Chef’s Table” stood out in its first season. The Netflix docu-series’ ambitions were greater than replicating a successful business model for a platform lacking its own spin on the genre. Creator, director and executive producer David Gelb (“Jiro Dreams of Sushi”) crafted a deeply personal examination of cuisine, painting a picture — sometimes literally — of why everyone should identify with these people even if they don’t identify with the food. 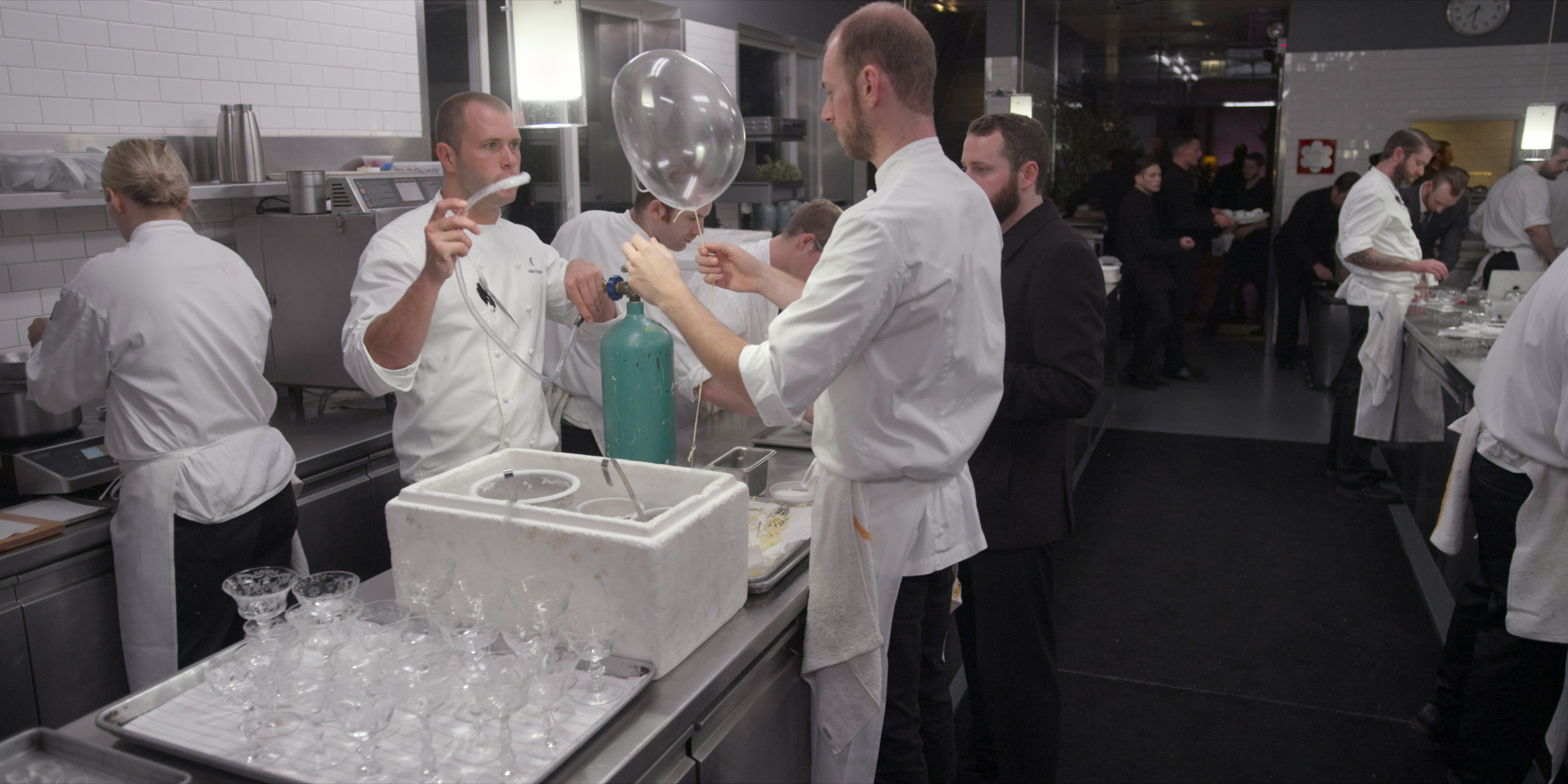 For transparency’s sake, I was first exposed to “Chef’s Table” as a jury member for the IDA Awards, where we selected it as the best episodic entry of 2015. Deliberations were polite, carefully considered and lengthy, but we all kept coming back to the show because it just felt special — to each of us, for different reasons.

At the time, I read Indiewire’s review by the great Emily Buder, and my own feelings became quite clear. While highlighting Gelb’s emphasis on chefs as people over what they cook, Buder wrote, “‘Chef’s Table’ is a one-of-a-kind meditation on creativity. In exploring the identity and artistic process of each chef, the series transcends the genre of the cooking show. […] It’s remarkable, if you think about it, that human beings have transformed a necessary element of life into an extension of personhood.” And the series did exactly that: It made you think about what makes these chefs’ efforts so remarkable; a beautiful sentiment for a beautiful series, and one I latched onto.

And yet…the “pillow” of air. No matter how personal the story gets, no matter how much emphasis is placed on the artists and not the artistry, how can a self-respecting non-foodie get past such a pompous, admittedly pretentious title?

The answer, as simple as it sounds, is in the recipe. No, not the actual recipe of that truly incredible edible pillow, but of the episode itself. Director Brian McGinn sets up the first hour of Season 2, “Grant Achatz” (titled after the chef), in a way that hides the food’s reveal until you’re already hooked. Tracking a chef who actually uses the phrase, “Rules? There are no rules,” with enough authenticity to sell it, the first episode draws you in with work that’s described like a magic trick. And the episode itself functions as one, too. 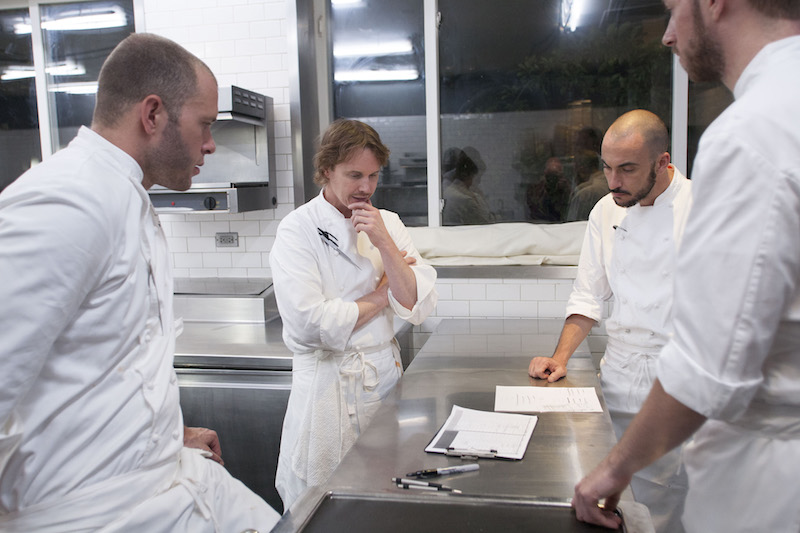 Because of the initial illusion that lured you in — literally into Achatz’s restaurant, figuratively for those watching at home — you’re there for the entirety; first for the opening hour, then for the whole season. Achatz is so out of the box it’s as though he’s not creating food. He’s just creating…things. Call it art if you’re so inclined, but the best description is probably the most fundamental descriptor: “things.” Not to diminish the accomplishment, but I was so deeply flabbergasted when staring at his creations, “things” was the best I could do without more information.

Then. Bam. As if out of nowhere, “Pillow of nutmeg air.” The title — artfully displayed next to a gorgeous shot of the noble experiment — was so influential I scribbled it down in my notes out of sheer instinct. It was like a trigger went off in my brain, warning me to run away as fast as I could.

Instead, I stayed. I watched as much of “Chef’s Table” as was provided (all six episodes) and felt great about it afterwards — unlike a few overly pompous dining experiences of the past. And the reason was that McGinn, Gelb and the whole “Chef’s Table” team provided too much irrefutable evidence of the series’ intent, meaning and impact to let my snark seep out. Without spoiling anything, that opening episode is an unforgettable story — more so, even, than Mossimo Bottura’s, which kicked off Season 1. That, too, worked in a similar vein, even if it didn’t have the precise metaphor — magic — provided in the narrative.

No matter. “Chef’s Table” has proven itself to be a study of passion told with equal verve and unquantifiable beauty. Go ahead and indulge yourself — well beyond the Pillow of Air.