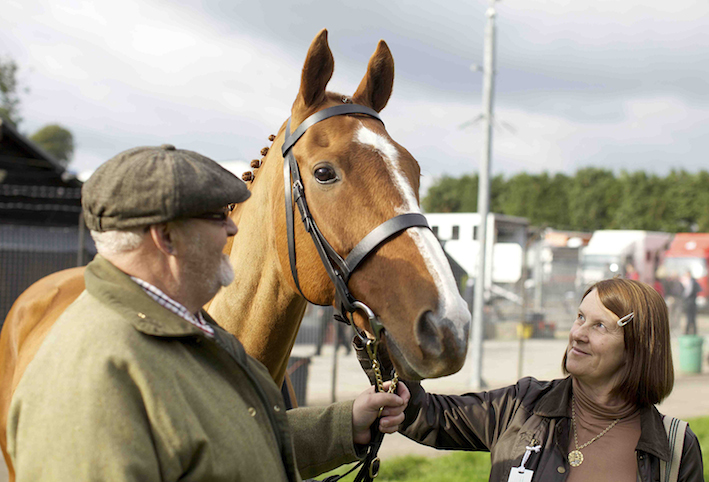 “We actually broke the mold. We actually went there and did it,” a member of the Alliance Partnership muses early on on Louise Osmond’s big-hearted and touching new documentary “Dark Horse.” The “it” in question is a somewhat nebulous one, as the film doesn’t just function as a stand-up-and-cheer sports story (though it is) that culminates in some big win. Instead, this is a gentle window into a little-seen section of working class life. “Dark Horse” may follow the breaking of molds in the race horsing circuit, but it really wins when it buckles down on the intensely human story at its center. That’s the big “it.” That’s the real win.

On its surface, “Dark Horse” is the story of Dream Alliance, a Welsh thoroughbred racehorse who unexpectedly rose to the top ranks of the sport during a slow burn career marked by a handful of injuries and even a brush with death that will wring buckets of tears out of even the most cold-hearted audience member. But while Dream’s career is the stuff of uplifting blockbusters (the horse wins so many “big races!” that it’s easy to lose track of them all), Osmond’s film is much more concerned with the people behind the horse, rather than the splashy sport he dominated during the early aughts. Dream’s entire existence was borne from the unique idea that racing didn’t have to just belong to the wealthy and powerful, and could in fact be infiltrated by a handful of scrappy outsiders with a big, well, Dream.

Dream may be the star of “Dark Horse,” but the film’s hero is Jan Vokes, a small town barmaid who spent her youth dabbling in animal breeding (dogs, birds) and who happened to always love horses best of all. Not deterred by horse racing’s status as an “exclusive, expensive hobby,” Vokes gets it into her head that she should breed a racer and get her whole town to help. Osmond’s film follows Vokes’ idea from its earliest inception, carrying it through to the acquisition of the future horse’s mother, Dream’s birth and his entire, often-wild, racing career.

The syndicate that ultimately bred Dream Alliance and the so-called Alliance Partnership was built on simple arithmetic: With 30 members paying out £10 a week, Dream could receive suitable training and care. But while the numbers that fund Dream’s professional career are easy to parse, the big emotions that fuel the personal side of his life are harder to track. For Vokes and her husband, along with Howard Davies, one of the few owners with any experience in horse racing at all, what starts as a bit of business proposition soon turns into something much more. Simply put: They all fall in love with him. That’s tough enough on its own (horse racing is, of course, a dangerous sport), but combined with the rampant classism the Alliance faces from the rest of the racing world, what should be an exciting time for all is often a painful, confusing and alienating one.

Bolstered by mostly seamless recreations, archival footage, creative animations and a series of interviews with all the important players, “Dark Horse” presents a full-bodied look at the offbeat and passionate coterie of owners who drove Dream to success.

Told in a relatively straightforward manner, the linear structure of Osmond’s narrative infuses “Dark Horse” with all the drama it could possibly need. Despite its emotional heft, the film also works as a rousing sports tale. The ups and downs that keep the story galloping right along speak to both the people behind the horse and the horse behind the people. It’s a true winner and a genuine crowdpleaser, a human story told well through one incredible animal.

This Article is related to: Reviews and tagged Dark Horse, Louise Osmond, Review