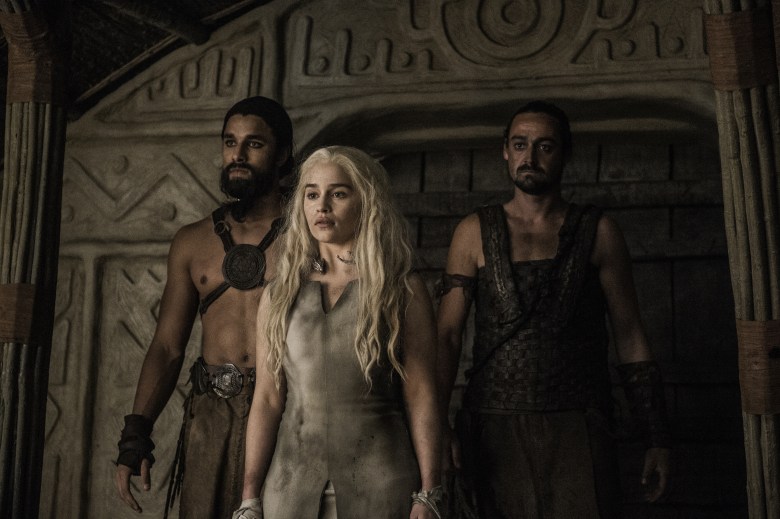 Every week this season, Indiewire will be bringing you a unique collection of viewpoints on “Game of Thrones,” as it is a show that elicits a unique sort of reactions. Our writers are well-versed in the world of the show and the culture surrounding it, and we look forward to seeing how their opinions fare in the cutthroat world of Westeros… Sorry, that is, the cutthroat world of television criticism.

Hey, in case you didn’t hear — Jon Snow isn’t dead anymore! And while he doesn’t seem to have suffered any major loss of personality, being dead has affected him, at least to the point of giving up on the Night’s Watch (after some hard decisions about vengeance). We also check in with Sam and Gilly, on their way to Sam’s home rather than the Citadel, Arya getting rehab for her need for vengeance and Daenerys being delivered to to the Dothraki widows. And we learn some pretty sad things as well, specifically about the fate of Shaggydog. Like the vast majority of living creatures related to the Starks, nothing good has happened to him.

For book readers, there are no two words more exciting that “Howland Reed,” who the books have positioned as the keeper of all the true history that the characters don’t know, but the readers suspect. Being a visual medium, the Three-Eyed Raven is a nice device to convey the same secrets, although the choice to hold back the reveal of what young Ned finds in the Tower of Joy feels a lot more motivated by the show’s sluggish pacing than specific dramatic concerns.

And even though important things happened this week — Jon hangs Alliser Thorne and Olly, then quits the Night’s Watch! Rickon is back! Shaggydog is dead! HOWLAND F’N REED, Y’ALL! — most of the episode dragged through more table setting, spending valuable time shuffling pieces around the board without advancing the story very far. For example, the long Sam/Gilly scene that really only tells us that they’re going to Sam’s family instead of the Citadel. It’s not that the scene is bad — it’s certainly not, and John Bradley and Hannah Murray have some really nice moments. But it’s an awfully long time to spend on only two side characters making a left turn. Ditto all the material with Arya; I get that we need to follow the stages of her journey, but these progressions are tiny. Don’t get me started on Dany’s Vaes Dothrak side quest? Even Tyrion’s drinking game was basically a scene about nothing happening.

This show really has found itself with its own Meereenese Knot problem. Usually the first few episodes of a season fall victim to this, but we’re running out of real estate to tell this story.

Dead Olly! DEAD SHAGGYDOG!!! What even is this, “Game of Thrones”? I know last week was gorier, what with poor Lady Walda’s miserable kennel death and all, but somehow this week’s misery felt more egregious. Why, for instance, do we need the long slow shot of Olly’s bloated face? If the answer is that Olly’s death cements Jon’s sense of failure, sending him away from the watch, it’s an unsatisfying justification. And how does Jon’s departure move any wheel of this story? At the wall, Jon was locked into a narrative I cared about: Not only was I eager for the grand tapestry event of a coming battle with Ramsay Bolton, I also was keen to admire the single-thread embroidery of a series of character-shaping negotiations between Jon and Davos, Melisandre and (for a moment, we could hope!) Sansa and Brienne. Instead, we’re threatened with another Stark-sibling near miss, another headfake around the connections that matter most.

And what do we get instead? Rickon and Osha delivered up as fodder for Ramsay’s shenanigans of gore; Dany intoned at by wearier-than-thou women who might become interesting but most likely (given this show’s track record) will not; Arya with eyes but nothing to look at; Tyrion engaged in his least witty banter in three seasons. Plus, as I said: DEAD SHAGGYDOG! I don’t know what’s worse: the camera forcing us to gaze at Olly or it rushing us past a dead direwolf without any time to mourn. I’m glad to see Gilly and I enjoyed Ned, but those small pleasures were small recompense for an episode that mostly made “Game of Thrones’s” most irritating mistake: confusing suffering — of either the characters or the audience — with actual story.

We got some screentime with four out of five Stark family members in this episode, beginning of course with Jon Snow. The bastard pre-death may have known nothing, but Snow 2.0 is all sorts of funny, decisive and has one helluva mic drop. I have been waiting for his watch to be over forever, and yes, now that he’s died, he can technically leave and fulfill whatever destiny that everyone is expecting of him. Finally! Huzzah! I’ll also say the same of Arya and her “Karate Kid” training. Get the hell out of Braavos already and meet up with Sansa.

As for Bran, his flashback didn’t have the same sort of impact on me as I’d expected, probably because there were too many characters we haven’t met yet, and it ended on a very annoying cliffhanger. But what I did glean was intriguing: 1) Ned Stark was a one-hairdo kind of guy, 2) Ned wasn’t always that honorable and 3) Bran can be heard in past visions. Hmm. That seems like some powerful mojo.

Finally, puberty and Ramsay have found Rickon, the youngest, oft-forgotten Stark. His predicament left me oddly cold except for that revelation about Shaggydog. I’ve never had any sort of attachment to Rickon since he’s never gotten much play, but I always felt that direwolves should be sacrosanct. Their murders aren’t just tragedies, but crimes. I better find out the whereabouts of Nymeria STAT!

As happy as I am that this episode moved briskly along, with some really juicy plot twists, it’s all somewhat bittersweet because I can almost taste the end on the horizon.

It seems that even death can’t cure Jon Snow of his biggest problem — his tendency to fret and brood about every challenge he faces. Watching a resurrected Snow walk around as if he had lost his purpose in life — and actually show regret at hanging the traitors who stuck knives in his belly — felt like a step backward for a character whohas always seem to get in his own way at just the wrong time. I guess it was too much for fans to hope that producers might let Snow gain some confidence and take on the holy mess that is the war for the kingdoms; instead, we get a flash of Goth Snow, petulantly tossing off his cloak and walking away from the men who risked their lives to resurrect his.

Far more satisfying this week was our time with Bran Stark, who is using his visions of the past to divine the truth behind some of the grand myths he had been fed about his father’s history. This means we’ll eventually get to see some of the seminal moments in the past which led to the current wars. Bran, for instance, is stopped from following his vision inside a tower where, book readers know, his aunt is dying. There are other great moments here: watching Varys extract information from a rebel collaborator, seeing Tyrion struggle to make small talk with the Unsullied commander, seeing Arya gain fighting abilities while blind. It is interesting to note how producers showed a naked Jon Snow but shied away from showing Daenerys nude when her clothes were ripped away during a key scene. Does this mean the script has flipped for nudity on “Game of Thrones”? I’m just hoping they give Snow a bit more backbone and get him out of the equivocations and self-doubt that makes the characters such an ordeal to watch at times.

We like it better when stuff really happens on “Game of Thrones,” and while the glimpses into the past this week were valuable, this week unfortunately dragged. It’s not every episode that can resurrect Jon Snow, but tossing around the head of a dead dog isn’t quite on the same level.