Review: 'Game of Thrones' Season 6, Episode 4, 'Book of the Stranger' Gets Lit 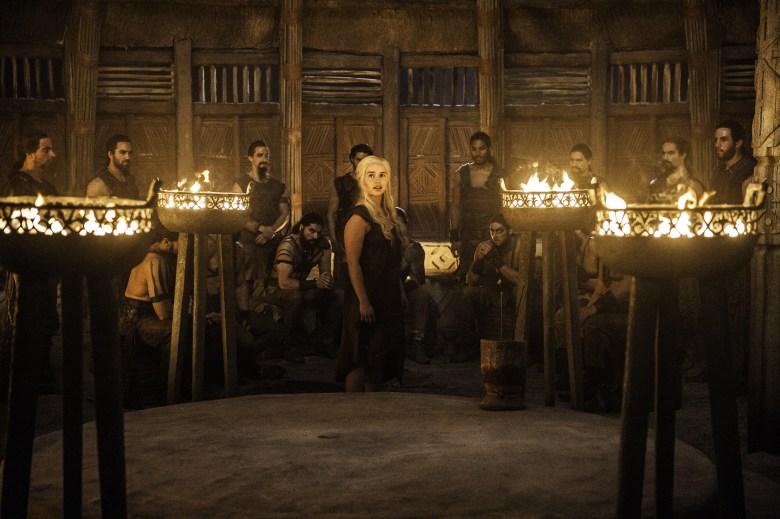 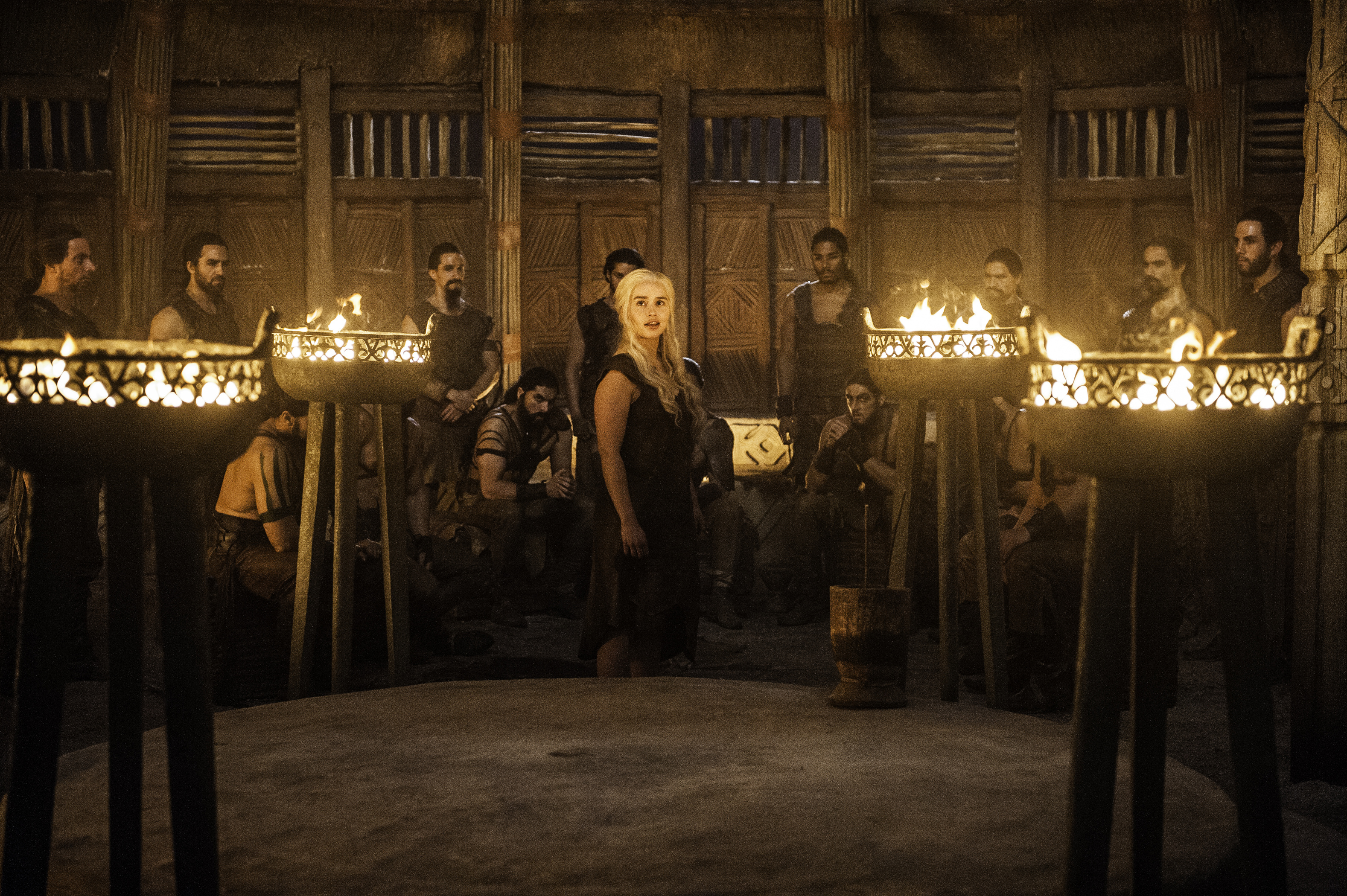 Every week this season, Indiewire will be bringing you a unique collection of viewpoints on “Game of Thrones,” as it is a show that elicits a unique sort of reactions. Our writers are well-versed in the world of the show and the culture surrounding it, and we look forward to seeing how their opinions fare in the cutthroat world of Westeros… Sorry, that is, the cutthroat world of television criticism.

What Happened This Week?

Jon Snow’s plans to leave the Night’s Watch and head south (or, you know, anyplace that’s not freezing cold) get the best sort of thwarted when Sansa Stark, accompanied by Brienne and Podrick, arrives safely at Castle Black. They hug joyfully, and two Starks have an on-screen conversation for the first time since approximately Season 3 of this show. It’s great to see brother and sister reunited, but things take a turn when Sansa tries to get Jon invested in the idea of retaking Winterfell from Ramsay Snow. She’s full of passion and rage, but Jon (who was dead two episodes ago, admittedly) is a bit tired.

That all changes, though, when Ramsy Snow, who has now captured their younger brother Rickon and murdered his guardian Osha (rest in peace, Osha), emails a taunt of a letter to Castle Black, containing more threats of rape and violence than a GamerGate attack campaign. Looks like a battle of Boltons versus Wildings and other houses of the North is on the horizon for domain over Winterfell.

Speaking of other uneasy alliances, Tyrion negotiates with the slavers for peace on generous terms, something that doesn’t go over great with advisers Grey Worm and Missandei. And Cersei and Jaime come to Lady Tyrell and Kevan Lannister with a proposition to take down the High Sparrow’s religious cult before Margaery Tyrell is forced into her own walk of shame.

Finally, Jorah and Daario track down Daenerys, who’s totally over hanging out with the Golden Girls of Vaes Dothrak, and also done waiting for the Khals of the city to decide her fate. So, Daenerys literally sets the patriarchy on fire, walking out of the flames to greet her newfound followers. She does this naked, yes, but she also sets the patriarchy on fire. So call it even.

An Episode Where Things Happened 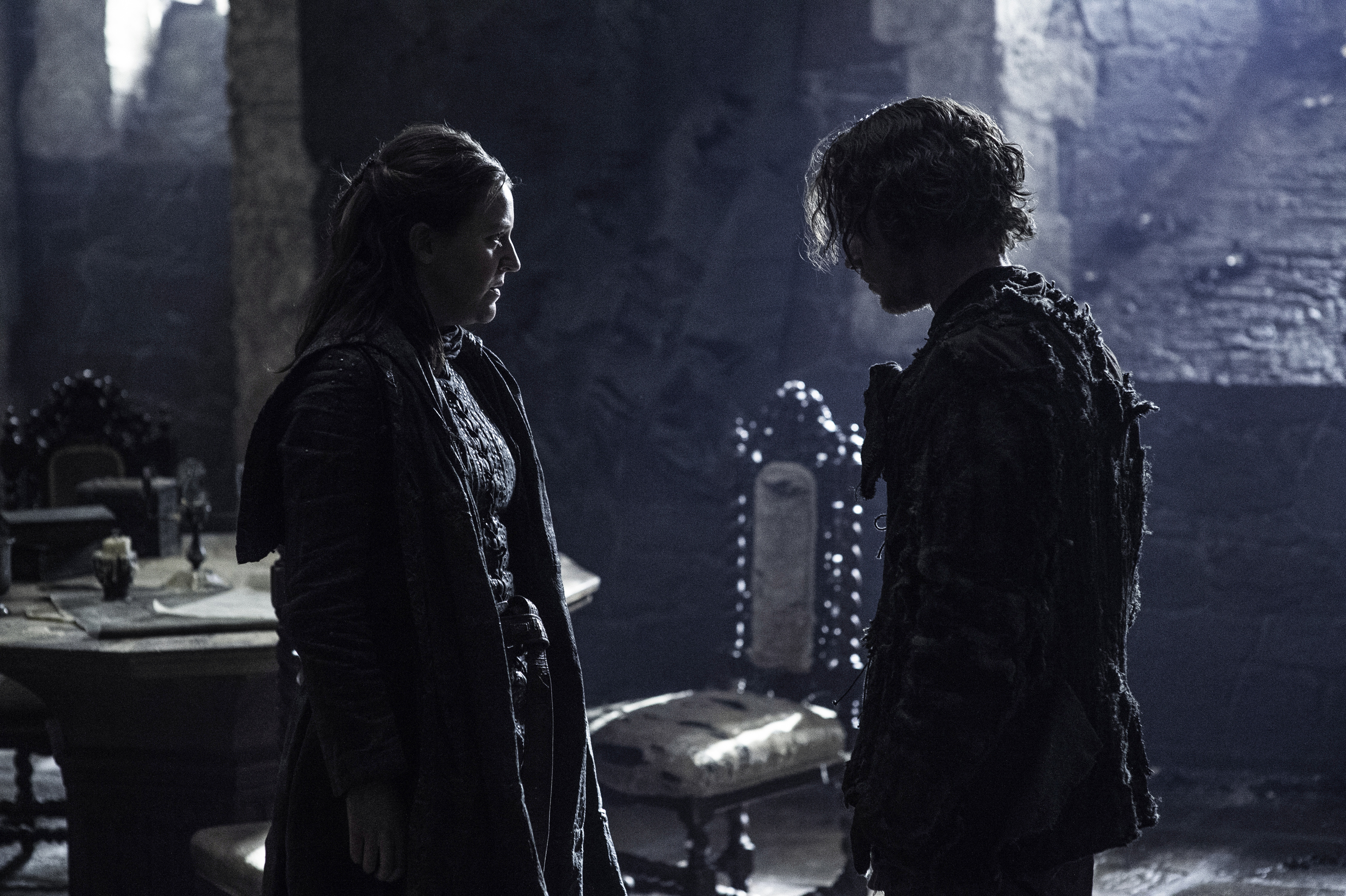 What a deliriously wonderful collection of homecomings, reunions and scheming to overthrow one’s enemies! There’s nothing I like less than the tendency of “Game of Thrones” to oh-so-narrowly snatch away even potentially satisfying encounters of important and wounded people (read: all the Starks), reveling in the cruelty of essentially using the 1997 rom-com “‘Til There Was You” as a roadmap to making its audience want to scream. So imagine my shock/suspicion when “Book of the Stranger” finally reunited Sansa and Jon and then, like, let them break bread together and stuff.

It was almost worth the inevitable distress that ended the episode, and even the revelation that Ramsay wants to use Rickon as dog food was kind of thrilling because it further bonded Sansa and Jon in a united quest. We indeed.

This was an episode where things happened – as is so often the complaint with “Game of Thrones,” not much has really happened in the last few episodes – mainly by doing something as wild as putting characters back together. From Sansa and Jon to Littlefinger and the world’s most horrible boy lord to Daenerys and her two hunks of burning (almost literally!) love, this episode was all about bringing people back together, even the ones who aren’t so keen on the idea (Yara, you really have got to stop alienating people), and the results were spectacular.

“GOT” has long luxuriated in keeping people apart, but five seasons in, it’s time to start fixing the broken bonds, and seeing what they can do together.

“Game of Thrones” At Its Best 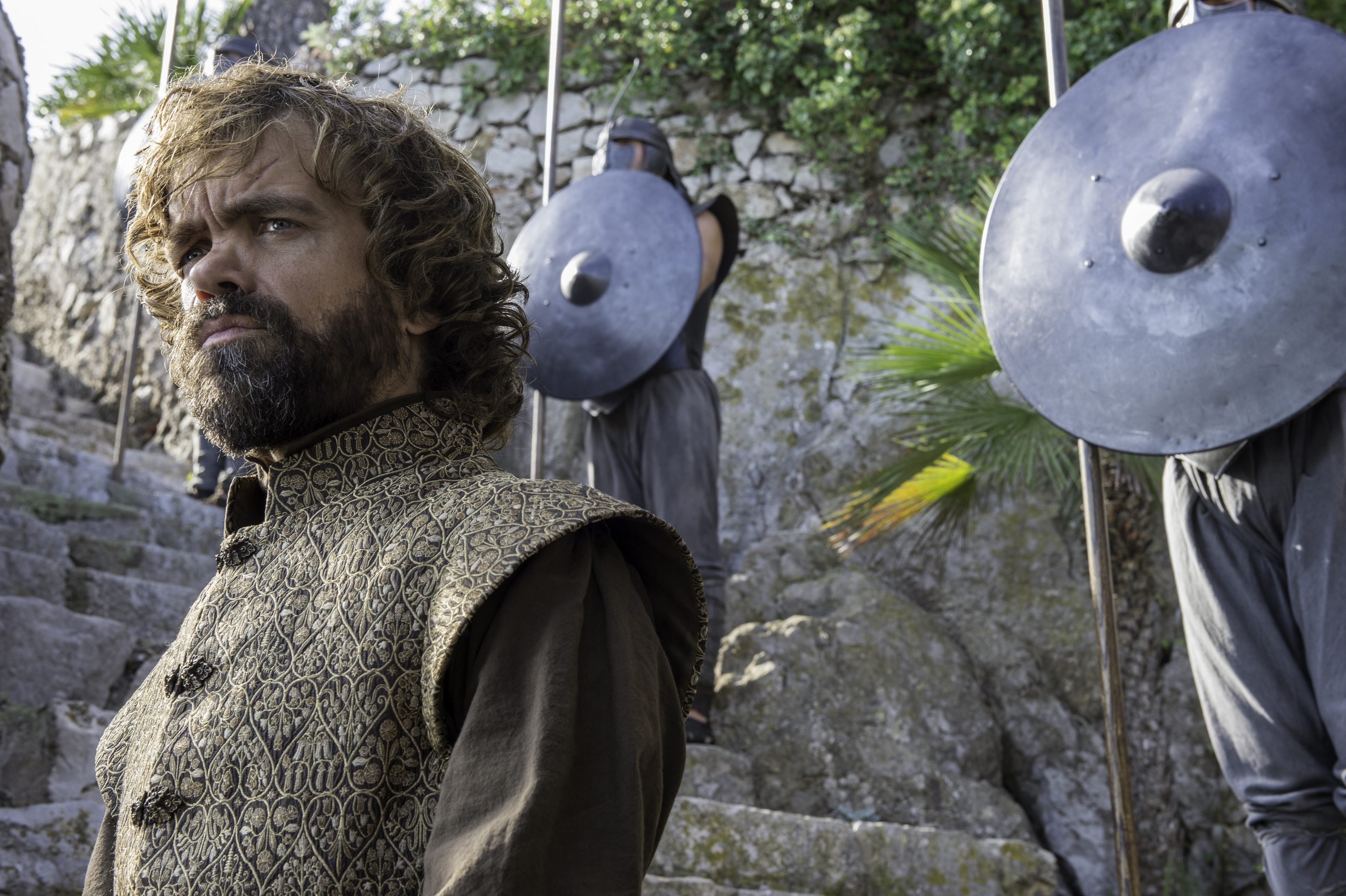 “You have no voice here,” Daenerys Targaryen is told, immediately before incinerating all the rapey Khals of the Dothraki and emerging triumphant, her breasts the best of the many weapons — swords, knives, words — this episode so lingeringly, carefully displayed.

Until that final moment, I’d been thinking in my mind: A-, as a grade for this episode. I was holding back my A, not because I wasn’t thrilled by the profoundly moving and long-differed encounter between Sansa and Jon; not because I wasn’t riveted by Brienne’s encounter with Melisandre; certainly not because I wasn’t seduced by the collision of complex theories of power, rendered by Tyrion and the High Sparrow around gender and class and race. This episode, I was thinking to myself as it progressed, was “Game of Thrones” at its best: simultaneously plot-driven, lyrically written and densely conceived. It’s been a long time, at least since the third episode of last season and maybe longer, since “Game of Thrones” delivered on this level. How effectively wrenching, to have Tyrion be so effective and also so horribly, brutally, wrong. How painful to have the narrow-minded High Sparrow deliver exactly the class critique our beloved Tyrion can neither conceive or implement. How incredibly, horribly, meaningfully true, that both of these intelligent and well-meaning straight white men would sacrifice women and queers and people of color on the altars of their political visions.

I was with this episode, for all its depth, from the moment Sansa finally became the badass we’ve been waiting for her to become: “I will do it myself,” she says, “if I have to.”  But it was really the final shot of Dany that sealed the deal for me, and made this episode an A. Sansa, Dany — they say you have no voices. But seriously, all of us out here are listening. Burn it all down.

READ MORE: For ‘Game of Thrones’ Season 6 to Stay On Top, It Needs to Avoid Season 5’s Big Mistake

The Little Things Made This One A Winner 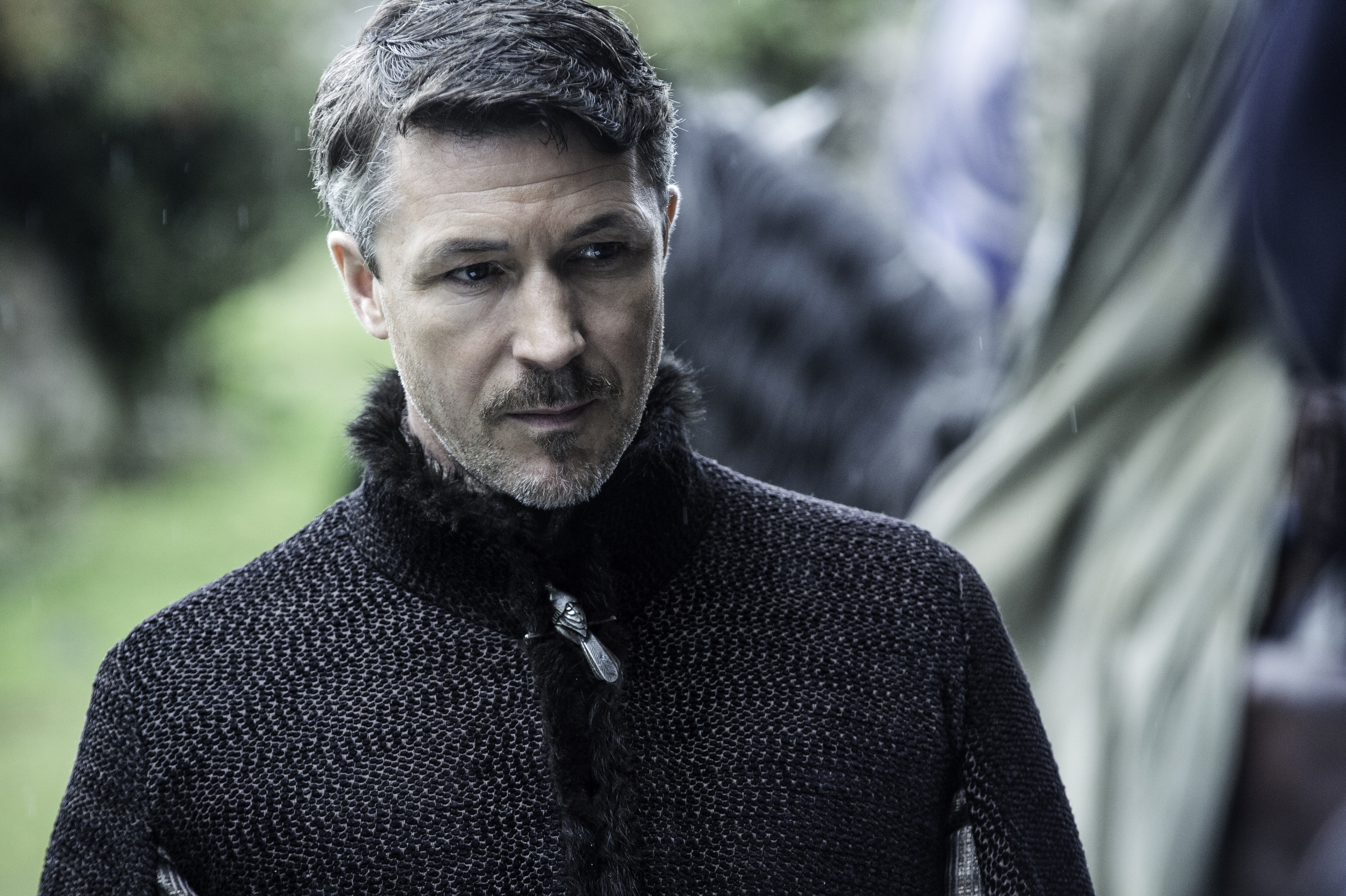 Okay, now we’re talking. After three episodes of moving pieces around the board, this week’s installment finally gives us some major events.

This show has become such a cultural juggernaut that it provokes endless debate, hand-wringing and mockery. But then we get an incredible, emotional scene like the Jon-Sansa reunion, which was so earned and so welcome. Even more powerful than that was the moment Sansa swore to conquer Winterfell herself if she had to, and kudos to Sophie Turner who imbued that moment with gravitas and star power.

I can’t help but wonder if the improved pacing of this episode is due to the lack of the Arya/Braavos storyline. Without Jaqen’s gnomic, ponderous Obi-Wan routine, everything seems to move along at a much nicer clip. Also, I was thrilled to finally see Littlefinger again – Aiden Gillen brings a much-needed sly energy to the show and I hope he doesn’t disappear again.

In an episode with big events like the Stark reunion and Daenerys proving again why they call her “The Unburnt,” it’s the little moments that made this episode sing. The half-smirk on Diana Rigg’s face when she realizes that Cersei isn’t out of the game yet; Margaery’s realization that she’s the future of her house, not her brother; Sansa apologizing to Jon for how badly she used to treat him; Missandei telling Tyrion to check his Lannister privilege; Tormund trying to flirt with Brienne.

So maybe all the table-setting can get frustrating sometimes. But once the pieces are in position, wow does this show know how to use them.

The “game of thrones” might come down to three women… 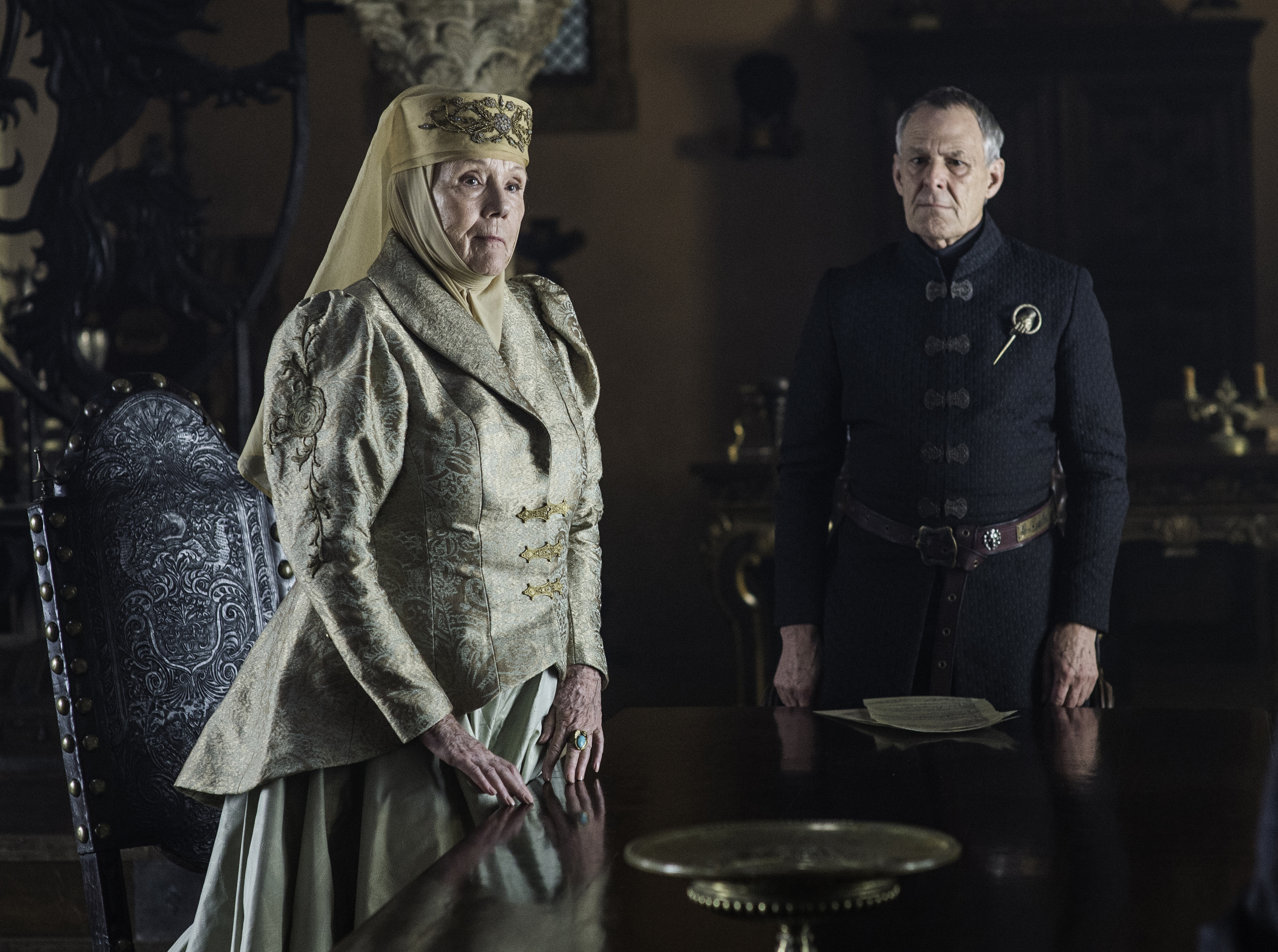 He’s faced stabbings, betrayal and death. But poor Jon Snow still doesn’t have as much backbone as his half-sister, a very pissed off Sansa Stark. That’s the ultimate message I took away from this week’s episode, which gave us a long-awaited reunion between two children from the house of Ned Stark. But even though Jon has fought in wars, beheaded men and killed those who succeeded in killing him, it took his sister to wander in, on the lam from the most murderous lord we’ve yet seen in “GOT”-land, and say what we folks sitting on the couch already knew. A monstrous villain has taken their home of Winterfell, and it’s time for Jon to stop his emo-cool pouting and do something about it already. (I understand his hesitation; men on righteous quests are usually the first to get clipped in the world of George R.R. Martin. But still.)

Actually, this episode was chock full of payoff moments that have been set up over the past few weeks. Tyrion is ably inhabiting his role as middle manager of Mereen, cutting deals with slavers to end the rebellion there by starving its funds. And watching Cersei maneuver to get a force of troops to enter King’s Landing and take out the religious fanatic High Sparrow was inspired. Of course, the show’s crowning moment came when Daenerys set a hut filled with Dothraki leaders on fire, using her fireproof body to survive the carnage and emerge as the queen we already knew she was. Once again, “Thrones” has delivered an episode in which women provide all the most important moments and drive the biggest plot twists. Sansa has grown from a weak, shallow girl into a leader with backbone to equal Cersei and Daenerys. Forget about Jon Snow and Ramsay Bolton; watching these three women fight for power may turn out to be the most compelling “Game of Thrones” the series offers yet.

This one was clearly a favorite, thanks largely to the reunion of Sansa and Jon, which seemed to give the characters a newfound purpose that has given the show a new energy. Add that to yet another moment that confirms Daenerys’s place as one of television’s greatest badasses, and you have an episode that signals great things for the rest of the season.

“Game of Thrones” airs Sundays at 9pm on HBO. Celebrate the return of the Starks below…