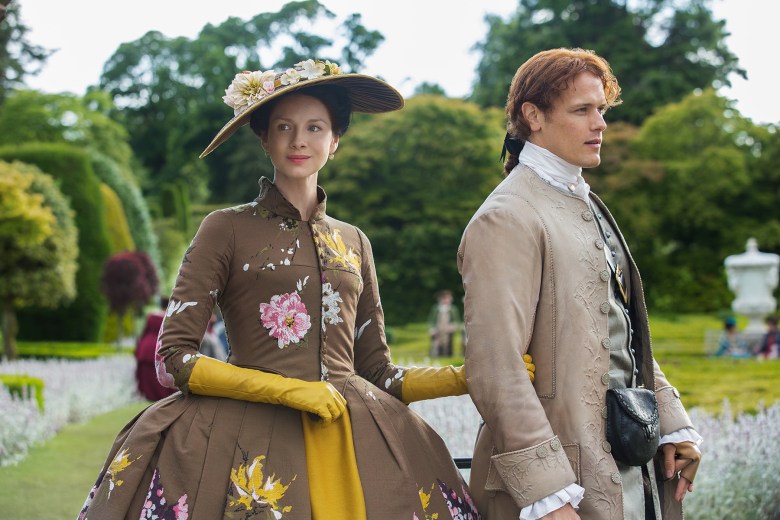 At its core, “Outlander” has always been a story between the two main characters — Claire and Jamie — and how they’ve overcome time and space to be with each other. That doesn’t mean Claire has always been able to discount her first love, Frank, even though she left him in another time period in order to be with her Scottish husband. That’s a plot point that has come into play a little more this season as Claire muses whether Frank could come into existence without one Captain Black Jack Randall. Viewers have been waiting for that character to resurface ever since his brother revealed he’s alive, and it finally happened Saturday night in cheery old Versailles. Naturally Claire would do everything she could to protect her first husband — even if that means betraying Jamie — but her pleas for Black Jack’s life absolutely put another black spot on her current marriage.

For Jamie, the Black Jack situation obviously played out a little differently. The man has been waiting for his chance to exact revenge on the guy who put him through so much torture, so it was only natural that the moment he saw Randall he challenged him to that illegal duel. Claire running to the police in order to have Black Jack arrested for a false crime instead was only the first betrayal in Jamie’s eyes. The fact that she could ask him to wait an entire year to kill a man like that — in order to save the other man Claire loves — is a pretty damned big ask. It was a huge step for him to agree to her terms, but just because he’s agreed doesn’t mean he’s going to let it go. Just when we thought those two were getting back on track, too.

Anytime the French King is onscreen, it’s guaranteed to lead to some comical moments, and his first encounter with Black Jack at Versailles was no exception. While the juxtaposition of the beautiful Versailles grounds and gardens with Black Jack’s resurrection made for a well-shot scene between himself, Jamie and Claire, it was King Louis’s treatment of the English soldier that stood out most. Black Jack is not someone used to taking orders and being made fun of, so it was fun to see him humbled for once in front of another man. Also, it was nice to see that not everyone who surfaces in France can speak perfect French. We were beginning to wonder.

Considering such a big deal was made of Claire’s pregnancy early on, it’s something that hasn’t been talked about too much on the show just yet. Aside from beginning to pick out names last week, the only indication that Claire is expecting at all is her small tummy. It was something that was finally addressed during Claire and Jamie’s blowout, and finally grew a stronger presence with this week’s installment. Jamie finally acknowledged his “wee bairn” by presenting Claire with the christening spoons, and Claire finally acted pregnant by mulling over being a mom and by showing some small hints at the morning sickness she’s only so far alluded to in the voiceover. Considering how important this child seemed at the outset, it’s about time to recognize that story a little more.

Considering the weight of last week’s rape scene, it was good that there was at least once follow-up scene in which Claire visited Mary to see how she was emotionally and physically holding up. The scene also served for an opportunity to put Claire in the middle of Alex and Mary’s budding relationship and to meddle as she saw fit. And meddle she did, when she learned the two were planning to be married. If there was any doubt as to how far Claire would go to protect Frank, that scene alone should have eradicated it.

As far as last week’s dinner party went, the plan worked when it came to separating the Duke of Sandringham and King Charles. Unfortunately, what Jamie didn’t see was that it also put the king in cahoots with another enemy, the Comte St. Germain. Now that Portuguese wine and 10,000 pounds of sterling are on the table, Jamie is in even deeper than he was before, him being a temporary wine merchant and all. It was only natural that Charles, believing Jamie to be one of his most loyal supporters, would offer up the Scotsman’s services to sell all that port, giving Jamie direct access to either help or sabotage the Bonnie Prince. If he and Claire are able to pull off that smallpox hoax, chances are it will be sabotage indeed.

With Jamie now pulled into a deal with the Comte, it was time for them to have an old fashioned drink together — at the brothel, of all places. Makes sense, given that’s where all of the other revolutionary chats have gone down, but it’s still amusing to watch two enemies make threats to each other while half-clad women prance around them. Each of the men finally put their cards on the table by revealing their “long memories,” with Jamie more or less threatening the Comte to stay away from his wife and stop trying to kill her. Sadly, it’s not clear that he completely got his point across.

Unfortunately Murtagh was fairly absent this week, with his one big scene being the one in which he apologized to Jamie for being unable to protect Claire and Mary. It’s a shame, given the comedy that could have been played from him being in jail for an evening; even though Jamie alluded to him washing the scent off, it’s always fun to have an actual cantankerous Murtagh on our hands.

Those expecting the infamous scene at the stables, in which Fergus more or less goes haywire with a horse and Jamie has to save the day, were undoubtedly disappointed by its omission in the episode. With so much ground to cover and Black Jack reappearing there (as opposed to at the Duke of Sandrinham’s) it was a necessary twist in order to keep the story going. But it was also a failed opportunity to explore the Fergus character a little more. His shenanigans were one of the most fun parts of the book and showcased why he was so loyal to Jamie through everything. While some of the upcoming scenes will surely help to build that up in the coming episodes, this was one of the few innocent moments in the book that really helped showcase that relationship. Not to mention it also helped proved Jamie’s worth at French court—something that perhaps isn’t as important now that the King seems regular again. Sometimes a little fiber is all it takes, kids.

“Outlander” airs Saturdays at 9pm on Starz. For more “Outlander,” check out our interview below.