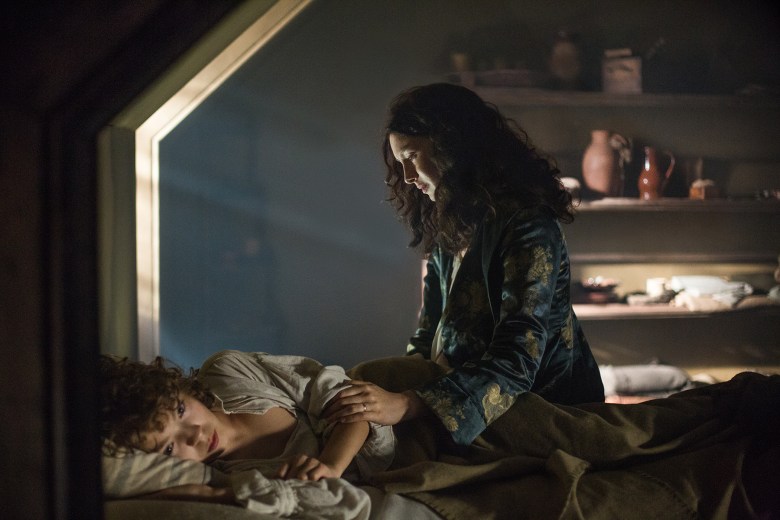 We begin with another taste of the future to come — the for-real future, specifically 1954 Boston, where Claire is looking at books with her red-headed daughter. The girl can’t be older than 7, which is apparently too young to be told about her mother’s previous adventures in Scotland (and in time).

Back in 1744, Claire is under the knife after last week’s complications with her pregnancy. Despite the reminder literally seconds ago that Claire lives past this, it’s a terrifying scene with a tragic conclusion — Claire’s baby daughter has “joined the angels.” Afterwards, Claire grapples with fever, nearly dying as a result, and is only saved by the covert intervention of Master Raymond. But her emotional grief is much more intense, especially due to Jamie’s past actions.

Jamie (largely absent this episode) has been arrested for his duel, and is now locked up in the Bastille — making Claire’s outrage over his betrayal all the worse, because he’s not there to defend himself or help her through one of life’s great losses. But her fury drains away when Fergus finally tells her why Jamie went back on his word and dueled Black Jack Randall. Claire then resolves to get Jamie out of the Bastille, at any cost, and even though she’s successful their reunion is a painful one. “How can we ever be the same?” Claire asks, and Jamie wisely replies “We can’t be.” But they’re resolved to heal and move on together.

When Claire begs Mother Superior for an audience with the King, she’s warned that in begging for Jamie’s release, she might have to surrender her virtue. First, though, Louis asks her to play judge in one of the strangest trials ever, one that reverses the script on the classic witch hunt. The Comte St. Germain and Master Raymond are brought before her, both accused of sorcery, and Claire’s cleverness leads to a scheme that would have saved them both… Except Master Raymond ensures that the Comte is dead by the end of it, so that the King’s thirst for blood is vanquished, and Raymond is banished from France, but with his life spared.

Oh, and the King does also demand an additional “price” from Claire, once the proceedings are over. Their time in bed is blunt and quick, barely mussing Claire’s hair.

I Put a Spell on You

When Master Raymond pays Claire a covert late-night visit, laying upon hands to cure her postpartum infection, Claire’s description of his actions hovers in a quasi-scientific, quasi-magical limbo, as she feels the “tiny deaths of the bacteria” rush through her. His powers are undeniable, though we might never fully understand how much of it is the 18th-century version of science, and how much of it is truly supernatural.

Meanwhile, the King’s sorcery trial was a (by comparison) enjoyable diversion for this episode (until, that is, the final moments with the Comte). Claire confronting the man who attempted to murder her, and declaring proudly that she is La Dame Blanche, a white witch, gave a character who had been buried in defeats so far this week an opportunity to shine.

READ MORE: The Business of Too Much TV & Six Other Top Longreads of the Week

A Villain Through and Through

Last week, we were spared the full extent of what happened to Fergus at La Maison when left alone with Black Jack Randall, but this week, we’re not so lucky, and our hearts broke along with Claire’s when the full truth came out. Actually confronting this terrible act made it easy to go along with Claire on her path towards forgiving Jamie and resolving to free him. But Black Jack as a character once again succumbs to near-cartoonish levels of villainy. Now that we know he’s on board with child rape, it’s official — he’s way more monster than man.

While at the beginning of the episode, Claire’s weeks of mourning in the hospital are condensed to some extent by voice-over, the show gave her grief its full due, thanks to a closing set of scenes that let Claire share her pain with Jamie and also dig more into the immediate aftermath of baby Faith’s death. Caitriona Balfe has maybe never been better, which is saying a lot given the range she’s been asked to play over the show’s run.

Also quite touching was Louise’s appearance at the hospital. While often depicted as shallow, Louise was the one to really help Claire begin the journey of letting go — the act of a real friend. Now that Claire and Jamie have the pardon necessary to let Jamie return safely to Scotland, we may not see her again. But change is an ever-present part of this show, and as these flashes forward to the future keep reminding us, Claire has quite the journey ahead of her.