Review: 'Preacher' Should Surprise — And Please — Believers and Atheists Alike 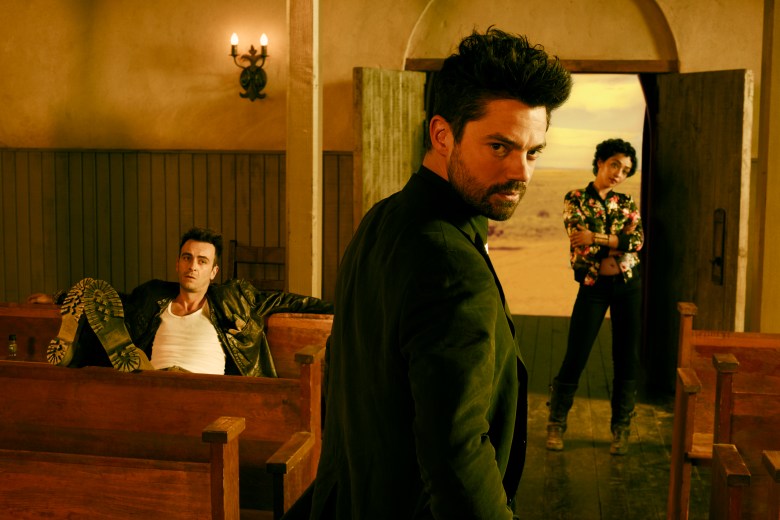 Liz: I read the first trade paperback of the brain-exploding (for the reader as well as the occasional character) “Preacher” in 2005, and if you had asked me then if it was the sort of story that should ever be adapted for the screen — influenced by the profane wit of writer Garth Ennis — I probably would have thrown some filthy profanities at you and smiled, because what a crazy notion! A preacher who’s terrible at his job infused with god-like powers, gets a chance to change the world with some help from his assassin ex-girlfriend and vampire best friend? The only thing more loco than that idea is the comic itself.

But it’s the year 2016, and, honestly, crazier things have happened in the last 11 years, as established Hollywood people/fans like Evan Goldberg and Seth Rogen get opportunities to bring stuff like “Preacher” to life. “Preacher,” somehow, feels special — even if the people in this world who were familiar with the source material are not mammoth. Like you, Ben?

Ben: In 2005, I was far more concerned with the future of “Arrested Development” than any comic book. (I’d transitioned out of my weekly “Green Lantern” splurges, sadly.) So, yes, I’m among the many (expected) fans of “Preacher” who will know and follow it solely because of what’s on screen. Yet what strikes me about Past Liz’s reaction is that I, too — having never heard of the comic book, let alone read it — feel like “Preacher” is something special. After watching only the first four episodes and carrying little to no attachment to its on-screen players, there’s just something…there.

I don’t know if I’d rank it among the elite TV shows of our era — especially when considering a year ago this week marked the end of “Mad Men” on the very same network set to debut “Preacher” — but the episodes move so smoothly while creating so many unexpected events, it’s hard to deny this show has that indefinable quality needed to boost a new series above its many, many competitors. Not to be too on the nose in a “Preacher” review, but I felt what Carrie Bradshaw would call the “zsa zsa zsu” for this show. Please, Liz, can you help me figure out why?

Liz: Well, it’s a big crazy universe, to be sure. Unlike a lot of AMC’s current shows, the word “grounded” has no application whatsoever. You’ve got angels, vampires, assassins, treasure maps and the literal Word of God zooming around the globe… I’d love to know what you first thought when you saw Arseface on screen. And yet at the same time, you have Reverend Jesse Custer at the center of things. Specifically, Jesse Custer and his crisis of faith. When was the last time a TV show starred a man of God? “The Father Dowling Mysteries”?

Ben: Actually, I’m glad you mentioned “grounded” because one of the distinct impressions I got from the series was that it was, in essence, held together by its location. Not to get all “Rural Texas is like another character in the show,” but the dirty town of Annville, with its gusty winds and western vibe, really helps add personality and a little bit of believability to the proceedings. How isolated the Preacher and all his friends are from the rest of the world makes you think maybe this could be happening out there in those towns we city dwellers often forget exist. Even if we know it’s impossible, you want to believe it is, and the setting helps encourage that desire.

As for Arseface, my first reaction was of the “How did they do that?” variety. Excellent makeup is the answer, but what I liked about his evolution — and this applies to all the characters introduced this far — is how they answer that initial question within the story. We slowly come to know what happened, not through blatant exposition, but through expert character development. He’s as far from a gimmick as one would think he would be given his name. Of course, you already know this, I imagine, given your background with the comics. So how did his and all the character introductions work for you?

Liz: It’s really funny that you ask that because I am fascinated by the changes made to these characters for the screen. Joe Gilgun nails Cassidy the Irish vampire on a level I’d never imagined possible, but while Dominic Cooper is physically a pitch-perfect Jesse, he’s on a very different journey.

Here’s the most important change I should tell you about, in terms of the adaptation: Once Jesse gets infused with his powers in the comics, he relatively quickly teams up with Cassidy and Tulip, and they go on a quest that removes them from Annville very quickly. The show, meanwhile, is so far very, very grounded in Annville, and it’s something that threw me at first, but now makes a huge amount of sense. Great TV shows tend to have a real sense of place, hence the “another character in the show” cliche, and basing (at least) the first season in Annville lets “Preacher” develop a real world for itself, in a way that legitimately feels sustainable for future episodes.

You use the word “believability” just now, which is not at all a word I expected to see in conjunction with this show. Is that something you were legitimately searching for, in a show that’s largely built on some fantastical ideas?

Ben: I think we’re always searching for a way to believe in a story, especially on television where you’re investing so much time. Whether it’s empathy, curiosity, attraction, or, in this case, all of the above, there’s good reason to want to play along and pretend this is real, and that’s largely a credit to the writers.

Though for “Preacher,” I really do feel an influence from executive producers Seth Rogen and Evan Goldberg. The series walks a delicate line between outrageous gore and black humor, which is an area these two have been pinning down as writers and directors, culminating with “The Interview” and, before that, “This is the End.” Rogen and Goldberg seem to have figured out how to make these wild stories work; finding the groove to keep “Preacher” from being too dark (rendering it unenjoyable) or too light (which could take you out of it, ruining the overall effect). And hey, we’re back to belief again; which, if you take it another way, works as a nice transition to how religion factors into the show. How does that element compare to the comics? 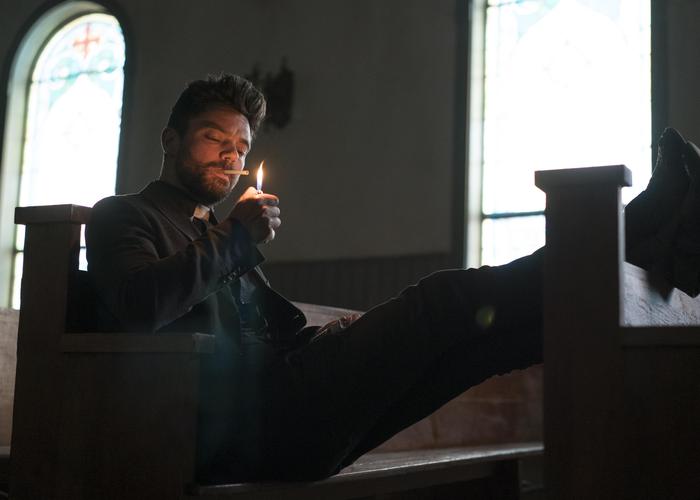 Liz: That’s the striking thing: Right from the beginning, the comics embrace the idea of god and enough of a Christian ideology to support literal angels and so forth… But honestly, it’s all presented by writer Garth Ennis on the same level as unicorns and fairy tales (which makes sense, given that Ennis is an acknowledged atheist).

Meanwhile, the TV show digs into Jesse’s journey as a man of the church having initially lost his faith, and sticks with him as he tries to become a genuinely effective preacher to his flock. Religion is much more a part of the story as a result, and not just the acknowledgement that at least once a week, an awful lot of people on this planet take some time to pay tribute to a higher power. Instead, there’s a real embrace of faith on the everyday average level, which for one thing is fairly individual to this show, and for another is not usually accompanied by hardcore mayhem on the level we get from the first episode on. What was your read on that?

Ben: I feel like we’re in a time when religion is finally able to be openly discussed on television, without fear of conforming to accepted standards. It doesn’t have to be overly preachy (pardon the pun) or aimed at a faith-based audience. Thanks to shows like “The Leftovers,” “The Path” and even “Grace and Frankie” in Season 2, the conversation has opened up to explore doubt — true crises in faith — in honest, identifiable ways. “Preacher” certainly isn’t on that level. It’s not asking tough questions aimed to challenge our beliefs in a real sense, and the idea that a vampire can walk the same church aisles that god himself did hours earlier leans into the POV you outlined as Ennis’.

Still, the decision to portray our preacher as a man of god intent on doing what’s right in his name — even as he’s tempted by great power — that speaks to a deeper level of recognition, of understanding, than the premise demands. Sure, its main message may end up being, “If you can believe in an invisible man in the sky who knows and controls everything, why can’t you believe vampires exist?” But using his faith as a means to gauge where his moral compass is pointing from episode to episode seems like an excellent choice, as it doesn’t keep him from exploring what makes the character so much fun (drinking, fighting, cracking wise, etc.). It helps me in recommending this overall, really. The layers and attention to detail make me believe (there’s that word again) this series has legs.

But, in addition to your thoughts on longevity — and since, somehow, this hasn’t come up naturally — can we also take a moment to talk about how great Ruth Negga is here? I mean, hot damn. She absolutely kills it!

Liz: 100 percent agreement! I actually meant to mention her before, while discussing how characters have shifted from the book to the show, because the way her character was brought into the comics is by far the most radical — and the most welcome — change. On the page, Tulip is by no means a pushover, but Negga brings a level of wit, power and charm to “Preacher” that is legitimately addictive. And it’s new and fresh in a way that makes me legitimately excited about how the show was allowed to be very different from the comic.

So to wrap things up, you feel confident recommending this show to people. But how would you describe it?

Ben: Perhaps the best way to describe it is by continuing to praise Negga’s performance and character. Tulip’s dynamic with Preacher is addicting, not only because there’s an overt physical connection that these two thespians know how to play up, but also because she’s the one trying to tempt his holiness away from the path of righteousness. She’s not evil. Far from it. But she’s as firm in her own beliefs — or lack thereof — as he is in his titular convictions. Tying in this kind of inherent emotional danger to their interaction worked wonders early on, and that’s how I’d describe the show to potential viewers: It’s easy to enjoy what’s in front of you — and rewarding to boot — but there’s deeper meaning in “Preacher,” whether you’re a believer or not.