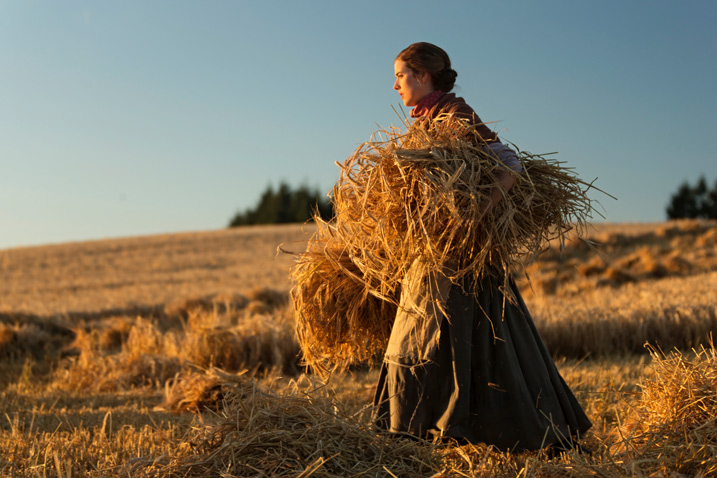 Every new Terence Davies film feels like a miracle, in no small part because most of them are. Not even Terry Gilliam has had such a tough time of shepherding projects to the screen. Davies’ style has alienated him to most financiers, his shame has alienated him from many queer critics and his nature has denied him the reverent mystique that clings to other auteurs who make films at the same rate — Davies has been butchered for many of the same qualities that make Terrence Malick a holy cow. He’s now 70 years old, and each of his successfully completed films arrives like a merciful act of the God to whom Davies no longer speaks.

Never has that been more true than it is of “Sunset Song,” which is faithful enough to Lewis Grassic Gibbon’s 1932 novel of the same name that the author is granted a possessive credit in the film’s opening title card. Gibbon’s story has been swelling within him since he was first enraptured by the BBC miniseries adapted from it in 1971, and at least 16 years have passed since he began actively trying to make his version (a span during which the project was killed and resurrected enough times to earn the holy hush that it inspires from those who worship at the altar of this determinedly irreligious auteur). But the real miracle of “Sunset Song” is that Davies, who has suffered so much — and found so little value in his suffering —  has made a movie that vividly captures the bittersweet beauty of life on earth. Davies has described Gibbon’s novel as “a story which deserves to be told.” Now it is a film that demands to be seen.

“Sunset Song” is in some respects a very simple story, one that has more in common with the plaintive domestic poetry of Yasujiro Ozu than the bucolic period mannerisms of Merchant Ivory. Beginning in the tumultuous years before World War I, the film tells of — and is told by — a tall Aberdeenshire farm lass named Chris Guthrie (Agyness Deyn) as she clacks along the circle of life from her family’s fair pocket of the Scottish countryside. Chris is a modest girl who casually dreams of a bigger life but feels moored to her family’s land. It’s easy to understand why: Cinematographer Michael McDonough glazes her world with the romance of remembrance. The exteriors are shot in gloriously textured 65mm, flaxen wheat fields assuming a gold timbre that looks neither fake nor faded. The interiors, shot digitally, bask Chris’ family home in a brittle light that would feel beatific if not for how it cowers from the faces of certain men.

Chris’ father, a devout and terribly violent brute played by Peter Mullan (natch), is prone to bouts of savage violence, and the low rumble of his voice usually anticipates a lashing. He is a scar across the land and an open wound for those who farm it. “You’ll need to face men for yourself,” Chris’ mother imparts during a quiet moment. “When the time comes, there’s no one can stand and help you.” And the time will come.

As with most miracles, “Sunset Song” is more likely to evoke awe than any one particular emotion; it accumulates an immensely tender beauty that fills up your heart like water rising in a well during a rainstorm. In part, that’s because the film gradually lilts away from the confines of linear storytelling, melting instead into myth as the war casts its shadow and Chris becomes less of an individual woman than an undying symbol of femininity and forgiveness. Allowing Chris to omnisciently narrate her own story as though she were reflecting on it from above, Davies submits his fictional heroine to the same semi-detached gaze through which he has reflected upon his own life in autobiographical films like “The Long Day Closes.” As with so many of his protagonists, Chris’ face is often framed by the glass of a window, as though she were watching her own life happen to her — here, that duality confers upon Chris the unique powerlessness of a woman who’s paralyzed by her patriarchy.

Davies’ is a cinema of nothingness — he sculpts by omission, telling vivid and impossibly wistful stories in the time between time, not unlike early cinema pioneers who painted with the absence of darkness rather than the presence of light. His films are rooted in memory and swaddled by nostalgia, suspended between an acutely remembered past and the unbearably painful present that it left in its wake. Davies’ more outwardly personal films have defined his lost idyll by measuring his distance from it. With Chris, he has a character understand these things in her own time, and the ache of it is almost too much to bear. She recognizes, like a far-flung Nick Carraway, that she is both within and without the world around her. Chris naturally translates that notion into her own language, her narration observing that: “Nothing endured but the land. Sea, sky, and the folk who lived there were but a breath. But the land endured. And she felt in the moment that she was the land.”

Davies — who can do more with a dissolve than any filmmaker since David Lean — galvanizes that visual with a breathtaking transition. Chris stands nude before a mirror, seeing her body through the first light of its adult purpose. An arresting image unto itself, it takes on another dimension as the shot fades into a wide view of the countryside raked with fire. The land was her, too. In that regard, anything that can be said of this film can be said of Deyn’s unforgettable turn, which is steady, self-possessed and altogether human. The English model has been trying to break into the film world for a few years without much success (previously, her most memorable screen role was as Aphrodite in “Clash of the Titans”). Now, having delivered this best performance of this half-finished year, another industry will be looking up to her. 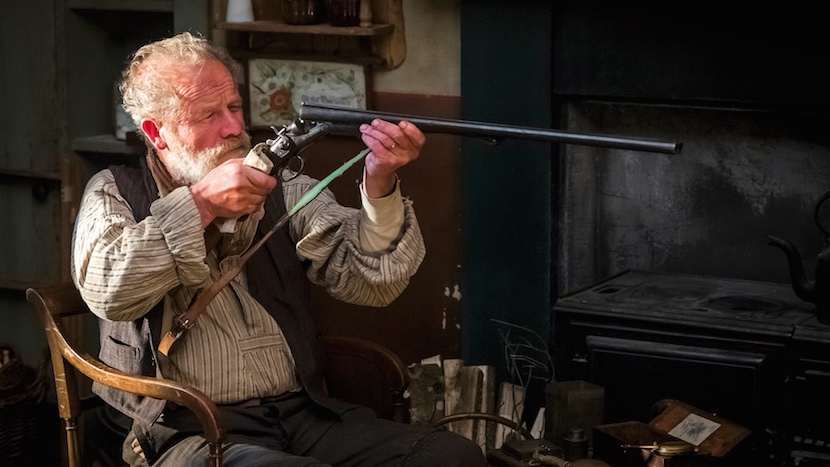 But the land alone endures. “Sunset Song” is so powerful not because it captures the detail of Gibbon’s period, but rather because it captures the fragility of any cherished past. It’s hard to say exactly how much time passes during the movie — it feels like decades one moment and minutes the next. This is a film that measures time not in days, months or years, but rather in cosmic degrees. Time doesn’t pass so much as it melts, Davies again using cinematic grammar to fit universes into his ellipses. The screams of Chris’ mother being raped bleed into her screams of childbirth nine months later. The crowd that sits around Chris and her husband on their wedding night evaporates as Davies skips over the rest of the reception, a chorus of noise instantly reduced to a single note. As the film goes on, the grains of life grow finer, and Chris can’t help but stare at her hand as they slip through her fingers.

It may sound grim, but as Chris matures from daughter, to orphan, to wife, to mother, and then ultimately to herself, Davies discovers something beautiful in his heroine’s growing menagerie of loss. In Chris’ forgiveness, the filmmaker finally appears to have found some for himself. Life may not be forever, or for everyone, but — as Chris says, herself — it can still be “a good harvest, in spite of all things.”