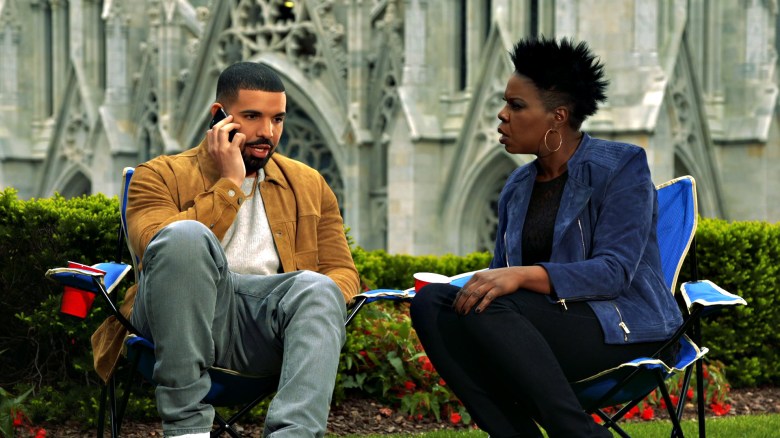 There’s no question that Drake loves hosting “Saturday Night Live,” and why shouldn’t he? The venerable sketch comedy series allows the rapper/former “Degrassi” star to show off his sense of humor, his excellent comedic timing and what’s admittedly some big-time charm. And “SNL” loves him back, a huge star that can perform double duty (both hosting and serving as musical guest) while clearly delighting the rest of the cast and getting the job done with ease. And what perfect timing for this season then, as Drake got to host the week after his latest album dropped, just as the forty-first season of “SNL” was cruising to its conclusion.

Sure, the timely promotion is nice, but “SNL” was the real beneficiary of Drake’s presence this week, as the two-time host did his damnedest to lift an (understandably) fatigue-filled main cast in a totally respectable show that, despite some excellent highlights, just never quite clicked together.

“Saturday Night Live” will end its forty-first season next week, its twenty-first episode since October, and while there will likely be a giddy uptick in energy for that final bow, Drake’s efforts on last night’s episode were admirable. He was the star of the show, ceded the attention by a sleepy cast and a very long season. Next season, can we bring him back a little earlier?

::gunshot noise:: ::siren:: Drake and the cast (even Lorne Michaels came out to play) put their own spin on rap battles – apparently very fickle, who knew? – with Drake going HAM on anyone and everyone who disrespects him in even the slightest of manners. It’s a smart idea played up by Drake’s almost unholy ability to switch between nice, happy, great-to-be-here guy and a very serious rapper dude in a matter of seconds. Here’s Drake strolling down the hall, happy as a clam, here’s Drake singing about offing you, rinse and repeat. It’s a good idea, well done. (And with a catchy as hell tune.) “Good job, that’s it? I’m doing great, you bitch!”

Beck Bennett’s Office Boss (Nick Patterson!) may not be for everyone, but it’s impossible to ignore the amount of pure physicality and dedication to the gag that this character takes. What’s even more impressive is that Bennett isn’t otherwise known for his physical humor, yet here he is, turning in the most fully formed, physically demanding character currently in rotation on the show. This edition of Office Boss also stood out because of its ability to marry a known character and a funny idea with current political events – the Republican Party needs to find someone else besides Donald Trump to be their presidential nominee – in a way that doesn’t feel the need to hit the audience over the head with a “hey, this is timely!” hammer. That was an issue last week, but this week’s episode found a way to tackle what’s obviously great comedic fodder with a kind of grace that’s been seriously lacking this season.

As great as it is to see Jay Pharoah performing in a sketch, the only joke of “Rental Car” was that his character had a funny accent that leaned too hard on its R’s. There’s certainly something amusing here – if only because the first half of the sketch is so relatable that I’m guessing at least half of the show’s audience gasped, “That’s happened to me!” while watching it – but the sketch itself is mostly formless and far too dependent on a one-note (or, really, a one-letter) gag to find anything better to turn into a good joke.

Like the best celeb hosts on “SNL,” Drake dives right into the work, isn’t afraid to be silly and appears to gel with the rest of the cast in a totally unfussy way. He’s also wonderful at crafting characters that ever so gently poke fun at his own persona, like “Black Jeopardy” contestant Jared, who is from Canada and just can’t understand why everyone thinks that’s so weird. Drake’s a reliable, fun host, and we should all be so lucky for him to join the Five Timers’ Club sooner rather than later.

Kate McKinnon may be the star of “Saturday Night Live” (consider this your weekly reminder that Kate McKinnon is the star of “Saturday Night Live”), but Cecily Strong is consistently creeping up behind her as the cast’s other most reliable female talent. With her panache for playing real dumb-dumbs and calmly playing against other performers when they’re going big and broad, Strong’s skills are deep and allow her to add special spark to any role, even something as literally background as a seemingly frivolous backup singer.

Sketch Most Likely to Go Viral: “Drake More Than A Meme Monologue”

It’s got everything: Drake making fun of Instagram, Drake making fun of himself, Drake making up memes and using existing ones to prove his point, Drake impersonating Rihanna (and even sneaking in a “we’re just friends” reference for good measure). This monologue was not just made for the internet, it might as well have been made by the internet, just spitting out memes and pix and snaps and gossip, all neatly packed into one of the best monologues we’ve seen in weeks.

This season of “SNL” has become far too reliant on the skills of non-cast members to play some of the show’s most important political roles, so how nice to see Bobby Moynihan (who is somehow approaching his ten-year anniversary on the show, and only getting better with each passing season) really getting to dive into a big political part for the show’s opener. Striking a weird balance between Chris Christie the Sad Sack and Chris Christie the Eager Striver, Moynihan finds both humanity and humor in the part.

Character Most Likely to Become a Franchise: Drake as Shane

He’s Hulk Hogan crossed with…Patrick Swayze from “Roadhouse”? And maybe, like, a time traveler? We’ve got no idea here, but here’s a wacky little character that Drake made entirely his own, complete with a story arc (Taran Killam?!), catchphrases and a few (mostly?) clear goals. Surely, a “professional chaperone” can show up again.

Subscribe to Indiewire’s TV Newsletter to stay up to date on the full season.

This Article is related to: Reviews and tagged Drake, Saturday Night Live, SNL