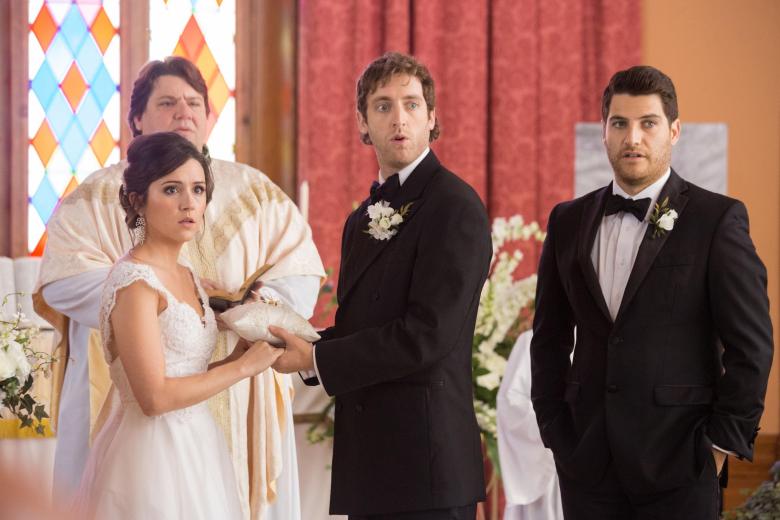 In the upcoming comedy “Search Party,” Daniel “Nardo” Narducci (Thomas Middleditch) has a small bachelor’s party with his best friends Jason (T.J. Miller) and Evan (Adam Pally). When Nardo expresses some doubt about his upcoming nuptials with his fiancee Tracy (Shannon Woodward), Jason stops the wedding halfway through, Tracy storms off and goes alone on their honeymoon vacation to Mexico. Nardo follows her to win her back, but he gets carjacked and left naked and penniless in a remote part of the Mexican desert.

Now, it’s up to Jason and Evan to go find Nardo before it’s too late while he evades drug runners and other dangers in order to win back the girl of his dreams. Watch an exclusive clip from the film above in which drug runners interrogate a coke-covered Nardo.

Directed by Scot Armstrong in his feature-length debut, “Search Party” also stars Alison Brie (“Sleeping With Other People”), Lance Reddick (“The Wire”), Krysten Ritter (“Marvel’s Jessica Jones”), Jon Glaser (“Parks and Recreation”), JB Smoove (“Curb Your Enthusiasm”), Jason Mantzoukas (“The League”), and more. Thomas Middleditch and T.J. Miller both currently star in Mike Judge’s “Silicon Valley” on HBO. Adam Pally is best known for his roles on sitcoms like “Happy Endings” and “The Mindy Project”; he appears in Jeff Baena’s “Joshy,” which premiered at this year’s Sundance Film Festival and was picked up for distribution by Lionsgate Premiere and Hulu.

Though “Search Party” was released internationally in 2014, it will be released in the United States this Friday, May 13.