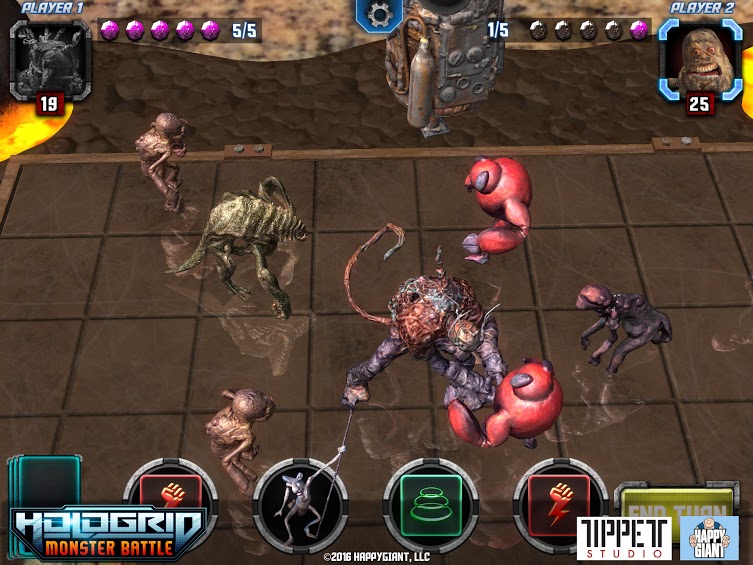 Initially available for mobile devices, “HoloGrid: Monster Battle” (made by indie gamer HappyGiant) uses physical playing cards to trigger AR creatures on a game board. Participants are then able to play head-to-head, either locally or remotely. It’s akin to such collectible card games as “Magic: The Gathering” or “Hearthstone: Heroes of Warcraft.”

The goal is to raise $100,000 in the next 33 days to bring the game to Android and iOS. Stretch goals could bring it to other platforms while offering 30 creatures (more than 100,000 team combinations). It’s a one-time-fixed price with no in-app purchases.

After making iconic creatures for decades (most popularly for “Star Wars” and “Jurassic Park”), Tippett reintroduced his HoloChess scene for “The Force Awakens,” and has recently been working on a feature, immersive theme park ride and PC ad campaign for China. He was approached two years ago by HappyGiant president Michael Levine (formerly with LucasArts) about dabbling in the CCG/AR hybrid board game.

“I made a lot of these characters many years ago and some are from the recent ‘Mad God’ shorts, and Mike chose which ones he wanted to represent in this world,” Tippett told me. “We take photographs of the actual models and [HappyGiant] stitches them together into CG images complete with textures and colors. The potential [of VR] is unlimited, but it’s like the Wild West. At least it’s a level playing field for a lot of creative people to come up with how you can make interesting work with this technology. Every time we change formats, it requires new design and narrative abilities.”

Why Augmented Reality? “I’m very interested in the future of AR gaming and those applications,” Tippett said.

“And this vision of HoloChess that you read about is associated with AR,” added Levine. “Hopefully, if we get the support we’re looking for, we can get it out before Christmas and our backers can grow it from there with booster packs and potentially take it to new platforms.”

This Article is related to: Interviews and tagged Interview, Star Wars, Video Games