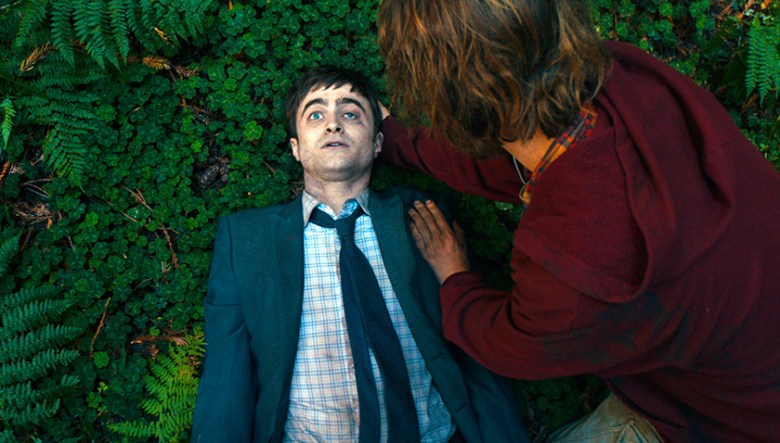 In “Swiss Army Man,” Hank (Paul Dano) finds himself stranded on a remote island after a boating trip has gone awry. Seeing no way out of his predicament, Hank decides to end his life, but just as he’s about to hang himself, he sees a corpse (Daniel Radcliffe) washed up on the beach. Slowly, Hank finds hope in this corpse, eventually forming an intimate, surreal relationship with the dead body he calls Manny. He starts to use Manny as a “multi-purpose” tool, discovering that his farts can power him across an ocean, and that his constant erection can be used as a compass. Ultimately, Hank discovers the beauty and joy of living again with the help of a dead body. Watch the red band trailer above.

“Swiss Army Man” premiered at this year’s Sundance Film Festival. The film garnered some festival attention after many people walked out during the screening supposedly because of the coarse subject matter. (A24 eventually picked up the film for distribution.) It’s the first film from The Daniels, a directing duo best known for their music videos for groups like The Shins and Chromeo along with a variety of short films. Paul Dano is best known for his work in “There Will Be Blood,” “Love & Mercy,” and “Little Miss Sunshine.” Daniel Radcliffe is, of course, best known for playing Harry Potter in the “Harry Potter” film series.

“Swiss Army Man” will be released into theaters on June 24th.