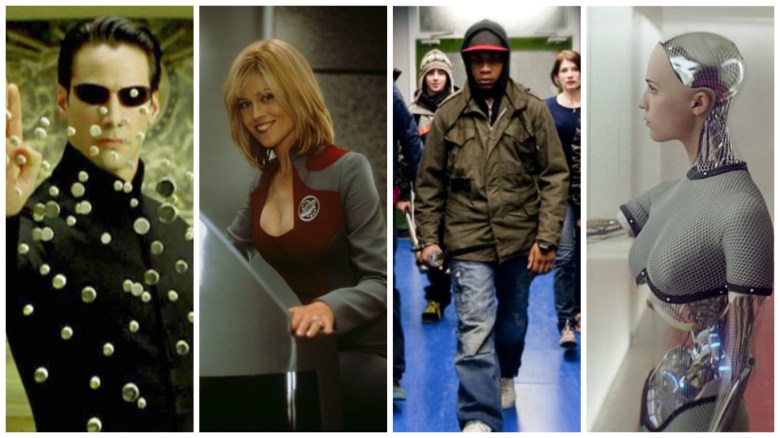 At some point since IndieWire launched 20 years ago, the present started to catch up with the future that movies imagined for it. “Rollerball” was set in 2005, “The Postman” took place in 2013, and the 1989 “Back to the Future Part II” saw Marty McFly riding a hoverboard on October 21, 2015. We might still have a ways to go before “Jaws 19” is playing in theaters, but “Blade Runner” is right around the corner. (The fashion world hasn’t quite kept pace with Ridley Scott’s neo-noir classic, but our planet’s smog game is definitely on point.)

Two decades ago, we had Steve Jobs, Bob Hope, and Johnny Cash. Now, we have video phones in our pockets, holograms that resurrect dead celebrities, and virtual reality so widely available that it comes with the Sunday copy of the New York Times. “Face/Off” may not yet be a reality (as far as we know), but Snapchat manages to get the job done just fine.

Every step of the way, movies have been there to help us anticipate and make sense of this brave new world. “The Matrix” borrowed from sources as disparate as Philip K. Dick and Rainer Werner Fassbinder to brace us for a world in which people sacrificed a barren reality in favor of a glossy virtual alternative. “Minority Report” illustrated how ethics have to evolve at the speed of technology. “Ex Machina” compelled us to reconsider the definition of what it means to be human, and a surge of time-travel films from around the world forced us to consider the tenuous role of the present as it’s suspended between yesterday and tomorrow.

READ MORE: Here’s How to Shoot a Sci-Fi Film on a Low Budget

The sci-fi genre is as vast as the future itself, but in order to make sense of where we are — and take stock of how far we’ve come — the Indiewire staff has compiled a list of the 20 best sci-fi films of the last 20 years, presented in chronological order.


If you scan through the other 19 picks on this list, you’ll see that laughs can often be in short supply. It’s a good thing this pitch-perfect execution of the “What if aliens thought ‘Star Trek’ was a real record of Earth history?” premise has enough for all the rest of them. But not only is “Galaxy Quest” rare as a sci-fi film built on comedy, it’s the rare parody that doesn’t look down on any of its characters. Not Tim Allen’s pompous semi-Shatner Jason Nesmith, who sheds his Hollywood ego to become the true commander of a ragtag group of C-listers. Not the Thermian leader Mathesar (Enrico Colantoni), a sincere protector of a dying race, despite having trouble grasping the twin concepts of dramatic representation and voice modulation. Not Guy Fleegman (a career-best Sam Rockwell), the former walk-on guest star who effectively stares down his crippling fear of mortality. Even the obsessive computer nerds get to be heroes! Few movies in the past two decades are as purely enjoyable as watching Sigourney Weaver, Tony Shalhoub, the late Alan Rickman and the rest (oh hey, Rainn Wilson!) work with a stockpile of one-liners capable of supporting its own small lexicon. (“Did you guys ever WATCH the show?“) — Steve Greene

“The Matrix” is a Hollywood sci-fi action blockbuster that was spawned from the imagination and influences of its creators, The Wachowskis, and not an established property like a comic book. By seamlessly weaving together those influences — stories from cyberpunk science fiction, fight choreography from Hong Kong action films, the cinematic style of Japanese animation (The Wachowskis showed Hollywood execs “Ghost in the Shell, and said, “We want to do that for real”), concepts of religion and philosophy, and cutting-edge digital special effects (“bullet time”)  — the Wachowskis created something that was surprisingly fresh and remarkably unified. The biggest flaw that can be poked in “The Matrix” has little to do with itself, but rather how the potentially rich mythology the film sets up was never delivered upon in the failed sequels: “The Matrix Reloaded” and “The Matrix Revolutions.” — Chris O’Falt


A year after the release of “A.I. Artificial Intelligence,” Steven Spielberg unleashed another wildly ambitious science-fiction project in theaters, the Tom Cruise star vehicle “Minority Report.” While “A.I.” filtered its themes of morality through a story akin to a fairytale, “Minority Report” found Spielberg in visceral action mode, crafting a neo-noir chase thriller that’s as much a character study of a father battling grief as it is a science fiction fable about the battle between free will and fate. The film is set in a future in which police are notified of crimes before they happen (a system known as “PreCrime”). But when Cruise’s police chief sees his own name appear in the system, indicating that he’ll kill a man he has never met before, he’s forced to go on the run. Are his actions an attempt to avoid his destiny? Or are they simply the steps leading him to it? It’s a cerebral debate that is as thrilling as any action set piece Spielberg dazzlingly imagines, all steered by Cruise’s agonized performance. — Zack Sharf


One of the only movies that ever used the shoddiness of early digital cameras to its advantage, Danny Boyle’s “28 Days Later” is the scariest zombie movie ever made — yep — in part because its gnarly, lo-fi aesthetic helps capture the insanity and hopelessness of a world gone mad. Its astonishing opening sequence, in which a naked Cillian Murphy walks through an empty London morning, immediately plunges you into a post-apocalyptic nightmare in which every respite is temporary and every incidental noise like a dinner bell for a horde of sprinting cannibals. But Boyle’s film doesn’t find its highest gear until its daring third act, when it sharply pivots away from the wastelands of metropolitan Britain and towards a military outpost where our heroes learn that humans are scarier than their undead corpses can ever be. — David Ehrlich

Technically, “2046” is the third chapter of a shared story with two previous films by Wong Kar-wai (“Days of Being Wild” and “In the Mood for Love”), but as Boston Globe’s Ty Burr more aptly described it, it’s less a sequel and more “the third side of a prism through which Wong can shine light on a vibrantly fallen world.” In general, Wong is a filmmaker unconcerned with classical narrative construction, so it’s a mistake to try to untangle these four different storylines, stretching from the 1960s to a future world of 2046, where a character falls in love with an android. Instead, Wong creates meaning with the subtle gestures of movie stars, bold cuts sometimes connecting seemingly unrelated elements, sweeping camera moves, atmosphere thick with smoke and rich with color, and layered compositions that contain some of the most stunning production design and cinematography of the last three decades. “2046” evokes a sense of the pain of love and the joy of remembrance, but above all else it’s what the late great Andrew Sarris described as “an incomparably sublime work of art, a triumph of lyricism over narrative in the cinema, and the most exquisite homage to the beauty of women it has ever been my privilege to witness on the screen” – CO

Up next: An indie mindbender for the ages, camera wizardry and more love stories across centuries

This Article is related to: Features and tagged Movies, Sci-Fi