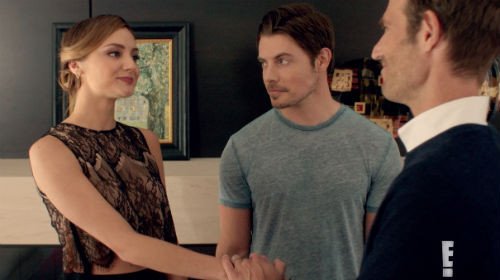 The first trailer of E!’s second scripted drama series “The Arrangement” has been released and it’s hard not to find the storyline a bit familiar.

Starring Christine Evangelista, Michael Vartan and Josh Henderson, the show follows Megan Morrison (Evangelista), a beautiful actress who auditions for a role in a summer blockbuster playing opposite Kyle West (Henderson), the movie star of the moment. The two share amazing chemistry and quickly start a heated romance.

Megan’s relationship with the celebrity soon takes an unexpected turn when Kyle’s mentor Terrence Anderson (Michael Vartan), leader of a self-help organization called the Institute of The Higher Mind, persuades him to offer her a $10 million marriage contract that will make Megan’s dreams come true and change her life forever. Confused as to what to do, we soon find out that the aspiring actress has secrets of her own that she doesn’t want revealed.

The pilot was written by Jonathan Abrahams and Jimmy Fox helmed production.

When news of the series was first announced, many speculated it paralleled the publicized relationship between Tom Cruise and Katie Holmes and Scientology. However, this led E! to issue a statement saying that the show was not inspired or based on anyone is particular. Check out the trailer above and make your own conclusions.

This Article is related to: Television and tagged Michael Vartan, The Arrangement