'The Birth of a Nation' Live Poster: Nate Parker Asks You to Stand With Him in New Look at Sundance Winner 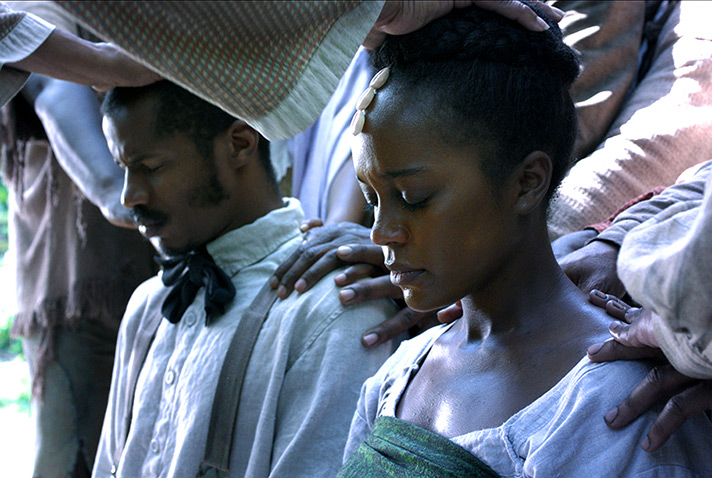 Fittingly for a historical drama that takes its title from a classic film whose links to racism severely complicate its legacy, “The Birth of a Nation” made history when it premiered at Sundance in January. Writer/director/star Nate Parker’s biopic centering around Nat Turner was bought by Fox Searchlight for a record-setting $17.5 million upon its premiere and is already being pushed as a serious awards contender. Months ahead of its theatrical release, the film is the subject of an aggressive marketing campaign to build and maintain buzz. A “living poster” is the newest look at the film.

READ MORE: Sundance Review: The Brilliance of ‘Birth of a Nation’ Is Bigger Than the Movie

Really a 30-second video, the image begins as a close-up on Parker before zooming out. Like a blood-stained image on parchment, it morphs into an American flag whose colors do indeed run. All the while, a monologue from Parker can be heard in the background: “The first shall be last. The last shall be first. Stand with us.”

READ MORE: Nate Parker’s ‘The Birth of a Nation’ Sells to Fox Searchlight in Biggest Sundance Deal Ever

Turner was a slave and preacher who led a rebellion in Virginia in 1811. Armie Hammer, Aja Naomi King, Jackie Earle Haley, Penelope Ann Miller, and Gabrielle Union co-star alongside Parker in the film, which won the Audience Award and Grand Jury Prize in the U.S. Dramatic Competition at Sundance. Fox Searchlight is releasing it on October 7.

This Article is related to: News and tagged Nate Parker, Sundance Film Festival, The Birth of a Nation (2016)