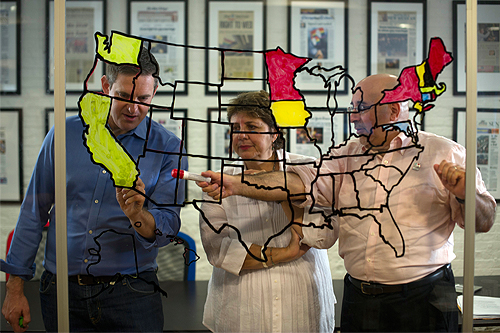 The new intimate, behind-the-scenes documentary “The Freedom to Marry” traces the marriage equality movement’s historic progress and delves into the masterminds behind one of the greatest civil rights movements of this generation. The film follows Evan Wolfson, attorney, founder and president of the organization Freedom to Marry, and father of the same-sex marriage movement, and pioneering civil rights attorney Mary Bonauto, who argues the landmark “Obergefell v. Hodges” decision, which argued the fundamental right to marry was guaranteed to same-sex couples under the Constitution. The documentary celebrates the historical day and profiles the numerous LGBT advocates and heroes that worked for decades to see that dream come true. Watch an exclusive trailer for “The Freedom to Marry” above.

“The Freedom to Marry” is directed by Edward Rosenstein who has produced and directed numerous documentaries over the years, including “Waging a Living,” which examined the working poor in America, “School Play,” about an elementary school production of “Wizard of Oz,” and “The Gospel According to Mr. Allen,” which examines the Addicts Rehabilitation Center in Harlem. Rosenstein teaches documentary filmmaking at the New York Film Academy, lectures frequently, and is extremely active in the non-profit world, particularly for children’s causes.

“The Freedom to Marry” will have its world premiere at the Frameline Festival on Saturday June 25th at the Castro Theater in San Francisco at 1:15 pm.

This Article is related to: News and tagged Frameline Film Festival