'The Good Wife' Ended Full Circle, But Its Emmy Hopes May Not 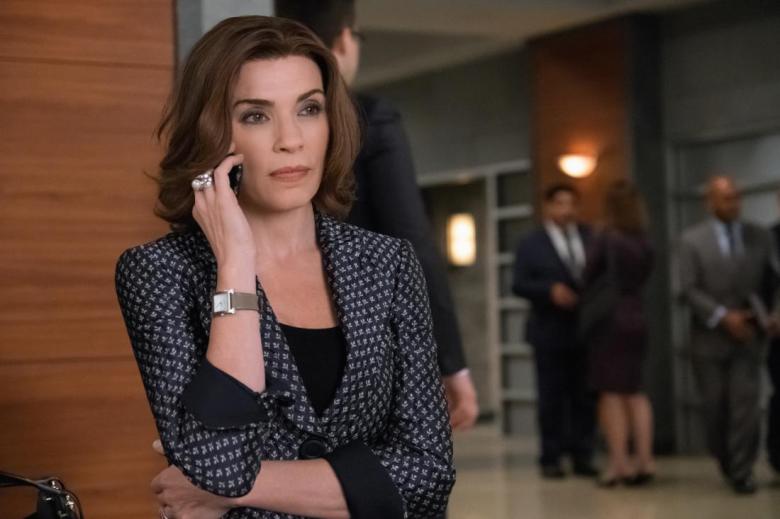 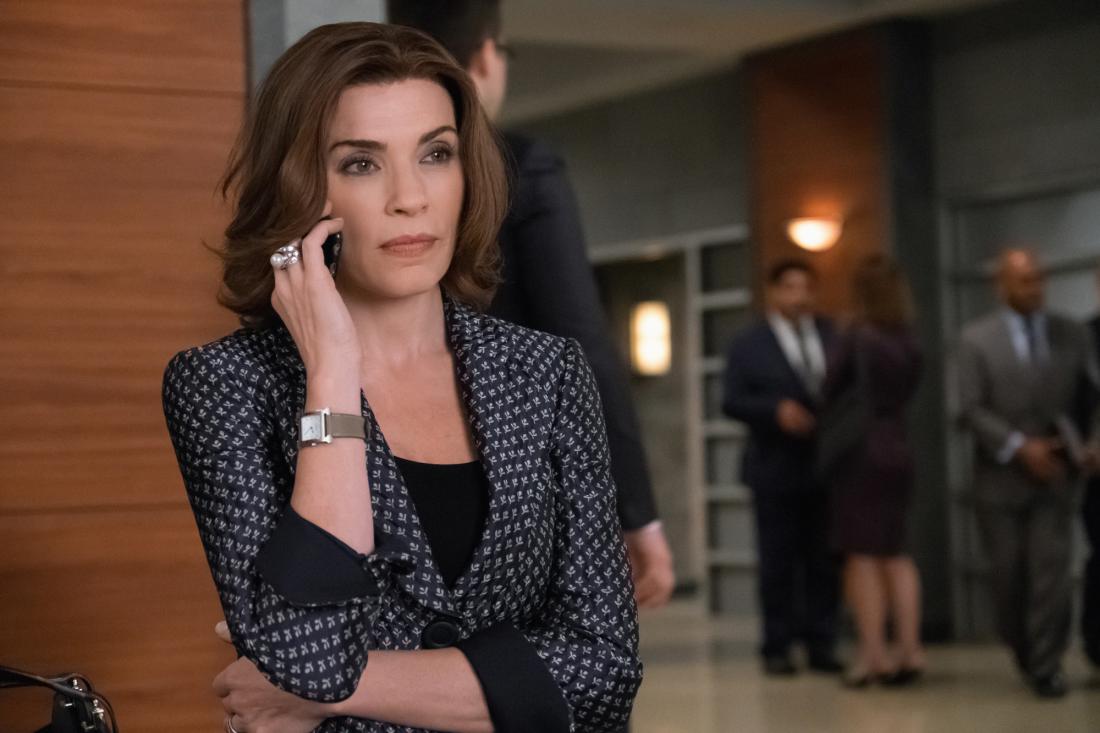 In a long, wan service corridor near the hotel ballroom
where her husband, Peter (Chris Noth), resigns his governorship, Alicia
straightens her pantsuit, smoothes her hair, and stiffens her expression into
the impenetrable mask she wore when we first met her.

READ MORE: ‘The Good Wife’ Series Finale Wasn’t Great, But It Still Treated Us Like Grown-Ups

Few series strive for, much less achieve, a genuine sense of
wholeness, and despite the palindromic precision of its episode titles,
“The Good Wife” is no exception. After the murder of Will Gardner (Josh Charles) in the fifth
season’s raw, restless “Dramatics, Your Honor,” the painful capstone
to the brilliant sequence that began in Season 4 with “Red Team, Blue
Team” and peaked with the series’ finest hour, “Hitting the
Fan,” the narrative’s procedural backbone slackened.

Invention
(“Mind’s Eye,” set to Alicia’s inner monologue) segued into
convention (Alicia’s incomprehensible affair with Jeffrey Dean Morgan’s rugged
private investigator, Jason). In order to shape “End” into a mirror
image of “Pilot,” with that admirably risky denouement, the Kings
shoehorned seven seasons’ worth of characters into a singularly tortuous trial,
and lost sight of the deft legal machinations that defined “The Good
Wife” at its best.

Restructuring arguments, finding loopholes, erecting Chinese
walls: The series excelled at dramatizing technicalities, focusing not on the
righteousness of “justice” but the language of “the law,”
which Alicia and an engaging legion of allies and adversaries deployed to ever-shifting
ends.

Attempting to reverse wrongful death sentences and defending
wealthy serial killer/inveterate creep Colin Sweeney (the inimitable Dylan
Baker) occupied the extremes of this spectrum, but in between “The Good
Wife” approached all manner of cases, clients, prosecutors, plaintiffs,
and judges with nuance, or at least the firm conviction that “legal”
and “illegal” are not synonyms for “right” and
“wrong,” let alone “good” and “evil.” 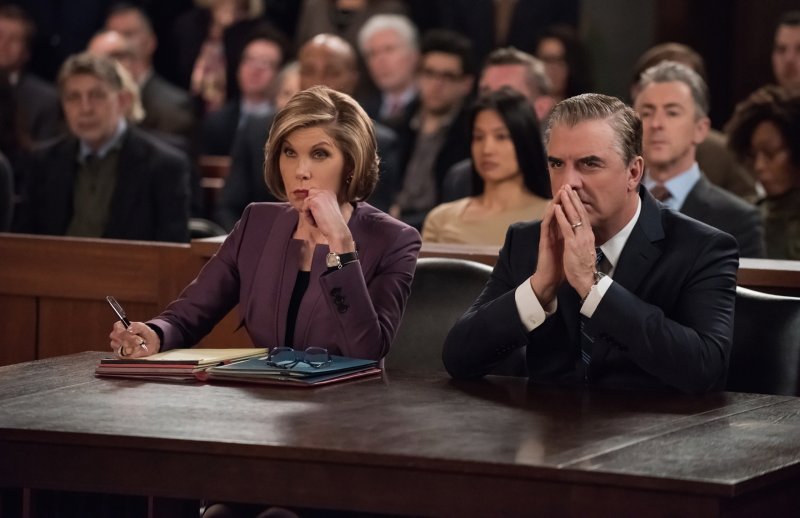 It’s the series’ long-established understanding of Alicia’s
chosen profession as amoral, and thus of Alicia as an anti-heroine, that sustains
the symmetries of the finale’s closing sequence — a return that is also a
reversal, a metamorphosis we might have seen from the start. As in
“Pilot,” the camera holds close to her and Peter’s clasped hands, before
his voice, and the chaos of the press scrum, recede into muffled white noise.

This time, though, she eludes his grip, darting into the
building’s bowels after Jason’s silhouette. Their separation, marital and
political, is now complete: As Eli confesses to Peter, he’s already begun to attract
donors for her own campaign for higher office, and the impending divorce will
inoculate her against the disgraced ex-governor’s unsavory reputation. She’ll
run, as it were, as an independent.

In this context, “The Good Wife” presents a dilemma
to Emmy prognosticators. Though the arc that sets up the series’ memorable
farewell is among its weakest —after two ghastly subplots involving Kalinda
Sharma (Archie Panjabi), one featuring her abusive husband and the other
scuttling her altogether — it also highlights the characters and subject matter
that have garnered the most attention from the TV Academy in the past.

It was, after all, the first two seasons of “The Good
Wife,” in which Alicia’s role as Peter’s suffering companion loomed
largest, that earned the series its two nominations for Outstanding Drama
Series. Margulies and Baranski’s performances have garnered a combined ten
nominations, in Best Actress and Best Supporting Actress, respectively.

If Alicia and Diane’s climactic contretemps seem poised to
secure “The Good Wife” at least another pair of nominations — with
Cumming, nominated three times already, a strong contender for a fourth — it’s
distinctly less likely that the Kings’ determination to come full circle will
return the series itself to the Outstanding Drama field. On the whole, the
final season was too clumsy, too contorted, to demand another shot at the
title, and with six of last year’s seven nominees once again eligible,
“The Good Wife” already faces long odds; the smart money is on six
repeats, with newcomer “Mr. Robot” replacing “Mad Men.”

READ MORE: ‘The Good Wife’ Debate: Should Emmy Voters Consider the Number of Episodes in a Season Along with its Quality?

The end of “End” nonetheless offers a razor-sharp
reminder that “The Good Wife,” in its glory days, succeeded in adding
Alicia Florrick — the female protagonist of a network procedural — to the ranks
of cable TV’s “difficult men.” The thwack of Diane’s hand across
Alicia’s face, recalling the slap the latter landed on Peter in
“Pilot,” may position Diane as the humiliated spouse, but it also points
to the fact that Alicia is — and perhaps always was — a figure as canny and
ambitious as her soon-to-be-ex-husband. She’s simply turned her attention from
the stray thread on his sleeve to the cut of her own. As “The Good
Wife” made clear, the law is the lever of power, an amoral arbiter, and in
its language Alicia’s become fluent.

“Does it ever get easier?” a client in crisis asks
her in “Pilot.” “No,” she replies, as if to foreshadow her
evolution over the course of the next seven seasons. “But you do get
better at it.”

Stay on top of the latest TV news! Sign up for our TV email newsletter here. And below, the Kings explain “The Good Wife” finale in their own words.

This Article is related to: Awards and tagged Emmys, Robert and Michelle King, The Good Wife