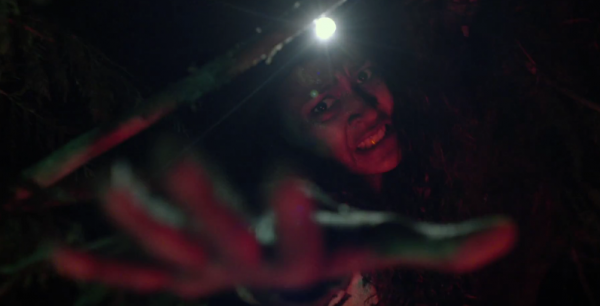 Adam Wingard is among the more exciting horror filmmakers of his generation, with “You’re Next” and especially “The Guest” demonstrating an intuitive grasp of what makes audiences tick. He’ll next try his hand at found footage with “The Woods,” whose first trailer just premiered. Watch it above.

A wispy, a capella rendition of “Every Breath You Take” sung by a woman with a haunting voice accompanies establishing shots of the forest in the trailer’s opening moments. We then zero in on the cast — including Callie Hernandez (“Weightless,” “Alien: Covenant), James Allen McCune (“Snitch) and Brandon Scott (“Wreck-It Ralph”) — who happily set up camp in shots that can’t help but be reminiscent of “The Blair Witch Project.” Things quickly go awry, though there’s almost no diegetic sound — just that Police cover, which goes from serene to unsettling in less than a minute.

READ MORE: ‘The Guest’ Director Adam Wingard Signs ‘Death Note,’ Star Maika Monroe Joins ‘Independence Day 2’
Notably absent from the trailer are any details related to the plot, which are being closely guarded. We’ll have to see what actually happens in “The Woods” when it opens theatrically on September 16.

This Article is related to: News and tagged Adam Wingard, The Woods