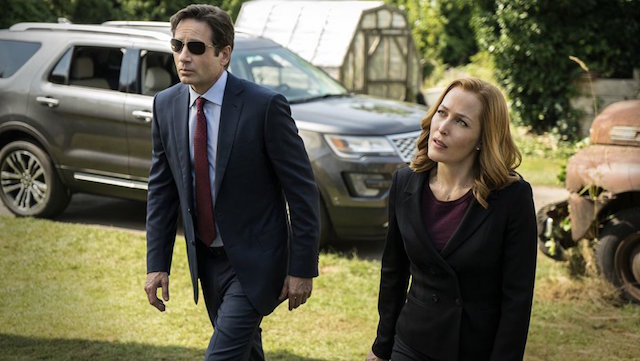 The truth of another “X-Files” installment is out there… and fans aren’t going to like it. The good news: Discussions are ongoing about bringing Mulder and Scully back to resolve this year’s big alien cliffhanger.

The bad news: According to Fox Television Group chairman Dana Walden, such an announcement is still a year away. (Which means the show won’t be back until the 2017-2018 TV season, at the earliest.) “We’ve had conversations with Chris Carter and David [Duchovny] and Gillian [Anderson], and I
believe everyone is on board to do another installment of the show,” Walden said.

READ MORE: The 49 Most Important Characters of ‘The X-Files,’ Ranked

The issue remains Carter’s, Duchovny’s and Anderson’s busy schedules. “Right now as we’ve talked about before it’s a little bit difficult,” Walden said. “The three of them are working in different places around the world. Trying to
coordinate schedules, and hopefully that will come together this season, and at this time next year we’ll have something exciting to share on
‘The X-Files’ front. All parties involved want to do more episodes of ‘The
X-Files.'”

READ MORE: The 12 Most Important Things Chris Carter Told Us About ‘The X-Files’ Revival

Fox aired six episodes of “The X-Files” reboot to huge ratings this year; Season-to-date, “The X-Files” is the fifth highest-rated show of this season, averaging a 4.8 rating among adults 18-49 (when “Live+7” DVR and VOD usage is factored in). According to Fox Television Group chairman Gary Newman, talks are still in early stages, but some details are being discussed.

“We’ve had conversations with all of them that have included discussions of what kind of episodic order makes sense,” he said. “Some of that will be driven by their schedules, how much time they have, but conversations are ongoing. I can tell you that Chris and David and Gillian would all like to do more of these, and certainly the network and studio would love to do more. So we feel encouraged by that. It shouldn’t be anything you anticipate before the 2017-2018 season.”

Stay on top of the latest TV news! Sign up for our TV news email newsletter here. Meanwhile, here’s a video from the recent “The X-Files” reboot.