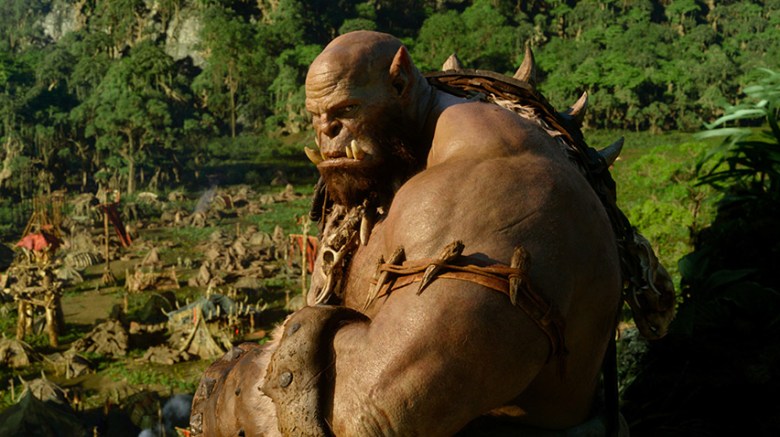 The first few reviews of the Duncan Jones-directed film “Warcraft” are in and it’s not looking too good for the adaptation of the Blizzard Entertainment video game. Starring Dominic Cooper, Ben Foster and Travis Fimmel, the story shows the struggle between the kingdom of Azeroth and the orc warriors who invade their land in order to save their way of life. After a portal opens that connect the two worlds, one army faces destruction, while the other faces extinction.

It seems as if critics agree that it’s already “game over” for the CGI action-packed film with Variety’s Geoff Berkshire calling the movie an “epic fail” and writing, “With its meticulously detailed realms built out primarily on soundstages and enhanced via CGI during extensive post-production, ‘Warcraft’ aims for fresh and eye-popping and yet ends up shopworn and rather tacky. It fits into a long line of visually audacious Hollywood gambles: In success you wind up with a sleeper that few see coming, like ‘300’ (or, if you strike the bull’s-eye, a phenomenon like ‘Avatar’), but the ones that miss — ‘The Spirit,’ ‘Sky Captain and the World of Tomorrow,’ ‘Sucker Punch’ — tend to tank hard.”

The Wrap’s Alonso Duralde wasn’t a fan either stating: “Imagine ‘Battlefield Earth’ without the verve and you get this sludgy, tedious fantasy adventure, a fun-starved dud that’s not even unintentionally hilarious.”

READ MORE: Fight Or Die In The New Trailer For ‘Warcraft’

“If you haven’t already invested in the self-serious mythology, it can feel borderline camp, if not downright dull — or both, as when an uncredited Glenn Close intones platitudes from on high about darkness and light,” writes The Hollywood Reporter’s Sheri Linden. But she does add that the film is “likely to conquer overseas box offices and make a solid stand stateside.”

Steve Rose from The Guardian states that the biggest problem is that “there’s a lot going on and yet we’re never quite engaged with it […] We barely see Azeroth outside the royal castles and wizards’ towers and epic battlegrounds.” Adding, “The heavy use of CGI, and its occasionally awkward interactions with the live-action elements, only serves to distance us even more. Much processing power has been put in the service of spectacular, bludgeoning combat, but the images are somehow insubstantial, and we rarely feel the heat of the battle.”

Giving it two stars, The Telegraph‘s Helen O’Hara states that if you’re into the “World of Warcraft” universe the film could be for you, “If not, you should avoid it at all costs.” She later writes that it’s, “A far cry from Jones’s elegant debut ‘Moon’ or the time-travel cleverness of ‘Source Code.’ While there are pleasures here for fantasy fans and game players, for everyone else this fantasy is likely to prove so high it’s dizzying.”

This Article is related to: Reviews and tagged Reviews, Warcraft