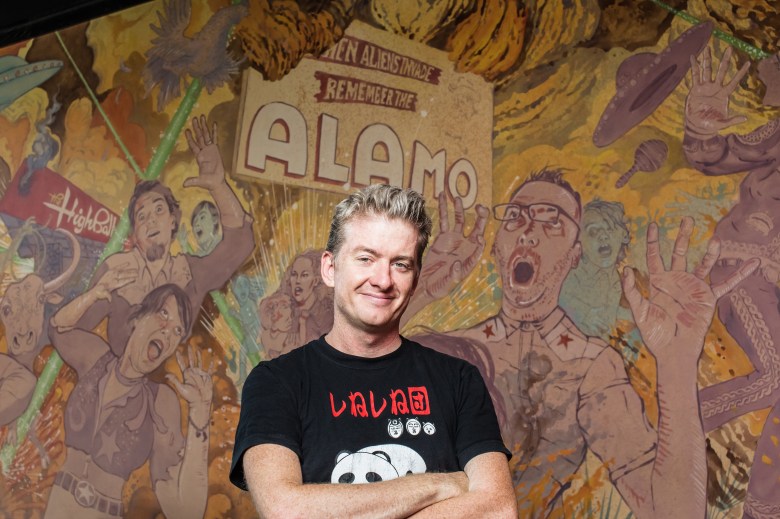 “Don’t be lured too heavily by the siren song of technology. Yes, we should embrace technology in everything we do, from marketing to production, from virtual reality to augmented reality to the next big thing. But chasing technology won’t ensure our survival if it isn’t coupled with a focus on creating and sharing great stories. Technology is window dressing, a tool. The heart of independent film is passionate, personal, compelling stories. Great stories can be delivered via an Oculus headset, a cinema screen or mainlining into our spinal cord a la David Cronenberg’s ‘Existenz.'”

It’s getting a lot cheaper to invest in filmmaking. While companies like Kickstarter and Indiegogo have paved the way for crowdfunding in recent years, other companies are bringing more possibilities to the table.

Alamo Drafthouse founder Tim League announced last week that his company will enter into strategic partnership to help develop and distribute feature films, shorts and virtual reality experiences with the world’s first fan-owned entertainment company, Legion M. Taking advantage of the changes in the law that went into effect on May 16th under the JOBS Act, newcomer Legion M is using what is called equity crowdfunding to allow people to become investors for as little as $100.

In bringing to the table his chain of independent theaters and relationships with top filmmaking talent through Drafthouse distribution (“The Act of Killing”) and Fantastic Fest, League joins Seth Green’s Stoopid Buddy Stoodios (“Robot Chicken”) in giving industry credibility to the new company that will use crowdfunding to raise capital.

READ MORE: Equity Crowdfunding is Here – And It Could Be Terrible For Indie Filmmakers

“We’ve been following this idea about equity crowdfunding for quite a while and have potentially been looking into it for some of our own films on a one off basis,” League told IndieWire in a recent interview. “But the idea of thinking larger with it and building a brand that can curate a slate of projects that people can invest in is a great approach.”

There are people inside the independent film community who are wary of equity crowdfunding, believing that introducing an investment model to crowdfunding could be disastrous for the smaller festival films that have found support on platforms like Kickstarter. But Legion M. is among the first companies to the put concept into action.

Co-founders Jeff Annison and Paul Scanlan praised the patronage model of Kickstarter for giving a much needed boost to indie films,  but they also said they believed that Hollywood’s blockbuster obsession has created a huge hole that their company can help fill.

“Hollywood has gotten so risk adverse that they are really just retreading existing franchises,” Scanlan told IndieWire. The result according Scanlan is “there is this middle space that Hollywood is ignoring.”

Having launched at Silicon Valley Comic Con in March, Legion M is focusing on genre and animated content. According the Scanlan and Annison the success of their model is largely predicated on being able to tap into the passion of the type of genre fan you find at Comic Con or League’s Fantastic Fest. The co-founders are clear that they are not handing over ultimate decision making to their fan-investors — referencing the cliche “you can’t make a film by committee” — but they will be turning to their new partners to crowdsource what books, comics, and artists they should be looking to during development and to make them part of decision making process of what projects ultimately get pushed forward.

For League, it’s the potential of this level of fan engagement that has him excited.

“It’s tied to the name ‘legion’ — if you are part of the team that brought something the theaters and you have an interest in getting a return on investment — imagine the power of those fans getting the word out over social media,” said League. “You look at the excitement crowdfunding has generated for projects to projects like ‘Rooster Teeth’ and ‘Veronica Mars,’ but those people aren’t getting much for their efforts except a tee-shirt or a DVD. Imagine if they were investors.”

The stated goal is for “The “Legion” to reach 1 million investors — which, according to Scanlan, will take at a minimum three to four years, and happen over a series of capital raises. It’s a lofty goal, but the power of being able to mobilize a base of investor-fans even a fraction that size could make Legion M’s projects more attractive to Hollywood studios.

“One of the reasons we feel so strongly about a fan-owned studio, is it allows us to attach a fan base to something on day one,” explained Annison. “Before the projects get started in development we’ve reduced some of the down side by bringing a built in audience to the table.”

League thinks that any creator or property that has a built in audience has the potential to thrive using Legion M’s model. Scanlan and Annison hope content creators with close contact with their fans can see the potential of Legion M.  He pointed to Seth Green signing up his Stoopid Buddy Stoodios. “‘Robot Chicken” doesn’t need to crowdfund to finance their projects,” he said. “It’s the excitement of mobilizing their fan base that makes this an exciting prospect for them.”