Anthony Mackie, Melissa Leo and Bradley Whitford explain how the set of the HBO drama was a place where, no matter what, the best idea won. 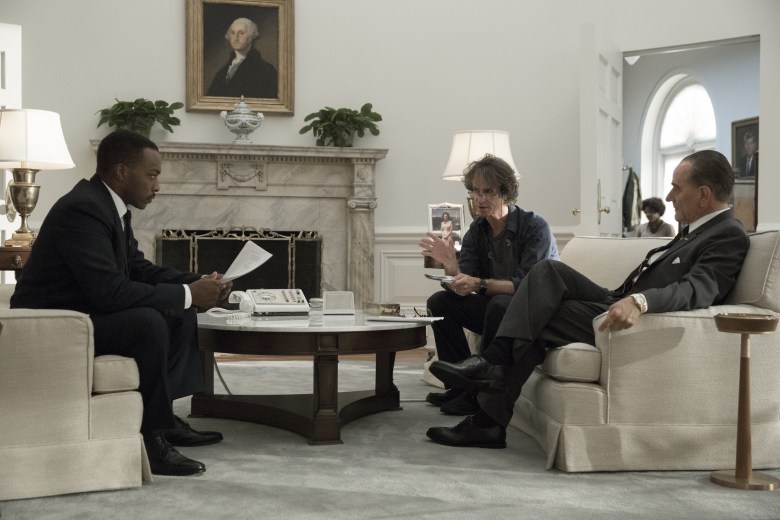 Anthony Mackie, Jay Roach and Bryan Cranston on the set of “All the Way.”

HBO’s gripping docudrama “All the Way” chronicled the ruthlessness of American politics, as captured within a tumultuous eight months during the term of President Lyndon B. Johnson. But behind the scenes, under Roach’s administration, the production couldn’t have been more idyllic.

In the movie, Johnson fights hard to bring more equality to America. On set, Roach, who directed the film, was effortless in creating a more perfect union.

“Jay is like this with everybody,” Bradley Whitford, who played Hubert Humphrey, told IndieWire. “He doesn’t treat the craft services guy any differently than he treats me. One of my pet peeves about Hollywood is that it’s full of lefty, ‘fancy yourself a humanist’ liberals like me and then you get on a movie set and it’s like a 15th century serfdom. People are treating other people like shit because they’re higher on the call sheet or something stupid. This was not that kind of set.”

“All the Way” was one of the summer’s most anticipated events, bringing to the screen Robert Schenkkan’s Tony-winning play with Bryan Cranston reprising his role as Johnson. Cranston’s magnetic performance anchors the movie, but is supported by an incredible array of additional performers, including Whitford, Anthony Mackie as Martin Luther King and Melissa Leo as Lady Bird Johnson.

“This was about as joyous and as wonderful a set as you can be on,” Whitford told IndieWire. His fellow cast members agreed that the collaboration made possible by writer Robert Schenkkan and Roach was something extraordinary. Below, they remember how the project evolved as a result of that atmosphere, and what it meant to them to take on the project.

Starting with the Script Jay Roach on the set of “All the Way.”

Jay Roach: [Schenkkan] wrote this great screenplay, and I knew I’d be collaborating with him. He already had the screenplay and I got to read it soon after and a lot of it was already there. I felt if I could … I knew Bryan was going to be thinking, “I’ve done this over and over and over. I know exactly how to do it for the stage, how do I adjust it?” I wanted to know and memorize kind of where he was starting from before I asked him to go a little bit of a different direction.

Robert Schenkkan: I have plenty of ego, but all I really care about is telling the story in the best possible way and so far as I’m concerned the best idea in the room wins. I’ll probably claim it as my own later [laughs], but I don’t really care whose idea it is. I just want it to work. Fortunately, that’s how Bryan and Jay work as well.

Anthony Mackie: I feel like the movie that you see is a hodgepodge of all of our ideas. When I read the script, I was really captivated by the Dr. King that Robert was able to find, when opening up the script more from the play. And I had a few ideas, a few opinions — and as an actor, if you’re not the lead of the movie or a superstar, usually when you come in with ideas, they just shut you down and they move on. But this was one of the only times in my career where I gave ideas and not only did they listen, but they implemented them into the script. Bryan Cranston and Melissa Leo in “All the Way.”

Melissa Leo: Jay had this way of working where he would invite the input. And then having invited it, use it to the best advantage of this film.

Bradley Whitford: Directing to me is like parenting. You don’t want to overstructure. You don’t want to overly control because your kids deserve to surprise you and startle your expectations. And the most secure directors understand that. Jay certainly worked this way with obviously Bryan, but it certainly extended to me as well. An insecure director will put themselves in the position where the actor is looking to them for direction as if the director knows how this character, how this scene should be played. An astute director like Jay knows that to serve his own selfish interests, the best thing he can give his actors is a sense of real ownership. And that’s the attitude. That’s how you get performances like Bryan’s in this. He’s not waiting for direction. He’s running.

READ MORE: ‘All The Way’: Bryan Cranston Reveals the Tiny But Important Change From Stage to Screen

Mackie: Usually a director will try to hire you because the studio says, “That’s who you need to get the movie made.” Right? This was the first time where I worked with the director and I was telling him, “I don’t want to do this. I don’t know if I can do this,” and the director was telling me, “I know you can do it, and here’s why.” He pointed out different aspects of my work and everything that I had done, and what he thought about my ability that would fit perfect in this role. And once I told him, “Fine, I’ll do it, but this is the way I’ll have to do it,” and he just bought into it 100 percent. It’s humbling when you’re in a position where the director wants you — not because of the ability to get the movie made, but because they think you’re a really good actor.

Whitford: It’s the kind of set where you can get your best stuff because it’s relaxed. There’s a joy underneath it and there’s no fear of collaboration, which is…best idea wins, the hierarchy melts away.

What The Collaboration Made Possible Anthony Mackie in “All the Way.”

Whitford: The whole process of it was so collaborative. It’s not a situation where Jay comes in and goes, “Okay, we’re doing this today. We’re blocking this.” It’s always, “This is what I’m thinking. Where are you guys coming from?” If there’s any process, it’s just trying to listen to the whispers in your head about what might be wrong or what might be right or what might be a place you want to go. There wasn’t a moment where there was something set up that I radically changed, but I felt like I was part of the process all the way through.

Leo: I’ll never forget — rehearsing what we call blocking, it’s half a rehearsal, anybody who is on the set of a blocking rehearsal thinks, “Oh my god, this is going to be terrible.” Because we’re just kind of moving toward it in a blocking rehearsal. And I came walking in from the door into the Oval Office that Jay deemed the best door for me to come in, in a scene very early on in the picture — I think it’s [Lady Bird’s] first time in the Oval Office as the First Lady. And as I, the actress, as Lady Bird, walked in, I ran my finger along the back of the couch that was there. Now, when an actor is alone in faith, it says one thing. And when an actor has been supported by a table or chair or wall, it says another thing. You follow? So it matters, with me and Lady Bird in this funny entrance into this most officious room, that I had something to ground me. The back of the couch. And Jay Roach fucking noticed it in the blocking rehearsal and used it in his shooting. Because he’s brilliant. What that’s saying to me is that my director is watching me, I am safe, and I can trust him, and if I give him what he needs, he’ll use it.

Mackie: There’s a scene where Dr. King is standing on a truck, giving his speech to the crowd. And the one thing that I wanted to do that I talked to Jay about was — I didn’t want Dr. King to be passive, I didn’t want him to be reactionary. I wanted him to be an initiator. And Jay and Robert were really into was actors giving ideas, because we’re the ones creating the characters. So when you see that scene where Dr. King is on a truck and he’s speaking to the crowd, it’s not so much that he’s speaking for LBJ, but he’s definitely speaking against Goldwater. It’s little things like that, that they implemented, that I feel really broadened the idea of who Dr. King was at that time.

Leo: If I haven’t gotten to work with Jay Roach again in five years, I’ll be really sad.

“All the Way” is streaming now on HBO Go and HBO Now.