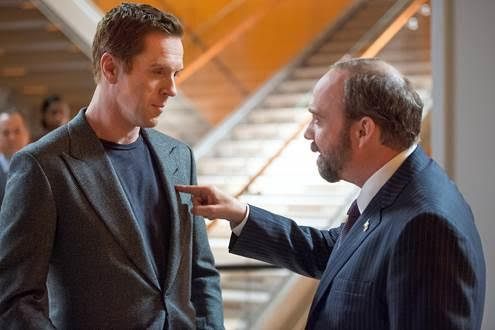 “Axe is not ‘Wolf of Wall Street,’ he’s  more of a blue collar Yonkers guy and because of that he likes to be aggressively casual,” said costume designer Eric Daman. “He doesn’t get into the ’80s and ’90s iconography of what billionaires were supposed to be like. He’s made his own mark wearing T-shirts and jeans. And then when he does put on a suit, it’s like a punch to the face. Everything is calculated.”

But there’s a luxury to his casual look. They nip and tuck the T-shirts so they fit Axe in an elevated way. The tailor trimmed a quarter inch and re-draped or stretched out the neckline.

One of the highlights occurs when Axe enters a meeting to buy the naming rights to a building wearing a Metallica shirt, conveying clothing as a weapon by contrasting blue collar vs. old world money. “The Metallica T-shirt was bought as fan gear but the team worked on it for several hours treating it and dressing it down so it looked like it was purchased at a concert,” added Daman.

To meet his nemesis Chuck, though, Axe wears an $8,000 Cifonelli. “It has a chalk stripe with a pin stripe with extra shoulder pad and a beautiful lapel. It has old world weight in a very new silhouette,” said Daman.

The costume designer wanted to give Chuck a strong silhouette as well, putting him in three-piece suits with padding on his shoulders. “It makes him look tight like a bull. Paul said whenever he put on one of the suits it made him feel powerful and angry,” Daman recalled. “We also wanted him to wear suspenders throughout the series because there’s a bondage part of his relationship with his wife, Wendy [Maggie Siff]. It somehow felt like he’s strapped in and tied up,” said Daman. Axe’s wife, Lara (Malin Akerman), also has a working class background. She’s not a gregarious dresser, either. “She’s like an off-duty, supermodel mom,” Daman said. “She’s with the kids but she’s also running this restaurant. We wanted her to be professional and sophisticated. In her past, she probably liked rock’n’roll music, so we did a lot of slim but boot-cut, bell bottom jeans with motorcycle jackets and softer bohemian blouses. Everything was in creamy pastels. Her wardrobe helps her to balance out the softness.

“But she can be cold-blooded when she needs to be,” Daman concluded. “I think it’s hardest for her to find her place in that world.”

This Article is related to: Awards and tagged Below The Line, Billions, Costume Design, Emmys