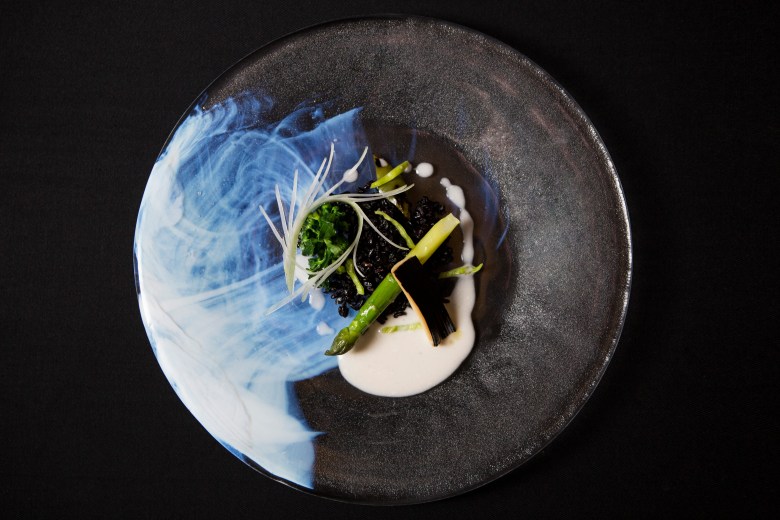 Chef’s Table Season 2, with food by Chef Alex Atala from D.O.M. in Brazil.

This April, I made a huge mistake — three of the directors behind Netflix’s “Chef’s Table” invited me to meet them at the highly-rated NoMad Bar in New York City. And I didn’t order any food.

But while Andrew Fried, Brian McGinn and David Gelb (who also created the series, following the success of his 2011 documentary “Jiro Dreams of Sushi”) enjoyed some world-class tortellini, I did get some delicious details on the new season, including a few key details about exactly why “Chef’s Table” is like no other show on television.

That’s saying something, given how many unscripted TV series focus on the culinary world. But there’s something special about “Chef’s Table.” Said Fried: “If there’s anything that’s truly unique and new about what we’re doing, it’s the way we approach making it and crafting it in a different way.” And here are a few of the secrets to it. “Chef’s Table” viewers immediately notice that the show’s level of execution keeps it at least one notch above your typical Food Network fare. There’s a quality to the aesthetic that elevates it, and give credit to one very specific trick.

A typical documentary series, the directors explained, will use a zoom lens while filming — something that “Chef’s Table” does not do. That might not sound like a big deal, but for those in the documentary space, it’s a bit mindblowing.

“We’re so lucky to have Will [Basanta] and Adam [Bricker],” Fried said.

“Yeah. We have two incredible cinematographers who do the entire series, essentially, with like a small exception, and they are tremendous cinematographers. They’re the ones that can be completely uncompromising,” Gelb added.

Fried said the show’s no-zoom-lens policy confounds other producers. “When I sit with people, they’re like, ‘We want to make the next Chef’s Table,’ and we say, ‘We don’t bring a zoom lens on set with us when we make that show.’ It just makes people’s eyes reel, not really understanding how we do it,” Fried said.

Filming without using a zoom lens complicates the documentary process dramatically, Gelb explained: “Traditionally in documentary and in television, a zoom lens saves you a lot of time, because, with one lens on the camera, you can have a variety of different shots. The compromise is that the optics are not quite as beautiful. With the prime lens, what you’re choosing is a specific focal length. A 35 millimeter lens and do a closeup, and you can also do far away and have a wider shot. The lens is specifically engineered to give you the best of that length.”

“If we were trying to shoot this conversation and we wanted to go from a tight single shot of you to a wide of the room, you can do that on a zoom lens, just by going like this–” McGinn  mimed adjusting a zoom lens. “For us, that is stopping down and swapping a new lens in,” McGinn said.

“Yeah,” Gelb said. “We take extra time that other shows may not to optimize our camera. If you want to change the lens, that’s a moment. That’s a choice that you have to make.” “Chef’s Table” Season 2, with food by Chef Enrique Olvera from Pujol in Mexico.

The food prepared by the chefs of “Chef’s Table” is aesthetically stunning, as seen in each episode. But these moments of beauty aren’t faked by the sort of food stylist that makes a McDonalds hamburger look like human food on television. “A lot of people ask, ‘How do you shoot the food?’ Like, ‘Who’s your food stylist?’ Well, our food stylists are the best chefs in the world,” McGinn said.

“They know what they want their food to look like. They’re pretty specific about it,” Gelb added. “We’re not magicians. Like I mean, a pizza will look like a pizza. Essentially, it’s about the emotional context, the story behind that pizza. Andrew’s working on an episode about Nancy Silverton — it’s bread, but it is a very special bread that has a lot of personal meaning to her. And so that’s a big part of it also. The food looks amazing. We just light it and shoot it in a way that brings out what’s already there and what the chefs are doing.”

Added McGinn: “I also think it’s about us, with our DPs, and figuring how to shoot that particular food. You will notice, we do not shoot all of the food in the same way. It’s sort of like, ‘How does this food want to be shot?’ Then the other thing is that we’re always trying to outdo each other, I think in a very helpful way. We have like a photo stream set up, where I’ll be on the set and get a picture of how Gelb just shot the food and my DP and I get really frustrated and are like, “We’ve got to reinvent what we’re doing tomorrow!'”

Asked whether one style of cuisine was easier to shoot than others, the directors didn’t have an easy answer. “It’s really more about the chefs who think how they choose to visually lay out their dishes,” Gelb said. “There’s no one genre of food that’s more beautiful than any other.”

It’s Not Just the Lenses that Create the Focus In the end, what really makes “Chef’s Table” distinctive is how they approach each individual story. “I think it’s a question of focus,” McGinn said. “We’re really interested in narrative. It’s not necessarily based around events — it’s around people’s personal stories and personal journeys, and so there are arcs and evolutions that come of that, that I think are different than a traditional reality food program.”

“It’s set in the world of food but about people,” Gelb added. “We’re not really concerned with telling the audience how they cook. It’s really more about why.”

“You have to look for a character who is not just a TV character, but someone that you could make a whole movie about. I think each and every character you could actually make a 90-minute feature. That’s important,” Fried said.

The differences matter just as much as the similarities. “We’re trying to figure out the best way to show a bao, because one of the restaurants serves bao right now,” McGinn said. “It’s like, ‘That is not going to look like a dish called Walk in the Forest, that Dominique Crenn creates.’ It’s just they’re creating different things and we’re trying to capture it.”

“From a methodology standpoint, it’s fundamentally different from the foundation to the top of the building, the way we approach how we capture the footage, how we try to tell the stories, how we are crafting. We view each of these as a film,” Fried said. “That film is part of a series and they all, we hope, feel like they are connected in some way and cut from the same cloth. But each story is its own film and that’s how we approach it. That’s certainly, I would think, quite different than a show on the Food Network.”

This Article is related to: Television and tagged Chef's Table, David Gelb, Netflix