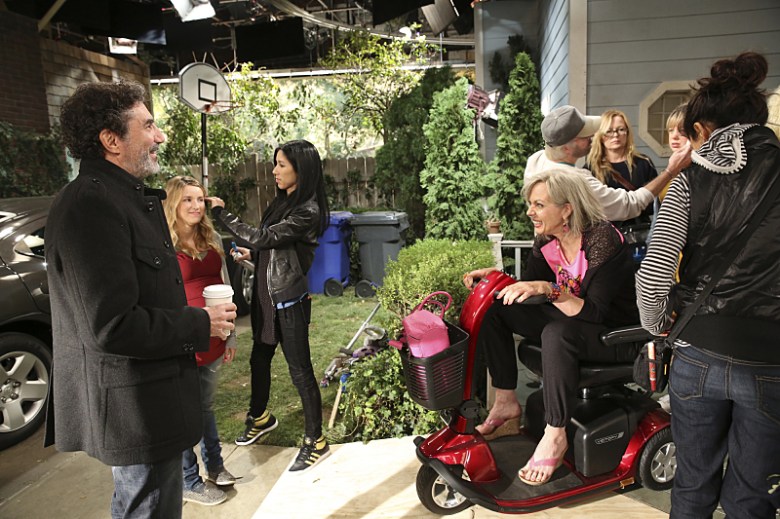 Comedy mastermind Chuck Lorre was an auteur all along. It just took “Mom” to make you realize it.

The CBS comedy, starring Allison Janney and Anna Faris as a mother and daughter both in recovery, is by far the most personal of Lorre’s career. The creator behind shows such as “Grace Under Fire,” “Dharma & Greg,” “Two and a Half Men” and “The Big Bang Theory” has been open about his own path to sobriety, a topic that is central to “Mom.”

“Broken people trying to repair their lives, I can relate to that,” Lorre recently told IndieWire. “I know a lot of people that can relate to the comedy in the repair business of a person’s life. I think we’re all in the process of doing a little mending.”

Lorre is still best known for “Two and a Half Men” and “The Big Bang Theory,” two megahits that made Lorre one of the most successful sitcom producers in history. “Big Bang” remains a juggernaut both for CBS and TBS, which has the show’s off-network cable rights.

But despite his commercial success, Lorre has never won an Emmy: “Two and a Half Men” was nominated three times in the Outstanding Comedy category, while “The Big Bang Theory” has landed there four times. None of those nods turned into a win.

Perhaps that’s because, in recent years, multi-camera sitcom producers haven’t garnered as much respect in the medium as their single-camera counterparts. Lorre has been one of the few successful producers championing the form over the past decade. “Now having been in it, I just see how incredibly difficult it is,” Faris said. “It takes incredibly talented people to put together this kind of show.” Of Lorre’s comedies, “Mom” seems most poised for an awards breakthrough. The show has given Lorre (who created the show with Eddie Gorodetsky and Gemma Baker) some of the best reviews of his career. “Mom” has managed to balance humor while tackling some pretty heavy subjects, including teen pregnancy, domestic violence, overdose and homelessness, in addition to addiction.

“This is not the first half-hour comedy that looks at a serious subject, but that’s what’s different for Chuck, and I think he’s proud of that,” Janney said. “It feels like a very grown-up show for him. I had no idea that we were going to be going the places that we’ve gotten to go with ‘Mom’. . . ‘Mom’ is risky, and it’s a multi-cam comedy that deals with the little tragedies that we have to face all the time on this planet. “

Lorre said his previous success with loud, bawdry comedy like “Men” (where yes, dick jokes were welcome) gave him the permission to explore darker themes: “I needed to do something that was challenging, and forced me to step into areas that normally I would have never gone near in terms of comedy,” he said. “I felt emotionally attached to the material. I am at a point in my career where I can take some chances. And this seemed like a really reasonable arena. If you’re going to experiment, do something that is meaningful to you. If you fail, you did something meaningful to you. It wasn’t an attempt to make money. It was an attempt to tell a story that I thought would be great to tell, and it would be really exciting if we could make it funny too.”

After “The West Wing,” Janney attempted to work with Lorre on another comedy project loosely based on her life as a single woman who has been engaged several times but never married. The show didn’t materialize, but she finally got her chance to work with Lorre when “Mom” came along.

“He would definitely be one of the top five auteurs in the country, for what he does and what he manages to do,” Janney said. “I’ve never met someone that was so completely devoted and hands-on with something, and on every level, on every department. He has a very specific vision, and he has that incredible confidence too — experience to back it up with every decision he makes.”

Lorre bristles at the moniker: “I don’t think ‘auteur’ is the right word,” he said. “It’s a collaborative medium. People who try and do it all by themselves, they burn out. It’s too much, 22 or 24 episodes. You need desperately to collaborate with really talented people. And have faith and trust in a collaborative process to get you to a show you’re proud of. As opposed to the maniacally ego-driven ‘this is my vision.’ I think that sounds good but it’s doomed to fail.” But these shows, ultimately, are Lorre’s vision. Janney and Faris tell countless stories of Lorre’s tweaks, both large and small: “One time, they were shooting a scene in the evening and the porch light, back at the old apartment, wasn’t on,” Faris recalled. “It was something that I don’t think anybody would have noticed, but he was like, ‘No, no, no, that porch light, it’s evening, it has to be on.’ Those kinds of moments happen all the time. Or the time Christy, my character, was incredibly nervous about asking for a raise. We had a long talk about how it’s specifically difficult for a lot of women to approach the boss, to feel of worth. He’s looking at all of these things.”

Lorre also expects a lot from his writers and cast. “It’s, on one hand, incredibly challenging to be a part of, because it’s emotionally and physically and mentally, it demands so much of us,” Faris said of “Mom.” “At the same time, that’s also what makes it incredibly rewarding. I feel like I’m a part of a show that really touches people.”

Faris is also impressed with how Lorre navigates the network system while still staying true to his comedy. “He doesn’t let the rules get him discouraged,” she said. “He likes to rise to the challenge, so if we have a sex joke that the network says, ‘No, that’s pushing it too far,’ I think he gets a kick out of being like, ‘Okay, well how do we push it just far enough,’ and to still make it equally as funny.”

Janney credits Lorre’s background as a musician. (He famously wrote the theme song to “Teenage Mutant Ninja Turtles” and a song for Blondie before turning to writing.) “The fact that Chuck is a musician plays a lot into the music of his writing. He hears it,” she said. “Aaron [Sorkin] does too. They both sit and they will watch, but they’ll also just look down at the script to listen to the rhythm of what they wrote. He just sort of uses all his senses when we’re going through a run through. He’ll manage to give me a note and fix why a moment isn’t working for me, and at the same time, notice the font on prop that’s on the table in the front and say that doesn’t make sense, that shouldn’t be.”

Like many others, Lorre credits TV legend Norman Lear for inspiration, particularly as he infuses comedy with dramatic moments on “Mom.” “I don’t know why television as a medium moved away from it for many years,” Lorre said. “But he showed you that you can put on a television show that’s funny, really funny, and tackle some real issues that affect real people. That was woven into my DNA watching that stuff as I was growing up.”

And just like Lear’s hallmark series (“All in the Family,” “Good Times”), Lorre said it’s about creating familiar characters that then bring the funny. “You have this unspoken contract with the audience,” he said. “If it’s a comedy, laughter will ensue. The characters will be meaningful and you’ll somehow find your way into that story and find empathy for them. The laughter will be legitimate. And if that contract is broken, they won’t come back. Why would they?”

Janney said she believed “Mom” would be the stepping-stone for the next evolution in Lorre’s career. “I feel like this is big,” she said. “‘Mom’ is going to give him a new glint in his eye for something new that’s going to come out of him. Nothing’s off limits. I wouldn’t be surprised if he had a movie next year and a Broadway musical.”