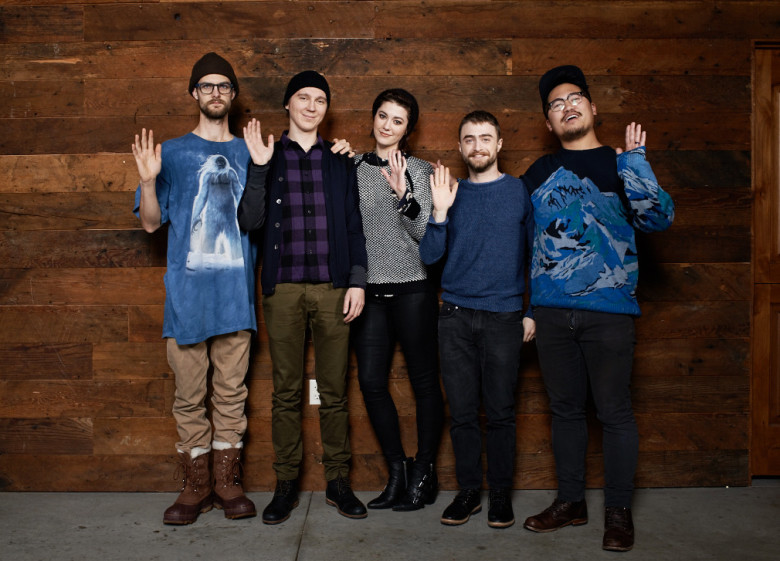 The cast and crew of “Swiss Army Man” at Sundance

“Swiss Army Man” opens in limited release this Friday and nationwide on July 1. You’ve likely heard a lot about the film already, from the walkouts at its first Sundance screening all the way to star Daniel Radcliffe touring NYC with his stunt dummy.

Yet in a month of poorly reviewed sequels, “Swiss Army Man” stands alone as a full, pure, emotional experience. The film’s co-directors, Daniel Kwan and Daniel Scheinert, combine a sense of absurdity and seemingly low-hanging-fruit fart jokes with pathos and soul. They have created a new, magical thing.

This week, IndieWire’s deputy editor and chief critic Eric Kohn sat down with the Daniels, as they liked to be called, at a panel at New York City’s Elinor Bunin Munroe Film Center. Showing the audience clips from the film and their previous music videos, the Daniels talked about the collision of self-awareness and genuine spirit that has permeated much of their short-form work. They also talked casting two major actors, finding a bear to work with on set and being advised by Quentin Tarantino at the Sundance Labs. Read about some of their best experiences below. They initially pitched the film to studios as a joke.

When the duo were going around Hollywood to meet with producers about potential projects, the “Swiss Army Man” concept was intended as a joke…until someone told them to make it.

“Deep down we really wanted to make ‘Swiss Army Man’,” said Daniel Scheinert. “Eventually one producer said, ‘Why don’t you just make it?’ He said, ’That sounds great. You should write it.’ Then we were like, ‘Oh no, now we have to write it.'”

From there, the Daniels started writing and the tone of the entire project came together instantaneously.

“As soon as we started writing it, we never thought, ‘Let’s make a movie that starts with a fart and the whole movie is fart jokes,'” said Scheinert. “There was no real draft that was just that. It was always like, ‘It’s going to end with a fart that’s going to make you cry.’ This is gonna get sincere, we’re gonna play it straight. The content is funny and the execution will be glorious.”

They went to the Sundance Labs in 2014, and their film got torn a new one.

“It’s what film school should be,” he continued. “They take your creative project, and they make you think about it hard and talk about it real hard. There’s no real perspective logic to it besides putting two people in a room. We came out of it with a stronger understanding of what we refused to change [in the script] and what needed a lot of changing.”

One of the advisors at Sundance Labs critiquing their work? Quentin Tarantino.

The original independent giant sat down with the Daniels at the Screenwriters Labs. His advice for them was predictably hilarious.

“Every single day you’re talking to advisors who are just industry professionals,” said Kwan. “One of the people who read our script and talked to us was [Quentin] which was absolutely insane. It was so much fun to talk to him about the movie. I was like, ‘let’s not talk about our movie, so in ‘Kill Bill’…”

“I was so scared,” said Scheinert. “He’s a no filter kind of guy. One idea he had was that we should put the ‘Gilligan’s Island’ theme song somewhere in there. Like, ‘It should be he’s farting and there’s the Gillian theme song floating behind them.'”

“You sit down with these advisors for three hours at a time,” said Kwan. “You’ll do the same thing the next day and it’s exhausting. They’ll contradict each other – one person will be super encouraging, the next dismissive. It’s wonderfully chaotic.”

“He also wanted us to shoot on film and we didn’t,” joked Scheinert.

The video for “Turn Down For What” started as a break from screenwriting, but became integral for the film.

The DJ Snake and Lil Jon music video, which currently sits at over 500 million views on YouTube, was borne out of the Daniels’ impulsion to make something impulsive.

“We had finished draft two of ‘Swiss Army Man,’ and we were exhausted emotionally from academically trying to wrap our heads around a feature film,” said Kwan. “We were trying to get intellectual. And a music video is the opposite of that. You just let the id take over and see what happens.”

“The song kind of inspired us,” said Scheinert. “We were like, ‘Wow, this is really stupid.'”

Directing the music video gave the Daniels the inspiration for how to configure an element of “Swiss Army Man” they struggled with during writing: The ability for the corpse Manny’s boner to function as a compass, pointing in specific directions on cue.

“We upped our boner game for ‘Swiss Army’=,'” said Kwan. “[Turn Down for What] was just a broomstick with a hole in the back of his pants. There were no visual effects. And ‘Swiss Army Man,’ we had an animatronic one built. It could point left and right. This was almost like a test shoot. So ‘Swiss Army Man’ inspired ‘Turn Down for What,’ not the other way around.”

“We certainly didn’t suspect this video would be a calling card or help us get the movie made, but it did,” said Kwan.

Daniel Radcliffe was a dream to work with on set.

The Daniels weren’t expecting to score Harry Potter for their weird indie film. Yet not only did he fit the bill for the part – an amazing actor who could also sing – he was down for the insanity.

“We respected the risks he’d already been taking as an actor, so we thought he might be down,” said Scheinert. “And he can sing – he was in ‘How to Succeed in Business’ on Broadway, so he checked that box. And we don’t like having assholes on set – we want our two lead actors to be fun to hang out with and be cool, and we’d heard nothing but sweet things. Paul was like, ‘I’d love to work with Daniel Radcliffe.’ So we reached out.”

“We Skyped with him and he asked if he could do his own stunts,” said Scheinert. “And we were like, ‘That’s the best question! You’re hired. And yes!'”

Though Radcliffe did not actually set himself on fire, he was willing to put himself in scenes in place of the dummy versions of Manny they created for the shoot.

“We didn’t know the guy,” said Scheinert. “He obviously had every right to not want to lie in the cold dirt for most of the day. But at the end he wanted to. He went, ‘If Paul’s going to be in the scene, I want to be in the scene.'”

“It kind of set the tone for everyone,” said Kwan. “If Harry Potter is going to lie in the dirt for hours, I can’t say shit. Nothing I’m doing is worth complaining about. It was so much fun having there in almost every scene. We only used the dummy with it looked like someone would die.”

Getting the right bear for the film took some challenges.

One unique problem on the “Swiss Army Man” set was the need for a bear in a scene late in the movie. “We didn’t want to do a CG bear, because we couldn’t afford it and it really doesn’t look that good,” said Scheinert. “Even in ‘The Revenant’, which is an amazing movie, the bear looks like a video game almost. We wanted to hire a real bear or something else that felt real.”

“One of our ideas was to shoot a real bear and then comp its face onto an animatronic bear so it could do exactly what we wanted, but you could see the mouth and the eyes,” said Kwan.

“We were like, ‘Come on over, it’ll be fun!’ and he was like ‘a hundred thousand dollars.'” said Scheinert. “We asked if he could cut us a deal and he said, ‘I read the script. Didn’t like the poop stuff. I think I’ll stick with commercials.'”

Ultimately, The Daniels had to settle for the real deal. “Tag the bear did a great job,” said Scheinert. “He didn’t need CG, he’s just real. He’s just a cool little bear.”

There was no genre to fall back on while shooting – they had to pave a new way of creating things.

There was nothing easy about shooting “Swiss Army Man,” from volatile weather to working with children to shooting on boats to shooting underwater to lighting someone on fire.

“Usually you can fall back on a genre or something and go, ‘It’ll be great!'” said Kwan. “With us, we were like, ‘I don’t know man, we’re making something crazy, it might not turn out well.'”

Accomplishing the shoot came from the Daniels’ desire to make a film that wasn’t just fun or funny, but something audiences would find human.

“There’s two halves of ourselves,” said Kwan. “One is rebellious and fuck-you and whatever, the other just wants to make something really sweet. When we work on a thing, the idea can be crazy and then two months from now it’ll be done and we’d just go, well, that was fun. So we’ll try to bring some value to it.”

“One of the reviews we read labeled it as neo-sincerity, like a post-post-modern sincerity,” said Scheinert. “We’re self aware of the fact that every story’s been told been told before, that you see two people fall in love in every single movie .But beyond that we still want to know love and still want to understand beauty.”

“The more sincere you go with something so stupid, the funnier it is,” said Kwan.