The director explains how she helped guide the pop star in his very first acting role. 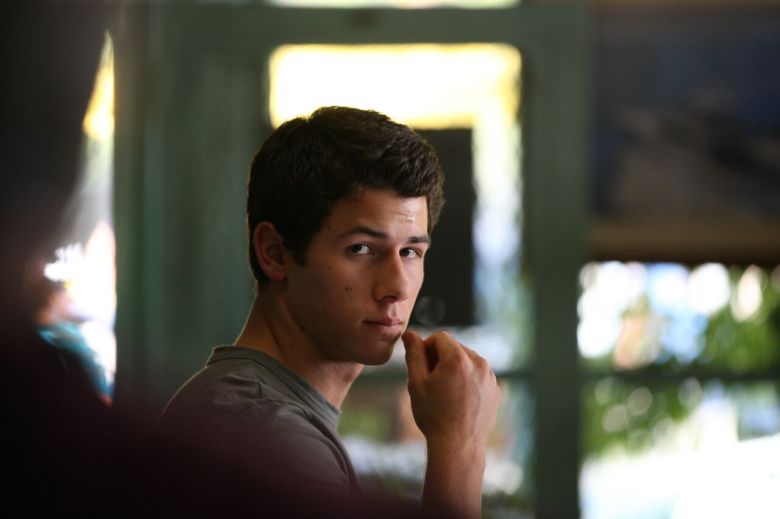 Elizabeth Allen Rosenbaum might seem like a strange choice to direct a steamy thriller like “Careful What You Wish For,” what with a resume filled with teen-friendly picks like “Aquamarine” and “Ramona and Beezus,” but as it turns out, something as decidedly adult as the Nick Jonas-starring feature was the kind of thing she’d been wanting to direct for years. The film features Jonas in his first on-screen role, and it’s a demanding one at that, casting him as a hunky teen who ends up embroiled in a very twisted affair with a local woman (Isabel Lucas). One person not so happy about that affair? Her nefarious husband, played by Dermot Mulroney.

The film required a lot out of Jonas and Lucas, both of whom had to strip down for a series of sex scenes that got so intense that the film, originally imagined as a PG-13 thriller, soon picked up an R rating it couldn’t shake. But Rosenbaum was always determined to create a safe, welcoming environment on set, one that allowed everyone, especially her budding new star, to feel their most comfortable.

IndieWire recently spoke to Rosenbaum about creating just such an environment, the “intelligent” choices that Jonas is making in his career and how she handled her trip through film school in a very unique way.

IndieWire’s Springboard column profiles up-and-comers in the film industry worthy of your attention.

This was an independent, small film and they were looking for a female director. I’ve heard that more and more often, people are more conscious about trying to branch out and get more women behind the camera. And it also seems like this film was more sensitive than your classic femme fatale movie, given it was a younger and more impressionistic kid, and a woman who had to feel more approachable and softer.

What attracted me to the film was that it was a classic femme fatale movie turned on its head a little bit – with an adolescent, with a teen who was being baited. I thought it was interesting, and with the timing of it, with so much more information out there these days, people have to grow up so much quicker than they used to. That’s what spoke to me to it, given my prior work as a “teen” director.

They were trying to give me a PG-13 rating, but they got an R, and they couldn’t reverse that [with an edit] because they didn’t have any money left. They were forced to release it as an R, even though we shot it as a PG-13.

It was both of these actors’ first times doing sex scenes, and those go very slowly because you have to make them feel comfortable. I definitely create that kind of environment when I’m making movies. Isabel was a little more nervous than Nick – even though it was shot a couple years ago and he was still a teen in real life – he was just, “whatever it takes,” and was pretty comfortable. She was more nervous, and I can understand why. There’s an extra element that people have to be so concerned about these days with actresses, that any time their name is Googled they can find a screen grab of anything they’ve done, especially if it’s in some way objectifying them. It’s going to be the first thing associated with their name. And it’s bigger than the actual movie, unfortunately, so you really have to think about that, whereas 10 to 15 years ago, you didn’t really have to.

One weekend, Isabel, the cinematographer and I went up to the location and we just took a lot of pictures where she was, for all intents and purposes, naked. We talked about the scene and what she felt comfortable doing. She looked at the photos and kind of vetted them, so that by the time we had to shoot the scene, it could go a little faster. It helped her get to that comfort level. In a couple shots, my assistant stood in for her in a bikini so Isabel could stand with me and watch, which gave her an extra comfort level.

Nick has really stepped up and taken on all sorts of interesting material. He’s an internal person so he’s had to learn to externalize that a lot. He’s so driven and intelligent and thoughtful and he’d done Broadway musicals and television, but he was 19 and it was his first film, so he took it extremely seriously. By the time I sat down with him for our one and only rehearsal before we started shooting, he had everything highlighted and had all these little Post-Its. I think he was just ready to go there.

Ever since [we made this film], he’s made some even more brave, intelligent choices to kind of buck the initial stigma for what it’s like to be a transitioning Disney star. As you grow out of your audience, what do you do to survive? He’s been really smart about it.

I did a short film that was my critical calling card, back when you could get a studio feature off a short film. I got my first offer off of that short, which was a gross-out wrestling comedy with an all-boy cast. It was aggressive and I was lucky enough to get offered films out of it. I was one of the only 30-year-old female directors out there at the time. That helped me transition into being a feature director.

I didn’t know very much technically when I started film school. After film school, I was an assistant to a producer, so I worked in the business for a while so I could see how people were selecting first-time directors. My boss had helped Alexander Payne get his first movie, so I was privy to that. I went to school and people didn’t know what to make of me because I was older and so driven, and I knew exactly what I needed to do when I was there because I had seen it from the other side. I was very strategic in my education. I would definitely recommend taking a year before school to figure out your own passions and goals, so that we you go to school – and school’s not right for everyone – but when you go you have a plan so you’re not being shoved in one direction.

TV is up and down. Some shows are wonderful and some of them are more like a factory. I thrive with new shows where I get a chance to really be adventurous and figure things out. If you come into some older show and you try to give the actors direction. they’ll just be like, “yeah, I got this,” because they know the show so much better than you do.

I just did a pilot for Amazon, it’s a bunch of a girls on a soccer team and I cast soccer players and unknowns. That was ideal, because I casted behind the camera and that was a big deal, because it was me as opposed to a guest. People are sort of testing you.

“Careful What You Wish For” will be in theaters and on demand, including iTunes, on Friday, June 10.

This Article is related to: Interviews and tagged Indiewire Springboard, Nick Jonas