David Schwimmer and Jim Sturgess give it their all, but "Feed the Beast" feels like it's made for a different time. 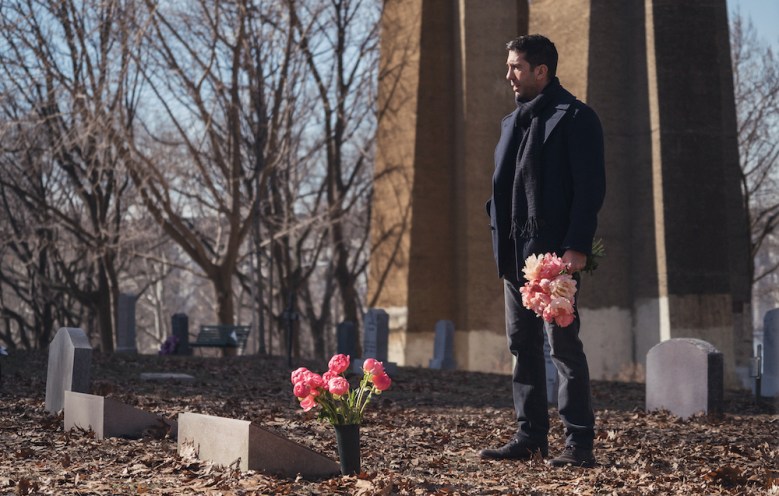 During a scene from the third episode of “Feed the Beast,” Dion (Jim Sturgess), an ex-con with a love for cooking matched only by his penchant for snorting powder, says to his sommelier best friend Tommy (David Schwimmer), “He’ll live, but the important thing is we got our wine.”

If none of that strikes you as odd — particularly the dialogue itself — then perhaps “Feed the Beast” is your particular flavor of ice cream. And I mean that sincerely, because it would have to be, for you to stick around long enough to hear Dion’s sincerely spoken words of wisdom. In an age of “too much TV,” series have to start stronger, hold up longer and leave a better aftertaste than Clyde Phillips’ oddly constructed series on restauranteurs. Even if a few select ingredients may make you want to take another bite, each episode ends up a flavorless hodgepodge of expired scraps.

Okay, okay. Enough with the food puns. Based on the Danish series “Bankerot,” “Feed the Beast” follows two best friends, both in recovery from separate catastrophes. Dion just got out of jail, but remains indebted to a mobster known as The Tooth Fairy (Michael Gladis of “Mad Men” fame, who we’ll come back to in a minute) and enslaved to his cocaine mistress. Tommy lost his wife to a car crash and now has to raise their son on his own — and provide for him. Before, he and Dion planned on running a restaurant together, with Tommy’s wife, Rie (Christine Adams), as their business manager. When she died, everything went off the rails. Christine Adams in “Feed the Beast.”

Until now. Backed into a corner, the two friends come together in an attempt to bring back their dream diner; this time, in the Bronx. Hellbent on healing over fine food and expensive wine, the two friends messily make their endeavor move forward, even as issue after issue stacks up. Remember The Tooth Fairy? Yeah, he’s a problem — both for Dion and the show.

It’s not so much that Gladis isn’t exactly the most imposing figure in the Tri-Borough area, but if you were turned off by my food puns above then you’re going to implode from all the threats made against teeth in the first few hours alone. Why is this man so obsessed with teeth, and why does Phillips think a mobster’s nickname needs to be reestablished in every scene? Moreover, while the act of pulling teeth can be truly gruesome (see “The Americans” or “Marathon Man” for maximum discomfort), constantly talking about it just sounds silly.

There are a few more character traits that prove similarly distracting. John Doman, an intimidating presence no matter the project, is saddled with a wheelchair for yet unknown narrative reasons, but its only use so far has been in service of a joke; a good joke, admittedly, but hardly worth it considering how much drama the whole thing undercuts. Tommy’s son, TJ, is similarly restricted: He was so traumatized by his mother’s death, he’s been mute ever since. Elijah Jacob is pretty impressive as a child actor, but the payoff can’t be worth it for what’s felt stunt-y for four episodes. Lorenza Izzo in “Feed the Beast.”

Most troublesome is Pilar, a lovestruck fool who even I, as a sucker for all things romantic, can’t understand. As Tommy’s pseudo-love interest, she simultaneously comes off as a wide-eyed innocent, obsessive stalker and legitimate crazypants. Without spoiling too much, this widow falls for a widower during a role-playing session during counseling that casts her as Tommy’s dead ex-wife — and then they lean into it! If this was her show, it would be called, “The Replacement Wife.” And for everything Lorenza Izzo does to make her a real person rather than a wackadoo male fantasy, there’s just no escaping the weirdness.

But, and I hate myself a little for admitting this, there are moments, however brief, that make you want to finish this dangerous dish, even when you know you’ll regret it later. The human train wreck that is Pilar is undeniably fascinating, if only because where this show takes her is so unpredictable (even if her short term results are the opposite). The same can be said for the series itself, as “Feed the Beast” could turn into something far better than what it is now. The series feels like it was made for a different era — like the old guy who still shows up at the club, even when everyone knows he needs to move on — and these days, there’s simply no time to stick around and wait for it to realize who and what it is. So if you can’t take the heat, get out of the kitchen.