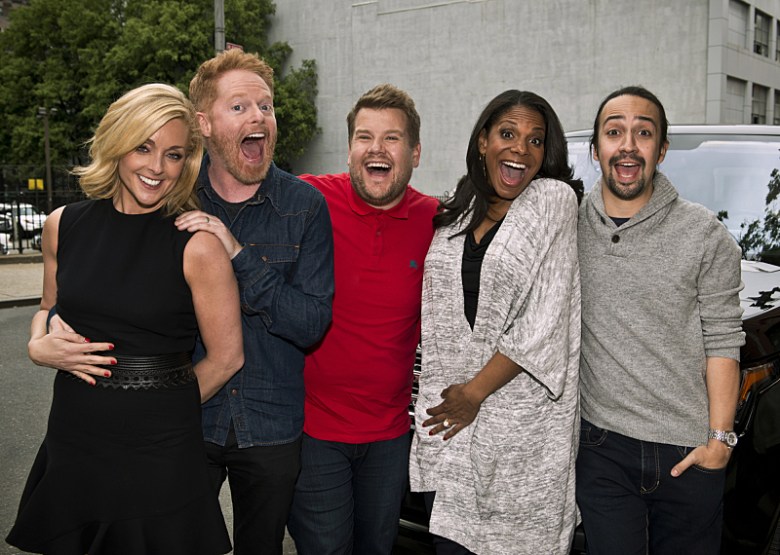 The Tony Awards are coming, James Corden is hosting, and so it shouldn’t be any surprise that some “spontaneous” Carpool Karaoke has erupted this week, this time roaming the streets of New York City — specifically, Broadway.

Even less of a surprise — Corden was able to draw in “Hamilton’s” Lin-Manuel Miranda for the opening portion of the segment. The duo managed to stretch beyond the often-covered opening number from the “Hamilton” soundtrack to have fun with a bit of “Guns and Ships” (Corden, filling in for Daveed Diggs, nearly managing to keep up with Lafayette’s intense rapping). But also, Miranda did confess to Corden that unlike his first Tony-winning triumph with “In the Heights,” he’s a little less nervous this year. Why? Because the show is “selling fine.” (Do they give out Tonys for understatements?)

Afterwards, Corden picks up Audra McDonald, Jesse Tyler Ferguson and Jane Krakowski for some more Broadway sing-a-long fun, including the songs “Seasons of Love” from “Rent” and “One Day More” from “Les Miserables.” They even sing songs that aren’t from Broadway! They all seem very nice and down to earth,  and have plenty of advice for how Corden might make sure the night is a fun one.

The Tony Awards air Sunday, June 12 on CBS. James Corden, as mentioned before, is definitely hosting. Lin-Manuel Miranda, based on all conventional wisdom, is probably winning something.