These lessons from Palm Springs Shortfest could change the way you think about your fundraising campaign altogether. 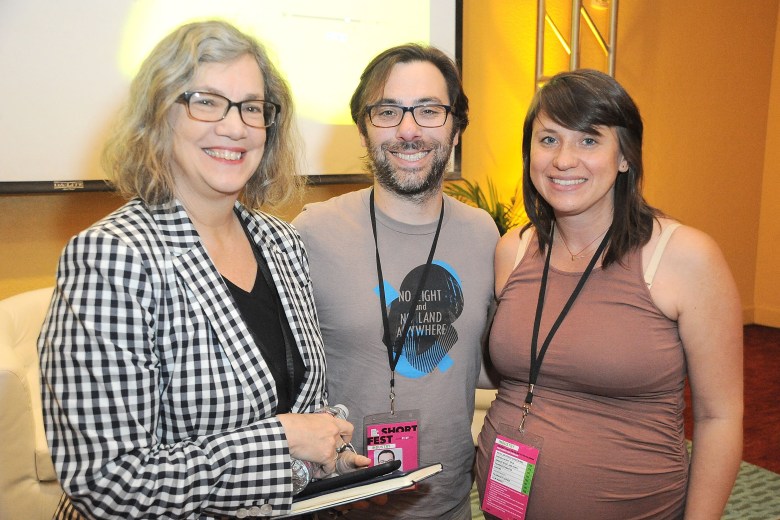 Crowdfunding for independent film has been around for a while. When a campaign to complete Orson Welles’ last film can’t meet half its goal on Indiegogo, clearly even with major names attached, not every old project is able to engage with an audience. Sheer volume is making it tougher for your rodent documentary or alpaca musical to break out of the pack. And enough filmmakers have now tried and failed at crowdfunding that there’s reason to be scared of the whole thing.

Thankfully, the leaders of the biggest crowdfunding sites know this, and are working to help filmmakers get their movies made. There are clear advantages to hanging onto your equity, especially when it comes time to release your movie.

IndieWire editor-at-large Anne Thompson sat down with two veterans of the film and crowdfunding industry at Palm Springs Shortfest this past weekend to cover the changing  marketplace, and how creators can make crowdfunding work for them—Marc Hofstatter, who is in charge of film and digital for the global crowdfunding platform Indiegogo, and Emily Best, who founded the film-based crowdfunding and VOD platform Seed&Spark in 2012.

Here are their tips, warnings, secrets and overwhelming encouragements:

Treat the campaign like production of a film…and give yourself a lot of time for pre-production.

Are you a filmmaker? Producer? Actor? Wherever you’re starting from, Best and Hofstatter encourage crowdfunders to think of the time before the campaign goes live as the time to make every decision in regards to audience, rewards, and cost.

“If you’re running a 30-45 day campaign, that’s not actually much time,” said Best. “Think of your crowdfunding campaign just like a film. You have a preproduction phase which you work on everything. You have a production phase that is only the amount of time you’ve allotted and cannot extend, as you’ve hired these people for a certain amount of days, and your budget depends on it. Your actual campaign is executing on the things you’ve set up.”

Hofstatter’s preferred analogy was more akin to a three-act structure of a film’s narrative.

“You have to be careful that the first few days are going to be really exciting, just like a first act,” he said. “Everything you’ve been building up for weeks is finally coming. Everyone’s there and everyone’s excited…everyone knows who the characters are and what the plot will be. And by the time you get to the end of that first-act cycle – about a week – it’s going to really slow down. You’re sort of stuck in that second act of a film.”

“There’s a huge dip in every crowdfunding campaign in the middle, and more often then not you’re unable to avoid that to some degree,” said Hofstatter. “It’s using the time before the campaign – use a production calendar, if you will, to plot out what’s going to happen on day 13, 17, 22… so that after that first act, you build up, you finish funding, and then you overfund in those last few days.”

A career in independent filmmaking is a business. If you intend for even a short film to be profitable for your career, you need to hire some people to help you.

“With any campaign, if you’re doing a crowdfunding campaign by yourself, you’re going to raise 180% less than if you had a team,” said Hofstatter. “You wouldn’t run a production by yourself. You wouldn’t build a house by yourself, or it would take a really long time. The era of the shy auteur is passing away. We’re in a digital era. If you are that person who is a little more shy, a little more reserved, you should try to get over it a little bit, and at the very least have a team around you that can help you push through and understand why your project and why your talent matters.” “The Motivation 2.0,” an Indiegogo Project

Hofstatter discussed how one skateboarding doc on Indiegogo, “The Motivation 2.0,” shifted its audience entirely after the skater community didn’t show up.

“Whether or not they were too young, they just didn’t like paying for stuff. So they didn’t contribute to the campaign,” said Hofstatter. “After the first week they had to pivot very heavily toward the extreme sports and filmmaking community. They eventually hit their goal, but they didn’t prepare themselves enough for their launch.”

He also encouraged filmmakers to consider every possible category they could pitch their film to.

“Knowing where your community lives in incredibly important, but so is knowing how many communities you’re trying to reach with your film,” said Hofstatter. “How to break your film down into different categories. Is it a political film? Is it religious? If it’s Jewish, you go to Jewish sites. There was a film on Indiegogo called ‘As I Am: The Life and Times of DJ AM’ that premiered at Tribeca last year, and it was about DJ AM who was a celebrity in electronic music, but he also had PTSD from an airplane crash he was in and was also an addict. When you break all that down, when one of those support groups doesn’t show up on day one, you have backup.” “As I Am: The Life and Time$ of DJ AM,” an Indiegogo Project

If you’re a filmmaker, make a pledge film, make it good and make it short.

Warning: If your current pitch video is you sitting in front of a camera for seven minutes, you ought to reconsider that choice.

“I don’t know what the hell happens to filmmakers when they need to make a pitch video,” said Best. “Excellent filmmakers! And then they have to make a video and they’re like [monotone voice] ‘Hi, my name is Emily, I’m making a movie called ‘Palm Springs’ and we’re really boring so if you could give us some money, that’d be great’… it’s bizarre what happens.”

She and Hofstatter discussed Spike Lee’s own Kickstarter campaign from 2013. Spike’s first video for the campaign was a largely unedited take of him slowly describing his project. His team wisely pivoted towards something more exciting.

“Even Spike Lee hustled and used all of his marketing apparatus, but the first version of his video was not good,” said Best. “It was… ‘I’m Spike.’” And then he realized what he had to offer people so that people would be involved well in advance of actually making something… it’s different. It’s different than what you offer investors. It’s different than what you offer people who are coming to see a movie that is already made.”

“You can do this with basically no resources,” said Best. “How do I know? Because you’re an independent f**king filmmaker and you should know how to do that. Sean Baker made ‘Tangerine’ on a couple of iPhones, you can make a decent pitch video for no money. We’ve all had to do it at some point. Between us we can send you thousands of examples of exceptional Kickstarter videos that are made for really cheap that do one thing really importantly: they activate the audience for the film. It’s different than your Aunt Bertha who’s going to give you money for your project no matter what. There’s a big difference.”

READ MORE: Is There A Market For Shorts That Debut at Film Festivals A still from Spike Lee’s Kickstarter

Best and Hofstatter addressed the three essential questions of crowdfunding: Who’s your audience, where are they and how do you get their emails?

“Social media footprint is super important…you can’t launch a crowdfunding campaign with three Facebook likes and five Facebook followers,” said Best. “The actual convergence of social media is one percent. That means one percent of people who see your call to action on social media will actually support you. Email, on the other hand, can be more like 20-30% convergence if you use it effectively and correctly. What you do is establish a relationship with an audience early, go into chatrooms and having a relationship with people. Creating a call to action that gets them to join your email list. By the time you launch your campaign, you want to have a one-step connection that’s a click away.”

Best discussed how emails can prove valuable at any point in an independent filmmaker’s career, even after they’ve screened their crowdfunded film.

“While on the festival circuit, you should have a pad of paper and every single screening you have where people are delighted by your film,” said Best. “You have this pad of paper and you make sure to collect the email addresses of every single excited audience member who wouldn’t have otherwise gone to the screening if not for your incredible short film. And that short film gathers you two, five, 1,000 new email addresses of people who are excited by your work who aren’t friends and family. They’re staying up to date with what you’re doing.”

READ MORE: Equity Crowdfunding is Here – And It Could Be Terrible For Indie Filmmakers

Beware the myth of Icarus: Don’t fly too close to the sun. Lower your goal.

As with the Welles project mentioned above, sometimes the ultimate goal of the project doesn’t seem viable enough for potential backers to support on any scale.

“The goal is almost always a problem for some people,” said Hofstaffer. “You’ve got to lower your goal…I’ve shown the research to filmmakers, examples of failed campaigns that flew too close to the sun and crash and burn because they have some goal that is way too high. They know they could’ve met some more conservative goal and maybe even met that goal they ultimately wanted to reach through stretch goals.”

Unlike the all-or-nothing approach to Kickstarter, Indiegogo and Seed&Spark have more helpful processes to filmmakers who don’t always know how much time or money they’ll need for a project. Seed&Spark is built on staged financing: one can run successive crowdfunding campaigns to get through production, then post-production, then distribution.

“If you can break your project down phase by phase, that is a better thing to do than shoot for the moon and actually not raise anything and not advancing your project,” said Best. “Money and Violence,” a Seed&Spark project

Companies will be much more interested in investing in a small project if they see it has enormous crowdfunding support.

Another reason to balance a budget well: If investors see a budget that will get the project made, they will be willing to support the film well over what it takes to make it in the first place.

Best and Hofstaffer mention that crowdfunding can offer independence to a filmmaker based purely off of their ability to hold onto their project’s IP. “Money and Violence,” a hit web series on YouTube, is one relevant success story.

“[‘Money and Violence’] raised 90k on Seed & Spark for Season 2 and Lionsgate came and snatched them up,” said Best. “And they got to negotiate a way better contract because they owned their IP outright. That is a way to retain independence inside a bigger system.”