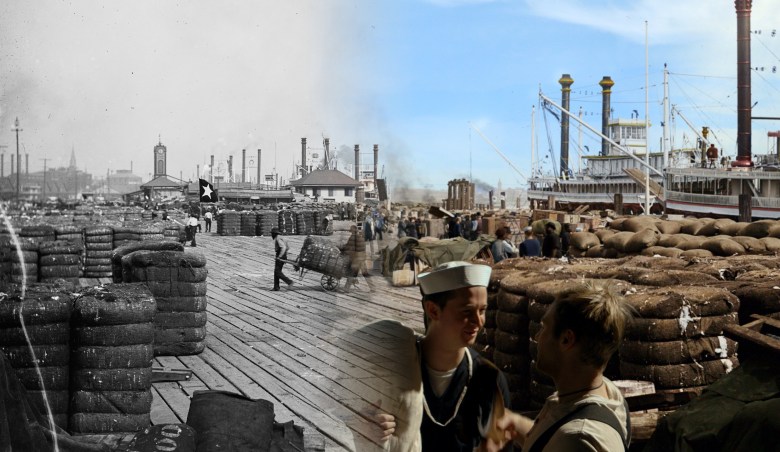 Director Kevin Good ignored some of the basic rules of making when it came time to craft his own ultra low budget feature. For starters, his “Dinner with the Alchemist” is a period film, based on true events surrounding a young prostitute and a string of murders that actually occurred in the French Quarter in the early 1900’s. To tell the story, Good would need to work with supernatural visual effects, a huge cast, a cat, tons of locations and recreate turn of the century New Orleans with a budget of only $40,000.

READ MORE: How To Shoot a Short in One-Hour and Become a Better Filmmaker While Doing It

But as you can see in the video clip below, Good had the ingenuity to make it happen. Despite having over 150 vfx shots, Good and his brother Paul were the entire vfx team. Many of the shots required painting-out modern things, like security cameras, and a few were elaborate virtual sets.

“Early-1900s New Orleans doesn’t exist any more,” Good wrote to IndieWire in an email. “What was once a bustling dock, the trading hub of the region, is now a park. The French Quarter has wonderfully-preserved architecture, but it is constantly overrun with drunken tourists. We simply could not ‘go to the location,’ as it simply didn’t exist. We had to get creative.” Good scoured the Library of Congress photo archive, looking through hundreds of photographs from 1903-1906 taken in New Orleans. He eventually found a handful of images that could work as matte paintings for various scenes.

“We restored, colorized and added movement (birds, horses, pedestrians) to the photos, then added-in our actors, bringing old New Orleans to life,” wrote Good. “This was one of the coolest things about being indie filmmakers making a period piece on a shoestring budget: finding innovative ways to bring a lost time period to life when we didn’t have the means to build full sets. I would love to bring back the photographer of all these wonderful photos so he could see his contribution to our film over 100 years later.”

READ MORE: How They Made the Oscar-Nominated ‘Mad Max: Fury Road’ VFX

Good also had to get inventive in creating large crowds. The director explained how he accomplished “crowd duplication” to film a key church scene: “We simply didn’t have enough extras, much less period clothes to put them in, to handle one of the bigger crowded church scenes in the movie. So we locked the camera down, and using a green screen we moved around the room filming the same group repeatedly. With some compositing and a virtual camera tilt, the shot comes to life as a convincing congregation.”

Watch below to see how these amazing vfx shots were pulled off:

“Dinner with the Alchemist” premiered last week at the Chinese Theater in Hollywood as part of the Dances With Films Festival. Good hopes to announce future screenings in coming weeks.

If you want see more visual tricks from the “Alchemist” and learn more about Good’s approach to low budget filmmaking, here’s a longer video.