Triumph wants you to “choose poop.” 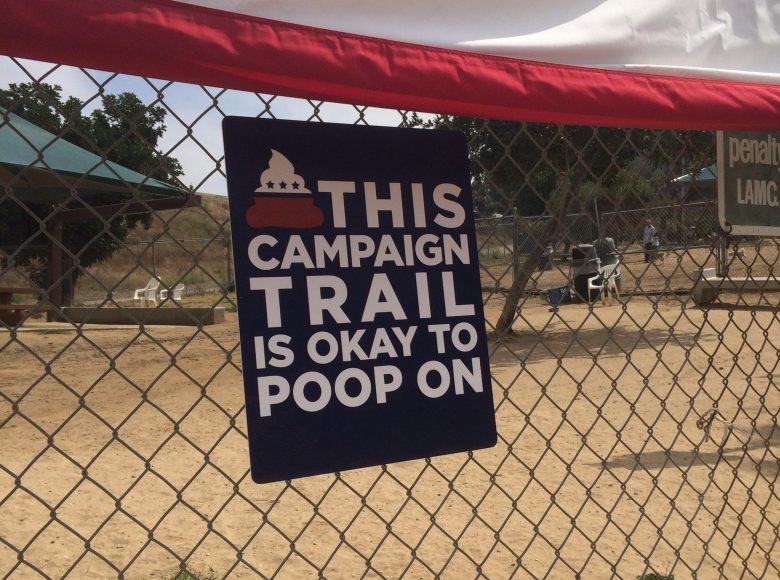 Campaign season is in full swing. Yes, the California primary just happened, but this is a different animal. A literal animal. Yesterday, Hulu posted an Emmy “for your consideration” campaign video for Triumph the Insult Comic Dog — created back in 1997 by Conan O’Brien and Robert Smigel, and only conveniently similar to a certain nominee — in the category of Outstanding Variety Special.

Triumph’s long and hilarious history continued this year as he made the rounds back in February for “Triumph’s Election Special 2016,” a variety special sponsored by Hulu and Funny or Die. But, the Emmys should consider creating a new category for Hulu’s promotion — outstandingly cute campaign video.

This video showcases the Hulu “for your consideration” installation built at the Silver Lake Dog Park this Tuesday, complete with campaign signs and plenty of Triumph’s constituents. Despite Robert Smigel not being present, Triumph’s campaign manager Brad Gage took the duty of spreading the Insult Comic Dog’s message to “choose poop, ” interviewing a few local puppies to see what they think about the underdog while signs warned other dogs that no vote means no treats. And frankly, it’s convincing. Hulu’s most dangerous weapon is paying off. Who can resist puppies?

Check out the many puppies in the video below! Jimmy Kimmel will host the Emmys on ABC on September 18.

Stay on top of the latest breaking TV news! Sign up for our TV email newsletter here.