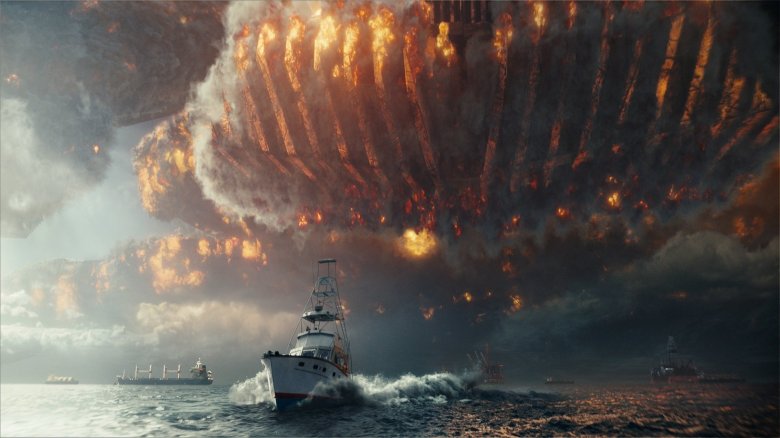 In the summer of 1996, Roland Emmerich’s “Independence Day” reinvented the alien invasion genre for the blockbuster era, using newfangled digital technology to make a B-movie big enough to bring the whole world together. Its reputation may be overinflated by millennials who subsist on a steady diet of their own petrified kitsch, but Emmerich’s war of the worlds has nevertheless come to represent a type of full-bodied studio spectacle for which we all ought to be nostalgic. In fact, the self-described “master of disaster” seems really pissed at the people who aren’t. His lazy insult of a sequel — threatened since the day the first movie first cast its long shadow over America’s multiplexes — is ultimately nothing more than a giant middle finger to a generation of ungrateful moviegoers who didn’t appreciate how good they had it: “If you ingrates thought that was bad,” Emmerich cackles from behind the camera, “you ain’t seen nothing yet.”

Every generation thinks that things were better in their day, but — if alien invasion movies have taught us anything — it’s that some warning signs shouldn’t be ignored. When considered in respect to the original, “Independence Day: Resurgence” is an immaculate case study in how far blockbusters have fallen. Where “Independence Day” had a wide cast of charismatic actors, “Resurgence” plugs in their Costco brand generic counterparts. Where “Independence Day” exhibited the patience of classic studio filmmaking, crescendoing to the alien attack by wracking up the tension for more than an hour, “Resurgence” scrambles for its money shots as though it’s afraid that audiences might click away to something more interesting. Where “Independence Day” was written with the gusto of a game-changer and the scale of an extinction-level event, “Resurgence” unfolds with the cynical grace of a cash-grab and the stakes of a shareholders meeting.

The first movie showed the world something it had never seen before; this sequel shows the world something we hope to never see again. As satellite technician David Levinson (Jeff Goldblum, bless his heart) ominously intones before the aliens drop Singapore onto London: “What goes up must come down.”

Except, that’s not true, because one of the first things we learn in the movie (via the blunt force trauma of embarrassingly transparent exposition) is that gravity no longer applies in a world graced with alien technology. When the slimy invaders retreated back into space after the events of the previous film, they left behind the tools required for humans to rebuild their planet and create a defense base on the moon. But that knowledge has come at a cost: Those who survived close encounters with the extraterrestrials are plagued by the same terrifying nightmare, and all of their children have matured into adults with no discernible personalities whatsoever (that’s an observation, not a plot point).

While President Whitmore (Bill Pullman, delegating 95% of his performance to his beard) obsessively draws a symbol that looks like the power button of a laptop, his grown daughter Patricia (“It Follows” star Maika Monroe, controversially replacing Mae Whitman) stands behind him and looks conventionally attractive. We’re told that fight pilot Steven Hiller (Will Smith) died in a training mission between films (sure, why not), but don’t worry because his step-son, Dylan — a child in the first film, now an adult played by Jessie T. Usher — has replaced him in the cockpit. A quick note about Dylan Hiller: In a movie featuring spaceships the size of the Atlantic Ocean, his truly staggering dullness might be the most unrealistic detail — the character displays less charm over the course of these two hours than Will Smith’s actual son packs into his average tweet. Say what you will about Big Willie’s recent career moves, but his absence leaves this movie with a cratering hole of charisma. Big movies need big personalities to power them, and watching Usher and Hemsworth try to carry a large chunk of this studio tentpole is like watching someone try to fuel a race car with two AA batteries. There’s been a lot of talk about how brands are the new celebrities, but “Resurgence” is gallingly dull proof that the star system was a galaxy worth saving.

We never learn who begat renegade pilot Jake Morrison (Liam Hemsworth), but we can only assume that his parents were an Abercrombie catalogue and an errant piece of plywood that Emmerich found on set.

Anyway, some ominous crap happens, all of which suggests that the two decades between the two “Independence Day” movies was a lot more interesting than what happens in this misbegotten sequel (there’s a strong “District 9” vibe to how human civilization — and one African tribe in particular — has engaged with the aliens who were left stranded on our planet, but the film brushes right over it). And then, 20 years to the day since the first wave arrived (what are the odds!), the invaders return with a vengeance.

When the carnage starts, it feels like the work of a guy who has destroyed the world so many times that he’s completely lost sight of how insane it would be to watch the apocalypse firsthand. Never in the history of cinema has global annihilation felt so weightless and routine — one established character dies in the background of a wide-shot during the first act, but Emmerich cuts away with such a hilariously pronounced degree of indifference that the moment bypasses “cold” and moves straight on to “rude.” Special effects have emptied filmmakers of their empathy, so inured to leveling Earth’s cities that they’ve forgotten what carnage really feels like. Dr. Manhattan may have evolved into a God, but he sure would have been a terrible director.

Only in its craziest, chintziest moments does “Resurgence” recapture the B-movie spark that made the original so much fun. Without spoiling the story’s only unpredictable digressions (this subplot is hatched very early on), it can be said that humans are confronted with a second extraterrestrial force in this film. And it. Is. Hilarious. A mysterious space MacGuffin that feels as though it was beamed directly from an episode of “Mystery Science Theater 3000,” this nameless white sphere exists for no other reason than to map a broader Independence Day Cinematic Universe.

But the corporate transparency of its purpose is completely eclipsed by the goofiness of its role in the plot, and the breathtakingly stupid dialogue it inspires. It’s also worth noting that the fate of the (newly rebuilt White House) results in a sight gag that’s worthy of Pixar. Twenty years and $200 million in the making, and that’s what we’re left with.

That, and a valuable lesson that you can read between the lines: Nostalgia is a powerful thing, but just because you ache for the past doesn’t mean that the present isn’t significantly worse.

“Independence Day: Resurgence” is now playing in theaters across this doomed planet.