The filmmaker — with an assist from Ben Affleck in a bat-suit — wants to reassure audiences that he's bringing levity to the DC franchise. From the London set of "Justice League," he makes his case. 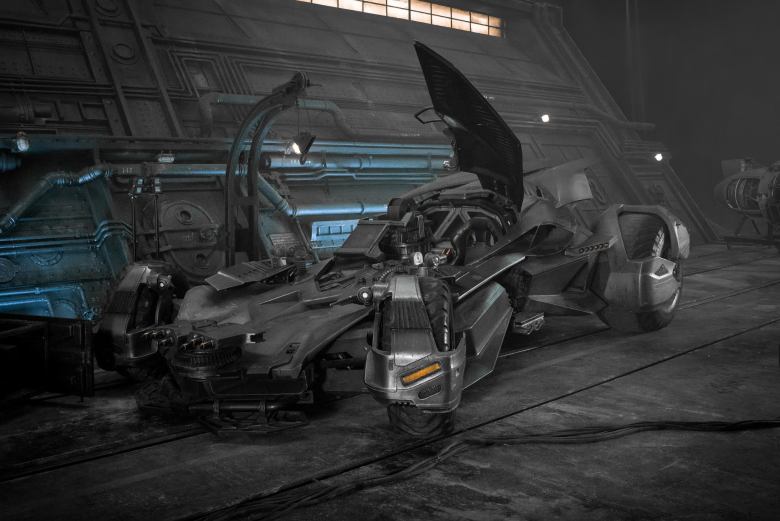 The new Batmobile on the “Justice League” set

Or at least that’s what Barry Allen (Ezra Miller) tells Bruce Wayne (Ben Affleck). It’s his way of explaining why a college student owns a bright-red suit made from the same heat-resistant material as the space shuttle.

The scene was one shown to a small group of journalists last Friday at Leavesden Studios, outside London, where “Justice League” is in the middle of shooting. Director Zack Snyder had just wrapped for the week, and he wanted to show what he’d been working on. So he cued up a clip that had been assembled only the day before, where Bruce, aka the Batman, recruits Barry, not yet aka the Flash, to join what will become the Justice League.

It’s a matter of grave importance, Bruce explains, because a dark threat is gathering, and … “Stop right there,” Barry interrupts. “I’m in.”

The small crowd laughed at Bruce’s puzzled frown as Barry cut off what was obviously a carefully rehearsed Bat-monologue. Snyder laughed, too. It was, after all, why we were there. It was why Warner Bros paid to fly me, and most of the others in the room, to London with less than a week’s notice and put us up in a nice hotel in Mayfair. (I know of one journalist whose publication paid his way, but most of the others, including me, took the studio up on its offer.)

It was why we were granted an afternoon on the set, and interviews with Snyder, the movie’s producers, and its cast, as well as the costume and production designers. And it was why, while such stories are usually timed to a movie’s release, we were only asked to hold ours until Tuesday morning — more than a year before “Justice League’s” scheduled opening in November 2017. Because the story we’re here for isn’t just “Justice League;” it’s about DC’s attempt to launch a Marvel-style cinematic universe, and overcoming the threat to that effort posed by the hostile reaction to Snyder’s “Batman v. Superman: Dawn of Justice.”

“Batman v. Superman” made over $870 million worldwide, which is no one’s idea of a flop. But critics savaged the movie, and, more importantly, its precipitous week-to-week box-office drop indicated that even its core audience didn’t like what they saw. If that movie’s fate were the only thing at stake, Warner Bros. and DC Comics might well have counted their money and gone home. However, “BvS” was meant to serve as the first chapter in the DC Extended Universe, and the product launch didn’t go as planned. With “Suicide Squad” on the way this August, and nearly a dozen more movies projected through 2020, the narrative needs to be changed, and fast.

Amid reports that “Suicide Squad” went back for reshoots to amp up the movie’s humorous aspects, the DCEU wants to get out word that future movies won’t be as monolithically gloomy as “BvS,” or even as downcast as Snyder’s “Man of Steel,” which began with warm Kansas plains and ended with thousands implied dead in the ruins of a wrecked Metropolis. The trailers for “Suicide Squad” are cut to “Bohemian Rhapsody” and Lesley Gore’s “You Don’t Own Me,” which is a far cry from the bombastic whomp of Hans Zimmer’s “BvS” score. Could these be movies we enjoy, rather than endure? Let’s ask.

“Justice League,” Affleck assured us, would be “a totally different movie from the last one.”

“It’s in all the characters inherently,” Snyder explained, “this larger-than-life big fun stuff.” It’s not, Snyder hastened to add, that it’s all fun and games. “They’re still fighting enemies,” he said. “Just look at the Batmobile.” He pointed to a picture of Bruce Wayne’s iconic vehicle, newly armored and equipped with miniature missiles. We stood in a room where the walls were covered with artist’s renditions of scenes from the movie, most showing the characters drenched in shadow or standing amid rubble.

Few details of the movie’s closely guarded plot were directly divulged: When costumer designer Michael Wilkinson asked the unit publicist if he could tell us about the movie’s first scene, the word came back firmly from somewhere beyond the edges of the group: “No.” But here’s what I could glean.

(Spoilers for “Justice League” follow, although it’s possible that some or all of this may not end up in the finished film.)

The movie begins with a “history lesson,” in which we see the ancient civilizations of Earth’s three main tribes: Amazonians, Atlanteans, and humans. Each has charge of a Mother Box, an alien artifact with an immense power that blurs the line between science and magic.

In the present day, Metropolis’ S.T.A.R. labs gets a hold of the Atlantean Mother Box, at which point parademons, winged alien creatures usually associated with the DC villain Darkseid, begin kidnapping scientists, looking for information. (No one involved would confirm that Darkseid appears in the film. The best we got was confirmation of Darkseid running buddy Steppenwolf, who appears in a deleted scene from “BvS.”)

The parademons lead the newly formed Justice League — at this point consisting of Batman, Wonder Woman, the Flash, and Ray Fisher’s Cyborg — back to Stryker’s Island, the conveniently depopulated site of “BvS'” climactic battle. Using a spider-like armored vehicle, the Night Crawler (take that, Marvel), the League does battle with parademons in the unfinished tunnels once meant to connect Metropolis and Gotham, and through a massive ventilation shaft that looks like a brutalist clock tower.

Also, Aquaman and Superman show up at some point, and Willem Dafoe plays an Atalantean named Vulko.

How does Aquaman join the team? What about Lex Luthor, whom Jesse Eisenberg hinted might reappear? And isn’t Superman, well, dead? Those answers will have to wait until later — possibly much later. What we do know is that it’s a movie where Batman refers to the parademons as “flying monkeys,” which certainly sounds like a more lighthearted Dark Knight than the one we saw in “BvS.”

“The darkest is where we’ve been,” promised Deborah Snyder, who is wife and producer, and also produced next year’s “Wonder Woman.”

About that producer credit: In addition to shifting the narrative, DC and Warner Bros. have shaken up their management structure, giving DC Comics Chief Content Officer Geoff Johns and WB’s Jon Berg formal oversight over DC Films. Johns and Berg have been part of the informal DC “brain trust,” which includes both Snyders and producer Charles Roven, for years. The reorganization, which was first reported just over a month ago, institutes a more formal hierarchy. Affleck, who is scheduled to direct his own Batman movie, was also elevated to executive producer on “Justice League.” Depending on point of view, that could means either one more voice at the table or one more cook in the kitchen.

DC’s mantra is that its movies are “filmmaker driven,” a pointed contrast to the Marvel Cinematic Universe, where individuality takes a back seat to house style. (Just ask Edgar Wright.) But for Affleck, who strolled over for an interview in full bat-regalia, it’s a matter of balancing the director’s ability to make their film with the needs of the DCEU as a whole. Ben Affleck and Zack Snyder on the set of “Batman V Superman: Dawn of Justice”

If and when Affleck directs his Batman movie — and he stresses that he won’t go forward without a script he likes, and that’s something he doesn’t yet have — it has to live in, or at least be congruent with, the Gotham that Snyder’s created. All of which means that Affleck wants a say in what happens to his character in Snyder’s movie.

“It’s a creative way of being both a filmmaker-driven company and entity, and making sure the right hand knows what the left hand is doing, and there’s collaboration and supervision,” he explained. Berg, he said, “has a big role,” and Johns “is super smart and super nice.” (Yes, Ben Affleck talks like that.)

For his part, Snyder said there’s been “a slight misconception about how much pressure there was on us” for “Batman v Superman: Dawn of Justice” to “perform a certain way.” That movie’s full title may seem like it was dreamed up by marketing executives with a tenuous grasp on the English language, but Snyder said there was never a “corporate mandate” to get both of DC’s biggest characters in the same film. “We make very personal movies,” he added.

It’s clear that the criticism of “BvS” hit home, but Snyder seems to take it more as a challenge than a rebuke. “I’m obsessed with tone,” he said. “Tone has always been the main thing I go after in a movie. With how [“BvS”] was received, we have really put the screws to what the tone of ‘Justice League’ would be, and just crushed it a little bit further.”

“Justice League,” Snyder said, would have been a more upbeat movie regardless, since team-building is a more boisterous activity than fighting bad guys alone. Miller, who hopped up and down between takes, brings an infectious energy to the proceedings, and reports from several corners suggest that Jason Momoa’s performance as Aquaman will be formidable.

But I keep thinking about the scene we saw them shoot, the one where Batman drops a “Wizard of Oz” reference and the Flash clasps his hands to his chest in exaggerated shock as Cyborg steps out of the darkness. There was levity in the performances and the dialogue, but looming high above the actors, on the set representing the roof of Gotham’s police station, were skull-faced gargoyles dozens of feet high — exactly the kind of overblown Gothic detail for which Snyder’s movies are famous. In “Batman v Superman,” Bruce Wayne is driven to his lowest point. In “Justice League,” Affleck said, it’s about “starting over, being reborn, believing — finding hope.” It could be the same for Snyder, a singular artist forced to join a team in order to win the biggest battle he’s ever fought.

But after so many years perfecting his own aesthetic, can he play as well with others? It falls to Batman to assemble the Justice League, but it takes a while for him to fine-tune the give-and-take of leading a group rather than going it alone. After a while, Affleck said, you have to ask, “Is the guy who broods in a cave all day really the best guy to do this?”

This Article is related to: Features and tagged Batman, Justice League