The Emmy nominee reveals what her two iconic roles have in common — and what they don't. 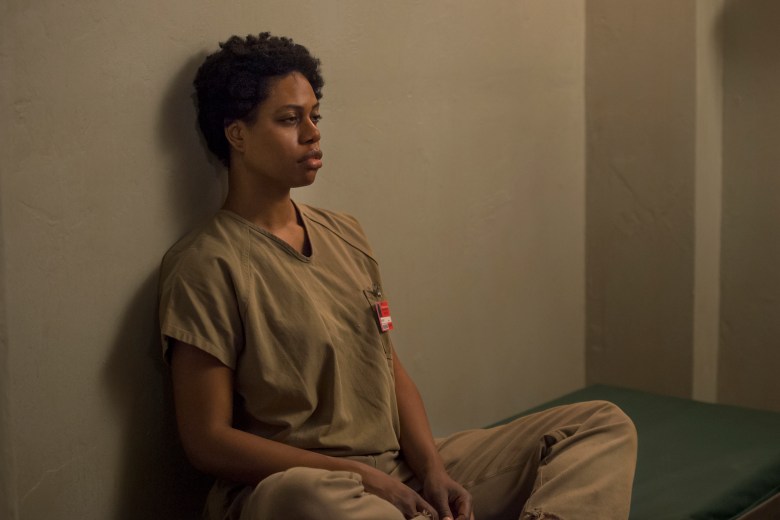 Laverne Cox in “Orange Is The New Black”

Warning – the below contains spoilers for the plot of “The Rocky Horror Picture Show.”

Fans of the “Rocky Horror Picture Show” may be nearly as excited as Laverne Cox that she stars in Fox’s upcoming remake as the iconic Dr. Frank-N-Furter.

Cox told IndieWire that in taking on the role, she was surprisingly affected by Frank-N-Furter’s sad fate: “So this man, you make him, and the first day out he cheats on you with this random chick! It’s catastrophic and devastating and maddening! Then, to be killed by your staff; it’s horribly tragic.”

There are connections to be made between the iconic character of Dr. Frank-N-Furter and Cox’s Emmy-nominated work on “Orange is the New Black.” Playing Sophia on “Orange” helped Cox become one of television’s most notable stars and break down boundaries for trans performers — but while the character has her own innate tragedy, the role originated on the screen by Tim Curry has a very different, sexual energy to it.

“Masculine, feminine, let me just accept all of these things about myself,” Cox said during our interview this January, just before she was set to begin rehearsals for “Rocky.” An edited transcript follows.

It seems like exciting things are happening for you.

It’s a good time. I’m about to start “Rocky Horror Picture Show.” I’m just excited and anxious to get going and get started with it. I’ve been preparing since I found out that I was cast. I’m just ready to do it with everybody.

Very apropo for “Rocky Horror Picture Show” — “doing it” with everybody.

Was this ever something you imagined happening? It’s a really exciting choice for them.

I’m just really excited about the challenge. It’s completely different from anything I’ve done before. There’s so many elements. I’ve just been preparing a lot. I’ve learned a lot about the nuances of the music and the character. The fact that Richard O’Brien was inspired by an homage to old Hollywood and scream queens and this whole diva worship underlies how Frank-N-Furter has constructed her persona, her personality. That seemed to influence Tim Curry’s performance. It’s camp. I think it was Susan Sontag who said, “Camp is the light that tells the truth.” Camp as in invisible wink. Also looking for those truthful moments, where the veneer comes off and we see the truth of who this woman is.

It’s a really sad story, at the end of it.

There’s something very catastrophic about finding the technology to create human life and to create the perfect man. I think a lot of women would love to be able to do that — heterosexual women, that is. So this man, you make him, and the first day out he cheats on you with this random chick! It’s catastrophic and devastating and maddening! Then, to be killed by your staff; it’s horribly tragic.

Riff Raff talks to Frank-N-Furter about her excess, because there is something very extravagant and excessive about her. She freezes everyone and then creates a floor show. At the end of it, I feel like she’s longing for love and attention and acceptance. I think we all want that at the end of the day. We just want love and a space to be fully who you are. I often like to think about this place where she’s from: Transexual, Transylvania. There’s not that much about that place in the script but I often like to imagine that it’s a place where you can create yourself in terms of gender and race, where you can be in this completely free space. I suspect even in Transexual, Transylvania, there’s even some pushback. I think Riff Raff sort of epitomizes that: “You can choose your gender but you can only go so far.” Frank, she doesn’t want it to be that there are limits. She doesn’t want limits. That’s just a wonderful thing to play.

Compared to Sophia, [“Rocky’s”] completely different. So much of how Sophia’s been constructed, there’s a little bit of Laverne sass in her — but I think, for me, Sophia was always one of those people who before she transitioned tried to overcompensate and be masculine. So that sort of predates the way I think about her gender performance.

I think there’s a little performance in gender, this innate authenticity. That’s very different and she’s incarcerated and she doesn’t have any freedom. Frank-N-Furter is this person who is in complete control of everything around her and is probably a person who is abusive. She’s a murderer. She’s fun, but she does some reprehensible things. Sophia does too. Those are the similarities, but the singing and dancing and sexuality is different. I think Frank-N-Furter is sexualized in a way that Sophia never has been. That’s the way she’s been written and her relationship with [wife] Crystal; she’s just not a sexual being. Frank-N-Furter is all sex. That’s wonderful.

What’s always been such a profoundly beautiful and sad part of Sophia’s backstory is the fact that the reason for the credit card fraud [which landed her in prison] was to finance her transition. She lost her freedom for her transition — which is in complete contrast to Frank-N-Furter.

Absolutely. There have been so many moments where Sophia’s discovering her womanhood and able to be herself finally. She can just let go of everything. For me, I had a period — I was never good at being butch, but I had a period where I tried to. When I finally just transitioned and was able to let go of that, just sit the way that I felt like sitting… I’ll sit in some ways that people perceive as being masculine, but I’m in the stage about everything. Masculine, feminine, let me just accept all of these things about myself. Sophia is in this place where she doesn’t have to pretend, which is wonderful. Whether you’re trans or not, if you can get to that place where you don’t have to pretend, it’s a wonderful place to be in.

“Orange is the New Black” Season 4 premieres tomorrow on Netflix.

This Article is related to: Television and tagged Awards Season Roundup, Consider This, Emmys, Laverne Cox, Orange is the New Black, The Rocky Horror Picture Show