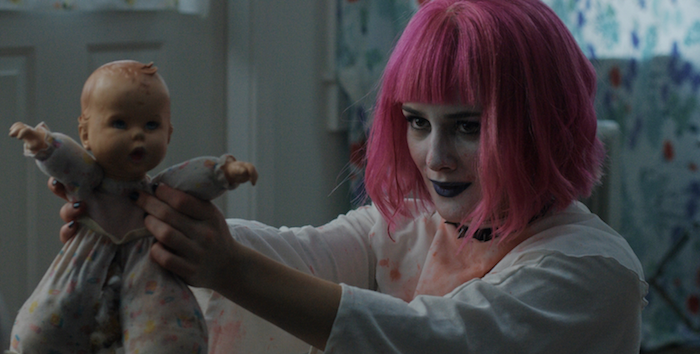 So many low-budget American indies are about stunted twentysomethings who return to their childhood homes in order to achieve some great personal catharsis, but so few of them understand what home really means, or know how to find it. It’s been more than a decade since “Garden State” enshrined that template for a new generation of filmmakers, yet Zach Clark’s weird, winsome, and wonderful “Little Sister” is one of the few movies that has used it to tell a story that feels indivisibly true to itself.

“Fail to see the tragic, turn it into magic!” The Marilyn Manson lyric that flashes on screen before the first shot does a nice job of framing the film’s characters, but it could just as easily be describing how Clark takes a trite premise and mines it for something genuinely special.

You know how pat this usually plays out: A creatively flailing millennial pilgrimages to their parents’ house because someone is dead or dying, only to meet a member of the opposite sex who helps them turn their frown upside down and rediscover whatever mojo they lost along the way. Clark, however, circumvents the most obvious tropes with a studied sense of direction; he knows his way around this material, having previously explored the mordant power of nostalgia in festival hits like “White Reindeer” and “Vacation!”

“Little Sister” is his best film to date, and it shimmers with a quiet sense of ambition from the start, high-concept in a low-key way. Colleen Lunsford (a note-perfect Addison Timlin) isn’t a struggling actor or a recently fired shoe designer, she’s a young nun in New York City, a virgin on the verge of taking her first vows. She’s also a bright-eyed former goth who’s full of social grace, and her supervisor at the convent (horror icon Barbara Crampton) is growing concerned that the girl hasn’t fully divested herself from the outside world.

The film’s title is a double entendre, alluding to Colleen’s role in both her secular and religious families, and “Little Sister” is born from a newly introduced tension between those two opposite worlds. Summoned south by her depressive mother (Ally Sheedy), Colleen hits the road, driving down memory lane until the road ends outside her old stomping grounds in the woods of Asheville, North Carolina. It’s natural to feel like a tourist the first time you revisit your childhood home as an adult, but Colleen might as well be seeing her past reflected to her through a funhouse mirror.

Her mom is recovering from a suicide attempt, her dad (Peter Hedges) is recovering from a failed acting career, and her older brother Jacob (indie stalwart Keith Poulson, unrecognizable under pounds of makeup) is recovering from a stint in the Iraq War, which ended with the landmine blast that torched his lungs and severely disfigured his face. As Jacob’s loving girlfriend (Kristin Slaysman) tells Colleen before breaking down in tears: “I’ve been trying so hard to be happy, but everybody is having such a bad time.”

READ MORE: Get A First Look And Listen At The Goth Family Drama You Didn’t Know You Needed

Set in the infinitely possible days leading up to the 2008 Presidential election and poignantly bridging key moments with excerpts from some of Obama’s most hopeful speeches, “Little Sister” cuts into our recent history until it bleeds like an open wound. Tender, funny, and blanketed in the haze of a half-remembered idyll (Daryl Pittman’s dreamy, autumnal cinematography gives the sense that Colleen’s fog-soaked family home is an anomaly from another time), Clark’s film is so attuned to the pain of reckoning with the past that every detail feels remembered rather than invented.

For all of its horror-metal leanings — iced with an indelible scene in which Colleen destroys a plastic baby doll while lip syncing to Gwar’s “Have You Seen Me?” — the movie skips along with a degree of semi-historical sensitivity that gives it the feeling of a good Sufjan Stevens song. Before long, the burns on Jacob’s face begin to feel less like a grotesque novelty than a visible manifestation of the ugliness that’s been percolating under the surface since Colleen first left town.

The Lunsfords may be convinced that they’ve drifted away from some lost idyll (Colleen is the only one who obsessively pores over old home video footage, though all of her relatives tap into the same reservoir of nostalgia), but by setting this story at a time that’s starting to fade into a lost idyll of our own, Clark conjures a movie that’s firmly focused on the joys of the present moment. Nostalgia is inevitable, but what’s the use in waiting for it?

Of course, such delicate abstractions are only worth trying to put into words because Timlin’s performance makes them so hard to deny. A faintly familiar face whose talent has been underserved in movies that didn’t know what to do with it (e.g. “That Awkward Moment”), Timlin inhabits Colleen with the guarded grace of someone who’s trying to figure out if she can go with God without leaving a big part of herself behind. It’s a subtly demanding characterization — there are only so many young actresses who could sell the reality of a pretty nun with an inverted crucifix in her childhood bedroom  — but Colleen is funny when you least expect it, sharp when you think she might go soft, and ineffably true to the better angels of her nature until the bitter end. The way Timlin yelps “Chickens!?” is worth an Indie Spirit Award in and of itself.

“Little Sister” may be a small film that resolves in a familiar truism — “All you can do is keep trying, and hope that somehow trying is good enough” — but Timlin’s turn is good enough to convince us that trying will be.

“Little Sister” premiered at SXSW and recently played at BAMcinemaFest. It is currently seeking U.S. distribution.