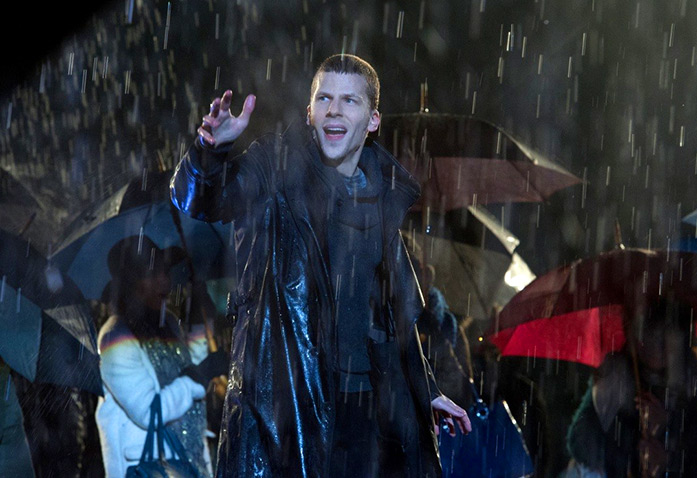 Legendary magician David Copperfield (who, incidentally, is a co-producer on “Now You See Me 2”) used to end his shows by literally flying off the stage — he would put his hands on his hips, puff his chest like Superman and lift up into the rafters. This incredible exit left such an impression because it got to the heart of what magic is all about: A great trick doesn’t work by blindsiding the audience with an act of God. On the contrary, it works by defining the distance between the perceived and the impossible. David Copperfield may have been able to seduce supermodel Claudia Schiffer on his way to amassing a fortune that borders on the billions, but the man can’t fly. And yet, that’s what made his finale so grand. It was a spectacular illusion because audiences knew it wasn’t real — as Michael Caine says in “The Prestige”: “You want to be fooled.”

Magic — in the mortal sense of the word — is inherently difficult to sell on screen. The very nature of cinema is predicated upon illusion, the eye deceiving the brain into thinking that a rapid-fire stream of still images is in fact a moving picture. From that foundation, the tools of the trade render almost nothing impossible, as a filmmaker can do as much by cutting between images as a skilled illusionist can by cutting a deck of cards. In other words, there’s a good reason why there are a lot more movies about actual magic than there are about magicians. In reality, it’s only fun to see a man fly because you don’t believe it’s real; in the movies, it’s only fun if you do.

READ MORE: Jesse Eisenberg: I’d Rather Be In A Good Sequel Than A Bad Original – Q&A

“Now You See Me 2″ begins with some Morgan Freeman narration in which he pledges that “Seeing is believing.” Although filmmaker John M. Chu has replaced Louis Leterrier in the director’s chair, it’s immediately clear that his installment will continue the franchise’s defining characteristics: An open contempt for coherent storytelling, and a gleeful failure to understand the idea of “movie magic.”

Picking up a few years after the original left off, “Now You See Me 2” finds the world’s greatest ragtag team of magicians — “The Four Horsemen” — being forced to live in hiding. Glorified Robin Hoods for the digital era, their ethos of stealing from the rich and giving to the poor has led them afoul of the authorities. Fortunately, their leader, Dylan Rhodes (Mark Ruffalo), has a day job as an F.B.I. agent, so he’s been able to misdirect the feds from the inside. Good thinking! All of your favorite Horsemen have returned, unless your favorite Horsemen was sole Horsewoman Henley Reeves (Isla Fisher), because she’s been swapped out for newcomer Lula May (a plucky Lizzy Caplan) with all the fanfare of a magician dumping his assistant for a younger model; woe to anyone who expects even a half-assed explanation as to where Henley might have disappeared. The rest of the gang is just as you don’t remember them: There’s Danny Atlas (Jesse Eisenberg), a smug street magician whose steely-eyed scowl always make him look like he’s defending himself in divorce court. Then there’s Jack Wilder (Dave Franco, his comic talents are completely wasted), who can throw playing cards like daggers — his strong suits have changed completely since the last film. Woody Harrelson returns as hypnotist Merritt McKinney, and also as Merritt’s evil, curly-haired twin brother, because — prior to this series — more Woody Harrelson always seemed like a good idea. Last, and definitely least, Morgan Freeman is back as the nefarious mean guy who has a convoluted backstory and sometimes does stuff.

When the Horsemen step out of the shadows to publicly reveal how a young cell phone magnate is using his latest device to steal his users’ data, our histrionic heroes are upstaged by a mysterious new player. It isn’t long before they get to meet him face-to-face, as they’re teleported to Macau and brought to his doorstep faster than you can say “Chinese box office” (in the film’s only believable twist, it turns out that “Now You See Me 2” exists for no other reason than to rake in that sweet, sweet yuan). And who is the mystery man responsible for whisking the production halfway around the world? He’s Walter Mabry (Hogwarts alum Daniel Radcliffe, delightful in an ironically non-magical role), a spoiled billionaire who wants the Horsemen to steal something because something. Whatever.

As per the series’s apparent tradition, the plot of this movie has all the coherence and consequence of a presidential caucus, and tracing any individual character’s arc would likely leave you with a broken wrist. Chu’s direction elevates this sequel above the original, but at least that headache remained focus on the Horsemen’s economic agenda. By contrast, “Now You See Me 2” feels like a feature-length film that’s entirely comprised of the laziest and most absurd plot holes you’ve seen in other movies. It’s never a good sign when at least a half-dozen story beats are explained by hypnosis. There’s a difference between suspending disbelief and expelling it with extreme prejudice.

There are three kinds of magic tricks in “Now You See Me 2”: Things they don’t try to explain, things you wish they hadn’t tried to explain and things that could only be possible via the wizardry of wretched screenwriting. All of them, however, rely on the same basic formula: Present something so outlandish that it would have to be magic, and then suggest that (or agonizingly describe how) it was actually just a work of high-tech, god-level deception. In one scene, Danny Atlas manipulates every bead of water in a London rainstorm before explaining that the illusion was the result of some strobe lights and a rain machine. Uh huh. Technology may be the new magic, but this orgy of unmotivated special effects suggests that just because you can put something on screen doesn’t mean that you should. Of course, it might be a fun and refreshing change of pace to watch a Hollywood franchise that untethers itself from all intelligent thought by design, and the film’s best sequence hints at the property’s unrealized potential. Jon Chu has always been drawn to dance, and the standout moments of his uneven blockbuster career have found him continuing to channel the same grace and fluidity with which he redefined the “Step Up” series. Consider the mountain siege in “G.I. Joe: Retaliation,” during which a clan of ninjas repel around a Himalayan temple in a balletic and tightly choreographed routine that marries the cartoonish violence of a Marvel movie with the brute finesse of “Magic Mike XXL.”

READ MORE: Lionsgate Plots ‘Now You See Me 3,’ Says ‘Power Rangers’ Will Be A Series Of Movies

Here, he brings that same balletic quality to a sequence in which the Horsemen are tasked with stealing a computer chip from a heavily guarded, hermetically sealed vault (in which there are conveniently zero security cameras). Jack pastes the chip onto the face of a playing card, and the (CGI-assisted) Horsemen fling it around the room in the hopes of eluding detection. The sequence shouldn’t work — there’s nothing at stake, and the laws of physics seem to have taken the day off — but Chu elevates it into a nimble sort of digital dance as you marvel at the inventiveness with which these characters are playing keep-away.

At no point are you fooled into thinking that any humans are actually capable of doing this stuff, but, for at least one scene, you can appreciate how cool it would be if they were. We used to watch movies and wonder “How did they do that?” The problem with “Now You See Me 2” isn’t that we already know the answer, it’s that we’re not even inspired to ask the question.

This Article is related to: Reviews and tagged Jesse Eisenberg, Jon Chu, Now You See Me