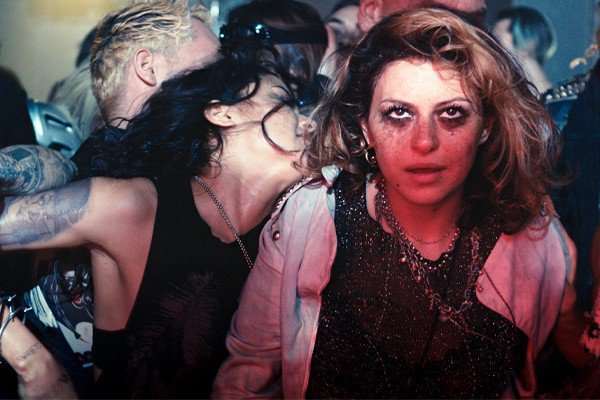 Early on in her new film “Paint It Black,” not even a full reel into her directorial debut, Amber Tamblyn shows a profound understanding of loss. Josie (Alia Shawkat) learns that her boyfriend Michael (Rhys Wakefield) has been found in a motel, dead from a self-inflicted gunshot wound. Devastated, she heads for a local punk club, where her strobe-lit reactions to her surroundings reveal a special brand of sorrow-induced numbness. But after a night of shocked emptiness, we see her renewed, with a brand new hairdo, posing for a nude portraiture class. After striking up a conversation with one of the students her age, they quickly sneak into a nearby home for some illicit swimming and a romantic tryst.

Some viewers might anticipate that this lover is actually Michael and this romantic rebirth has been a stealth flashback. With a snap, we’re back in present day with Josie in a drunken haze, still unable to process what’s been lost. It’s this same post-grief uncertainty that Tamblyn and co-writer Ed Dougherty use to inform the rest of this story.

Beyond Josie’s struggle, “Paint It Black” also offers the perspective of Meredith (Janet McTeer), Michael’s distraught mother. A former ingenue pianist, Meredith never quite sheds her performative skin, adopting the veneer of the grieving parent as an extra layer over the pain and confusion underneath.

As both women begin to process a life without Michael, the tension between them rises. Tamblyn’s strongest narrative choice is one of omission: The film isn’t overwhelmed with an investigation of why Michael chooses to take his own life. He only reappears in sparse flashbacks filtered through Josie’s memories, mostly without dialogue after the scene of him and Josie meeting. The film focuses on its two women’s joint struggle rather than its cause.

As Josie and Meredith both cope in their own unseemly ways (an outrageous funeral encounter here, an unwanted house call there), they also struggle to preserve their respective ideas of the young man they’ve both lost. Josie’s discovery of Michael’s upbringing, floating through his childhood room and hearing Meredith’s contradicting stories, brings on some of Tamblyn’s boldest hallucinatory sequences. When Josie can’t grasp the clearest way forward, she’s overwhelmed by fragmented visions, marked by radical color changes (neon reds give way to isolated blues) and an eerie sound design that seeps through past and present.

Tamblyn’s experience as a first-time director is readily apparent in some of these more experimental moments. Drawing explicit connections between the repeated elements of Josie’s story, superimposing faces and body positions, the stylized approach has a forced quality — especially in contrast to the subtler moments found elsewhere. (Josie’s continued ascension of steep staircases while also trying to climb out of her grief is a nice, constant touch.) Shawkat is the film’s constant anchor, exhibiting Josie’s ongoing turmoil without relying on overblown histrionics. The tears she sheds feel earned. While McTeer towers unchecked in her early moments, she’s far more ferocious in Josie and Meredith’s quieter interactions. The mother’s drunken tirades are glancing blows compared to the scythe that Meredith wields when McTeer’s voice is assured and her insults are delivered with a biting calmness.

Although Janet Fitch’s novel of the same name is set 1980s Los Angeles, the film untethers the material from any specific time period, instead letting the shifting venues of the greater Los Angeles area take precedence over temporal concerns. To the story’s benefit, the memories of Michael exist outside of a digital space; when Meredith and Josie tussle over the ownership of Michael’s drawings, it helps that they’re fighting over a notebook of tangible sketches rather than files on a hard drive.

As Michael’s father, Alfred Molina provides a calming presence in the chaos, despite his minimal screen time. Along with the always-affable Simon Helberg, (whose character offers Josey a brief respite from her spiral despite the fact that his film-within-a-film seems doomed right from the elevator pitch), Tamblyn wisely uses them as minor contrasts rather than drawing too much attention away from the Josie-Meredith turmoil at the center.

READ MORE: ‘A Moving Image’ Director Shola Amoo on Being Selected for the 2016 LA Film Festival

The most impressive element of “Paint it Black” is the respect it shows for both women’s grief, even while condemning certain ways that they choose to compartmentalize. While Josie becomes the more sympathetic figure, the deck is not completely stacked against Mom: she’s the one whose sadness we first get to witness.

Josie and Meredith don’t need each other to heal. That “Paint it Black” allows them to retain their independence and reach their own open-ended codas as individuals is a promising first step for a director who already knows how to speak to her audience.

“Paint It Black” premiered at the 2016 Los Angeles Film Festival. It is currently seeking distribution.