One week after the Orlando nightclub mass shooting, parents of victims of the 2012 Sandy Hook shooting spoke at a screening of the documentary "Newtown." 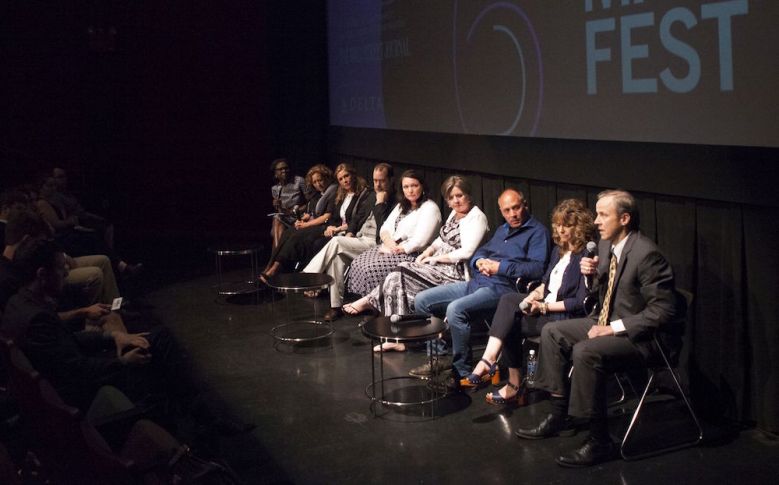 The “Newtown” panel at BAMcinemaFest

Parents of victims of the 2012 Sandy Hook Elementary School shooting bared their grief during an emotional panel discussion at BAMcinemaFest last week, following a screening of the Sundance documentary “Newtown.” The film looks at the lives of those who lost loved ones in the shooting in Connecticut that killed 20 children and six educators, and confronts the inability of policymakers to address the U.S. gun violence epidemic.

During the panel discussion, Mark Barden, whose seven-year-old son Daniel was killed in the Newtown shooting, urged members of the audience to treat the documentary as an instrument in the effort to pass gun control legislation. “We need action, and this is a great tool toward that action,” Barden said, adding that he and the other members of the panel were very appreciative of the everyone who showed up to listen to the emotional conversation. “It means a lot to us that you’d come here and allow yourselves to be exposed to this.”

While “Newtown” is a devastating study of parents adapting to unthinkable tragedy, it ultimately reveals how an entire community’s grief is compounded by the inaction of the U.S. political system, which responds to mass shooting after mass shooting with little more than moments of silence. “It’s about both [grief and guns],” said director Kim A. Synder. “Underlying it is something inherently political.” The screening and panel took place a week after the deadliest mass shooting in U.S. history, where 49 people were killed at a nightclub in Orlando, and two days before Democrats in the House of Representatives staged a 25-hour sit in to demand a vote on gun control laws. Abramorama is screening the documentary for Congress on July 13, and will release the film in theaters on October 7.

David Wheeler, who lost his son Benjamin in the shooting, praised Snyder for the way she respected the needs and wishes of her subjects during filming. “Her approach of sincere empathy and understanding and her willingness to comply with whatever request I made was really, really successful in building a foundation of trust,” Wheeler said. “It allowed us to talk in a way that I knew was going to help me.”

“Newtown” producer Maria Cuomo Cole, who previously executive produced the Oscar-nominated investigative documentary “The Invisible War,” about the epidemic of rape within the U.S. military, said she felt compelled to make “Newtown” so that audiences would be exposed to more than just media coverage of the event. “The trajectory of the aftermath of such horrific gun violence is one that we hadn’t really seen and one that we felt was just absolutely critical for the country not to forget,” she said.

Though Congress failed to act on four pieces of gun legislation the same day as “Newtown” played at BAMcinemaFest, Snyder and other members of the panel were still optimistic that politicians will achieve results in legislating to curb gun violence in America. “There are a lot of ways in,” Snyder said. “We all have hope.”

This Article is related to: News and tagged BAMcinemafest, Newtown, Sundance 2016