The latest from The Lonely Island is funny, but is it funnier than the current cultural climate? 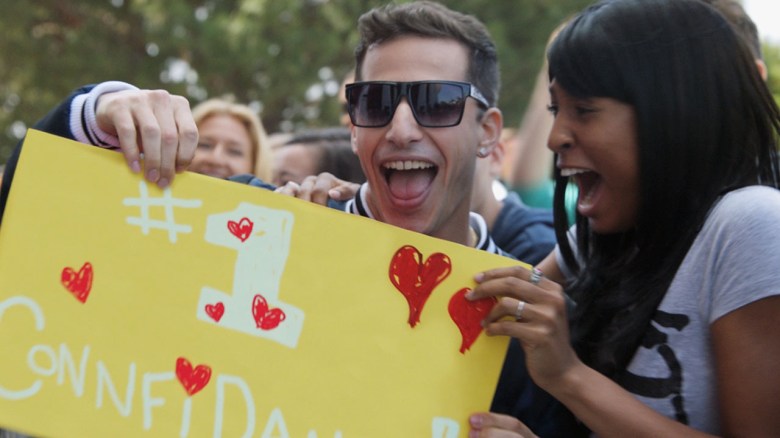 On April 16, 2013, international pop star Justin Bieber visited the Anne Frank Museum in Amsterdam, and left a note in the guestbook dedicated to one of the most famous young victims of the Holocaust: “Truly inspiring to be able to come here. Anne was a great girl. Hopefully she would have been a belieber.” Anne Frank, as you might remember from 2014 teen cancer weepie “The Fault in Our Stars,” wrote a diary that has since served as an invaluable  lifeline for several generations of readers to better understand the inhumanity of war.

In just three short sentences (well, two sentences and a fragment), Bieber found a way to make Frank’s incredible and tragic story — which ended with her dying of typhus in a concentration camp before becoming a posthumous literary icon — all about him. It was one of the most perfect moments in the history of modern celebrity, a sublimely grotesque attempt at humility that crystallized the incredible narcissism of mega-fame.

In the Lonely Island’s Christopher Guest-like mockumentary “Popstar: Never Stop Never Stopping” (the title a play on Bieber’s 2011 tour film, “Never Say Never”), an absurdly self-involved singer named Conner4Real (Andy Samberg) takes a giant shit in the Anne Frank Museum. Not in the bathroom they have downstairs for guests, but in the actual bathroom of the house where Frank and her family hid from Hitler’s army. That toilet probably hasn’t had running water since the fall of the Third Reich. And yet, even though Mr. 4Real ices his desecration of the cultural landmark with an “Ace Ventura” reference, it’s still not quite as funny or surreal as what happened in real life. Watching “Popstar,” there’s no getting around one stubborn truth about this frequently hilarious movie: The incident that may have inspired it was also the incident that rendered it unnecessary. But if “Popstar” is fighting an impossible battle from the start, the boys of The Lonely Island have a lot of fun tilting at windmills, and their film earns just enough laughs by pushing at the boundaries of what’s believable. Everything about the plot is borrowed from Justin Timberlake, all of the details that make it ridiculous are ricocheted back at Justin Bieber and the elements that make it sweet (and even vaguely relatable) can all be traced to The Lonely Island, whose own origin story is baked into the saga of Conner4Real.

Essentially structured like an episode of “Behind the Music,” the film tells the rise and fall (and rise) story of Conner Friel. According to the parade of talking heads who pop up and fill in the backstory from time to time, Conner first broke through as a member of the Style Boyz, a boy band that he formed with his childhood best friends Lawrence (Akiva Schaffer) and Owen (Jorma Taccone). But Conner is to the Style Boyz what Timberlake was to N*Sync — his percolating stardom could only be contained for so long before it needed to be cut loose — and so he ditched his bandmates and decided to go it alone, releasing a phenomenally successful solo record called “Thriller, Also.”

As “Popstar” picks up a couple of years down the road, Conner is on the verge of releasing his much-hyped follow-up album, “Connquest,” which he fails to realize is obviously terrible. His cluelessness is easy to understand once we see that he’s surrounded himself with “yes” people, so afraid of failure that he’s paid several dozen people to help encase him in an impenetrable cocoon of success (Bieber’s hit song “As Long as You Love Me” suddenly assumes new meaning). When “Connquest” finally drops, however, Conner’s world begins to crumble. The album isn’t especially well-received (Pitchfork gives it a score of negative 4), and Conner soon finds that he’s nothing without the true friends that he used to have.

“Popstar,” as you may have guessed, isn’t much of a story-driven movie, and that’s just fine, as most of the story beats fall flat, and only when the movie really moves into the ridiculous does it transcend its premise and become lastingly funny. Take, for example, in a scene where an affectionate fan (played by producer Judd Apatow) generously smothers his penis against the window of Conner’s limousine. It’s poetry.

Even the pop stuff is funnier when the film is departing from reality rather than riffing on it. For instance, Samberg performs a clever (and beautifully produced) song called “I’m So Humble,” in which Conner raps an ode to his own modesty: “The thing about me that’s so impressive / is how infrequently I mention all my successes.” But the laughs the bit generates pale in comparison to those produced by the batshit absurdity of “Finest Girl,” in which Conner waxes lyrical about a hookup whose sexual fetish involved pretending that she was the mastermind of the 9/11 terrorist attacks and asking Conner to “fuck her harder than the U.S. military fucked Bin Laden” (unfortunately, the song is also an earworm of the highest order). It takes a certain strand of twisted genius to build a pop song around a hook like that, but Samberg and company sell it and then some.

Other instances in which the film takes a broader aim at the machinery of pop culture are equally brilliant, including Bill Hader as a cinephile roadie whose favorite hobby is flatlining, and —  in the film’s best recurring gag — Will Arnett as a drink-guzzling caricature of TMZ honcho Harvey Levin. This is the stuff that distracts from how transparently the Lonely Island have made a movie by lacing together twenty different Digital Shorts, each of which may have been a lot more enjoyable served on their own in discrete, 3-minute chunks (“Finest Girl” works well here, but it was even better as a standalone bit during the recent season finale of “Saturday Night Live”).

Because really, that’s all the Lonely Island guys want to do — make fun sketches, that pop up in the middle of an SNL episode and dominate the conversation for the week that follows. These are the same guys who were palling around together during junior high, who could have fractured when Samberg was hired as a feature player on SNL (Schaffer and Taccone also landed off-camera gigs on the show). The same guys who still do almost all of their best stuff together. And this is some of their very best stuff, but one problem remains: Conner4Real is funny, but Justin Bieber (for real) is funnier. Hopefully Anne Frank would have agreed with that.

This Article is related to: Reviews and tagged Andy Samberg, Jorma Taccone