James Wan's sequel to his hit haunted house story is overloaded with jump scares, but it's more intelligent than meets the eye. 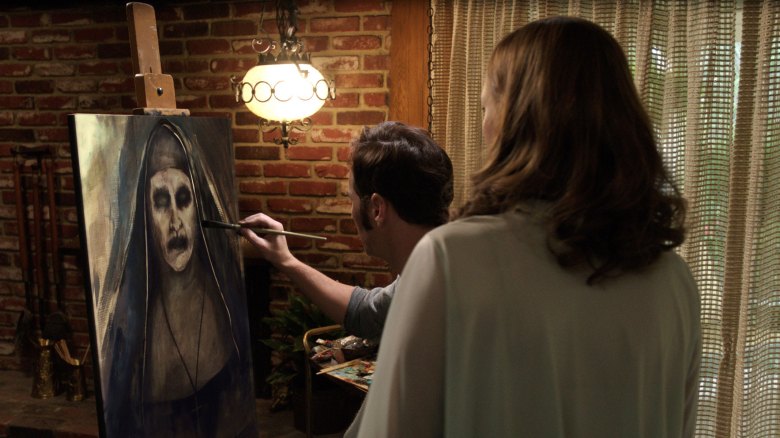 Something scary is almost certainly about to happen. The music builds. Floorboards creak. The camera slowly glides along as a frightened character creeps toward an unseen specter. Nothing happens. And then, one beat later, it does — with a sudden thump, growl or ghastly supernatural occurrence, emphasized by a shrieking orchestra, all of which amount to the cinematic equivalent of someone shouting “Boo!” in your ear. James Wan’s “The Conjuring” indulged this formula for a stylish but fairly straightforward haunted house movie; his sequel, “The Conjuring 2,” treats it like high art.

Clocking in at two hours and 15 minutes, “The Conjuring 2” is in many ways a supersized version of the first film, once again following real-life paranormal investigators Ed and Lorraine Warren (Patrick Wilson and Vera Farmiga) as they attempt to expunge a demonic presence. This time, however, Wan (who co-wrote the screenplay with Chad Hayes, Carey W. Hayes and David Leslie Johnson) shows much greater confidence in the possibilities of applying its fearsome events to some greater end. It’s a smart movie driven by dumb scares.

While the first film touched on themes surrounding spiritual convictions, “The Conjuring 2” mines deeper territory: With the Warrens concerned that their work has endangered their family, much of the story involves their desire to move on with their lives; at the same time, it’s a sympathetic portrait of a low income British family haunted by ghosts and socioeconomic pressures alike.

Opening with a 10-minute prologue as the Warrens endure their scariest seance to date, then dovetailing into period dressing for the U.K. setting with Margaret Thatcher footage and The Clash, “The Conjuring 2” makes its unlikely combination of ingredients evident upfront. It doesn’t always fit together, but there’s a considerable effort this time to give the material a sophisticated foundation. Combining the ingredients of kitchen sink drama with jump scares, Wan’s overstuffed collection of genre elements initially suggests what might happen if Ken Loach, that seminal chronicler of British working-class woes, directed a horror film for renowned B-movie producer Val Lewton (“Cat People”). And for a while, the unique combo works: At its center is the Hodgson family, headed by divorced mother Margaret (Frances O’Connor), who struggles to raise her five children in the grimy home the British counsel is willing to give her. She winds up literally facing a housing crisis from hell when a ghoulish menace begins to assault her children at night, most prominently young Janet (Madison Wolfe), who’s eventually possessed by a dead man claiming that the home belongs to him. Eventually, the “Poltergeist” playbook kicks in, with beds and chairs flying about on their own as the family goes ballistic. Enter the Warrens.

It takes a full hour for the haunted house scenario to settle in, as Wan cuts from bumps in the night to the Warrens’ usual routine: They’re still dealing with media skeptical of their work and a mysterious haunted presence of their own. Just when they’ve agreed to stop taking on new cases and settle into family life, the Church comes calling: They need some experts to prove the Hodgsons aren’t faking it. The couple talk through their commitments in a heavy-handed scene in which there’s no doubting what they’ll decide to do. In short order, “The Conjuring 2” finds its way to the same scenario of its predecessor, with Ed and Lorraine interrogating the family and eventually its unwanted visitor to get to the bottom of its devious intentions.

“The Conjuring 2” casts a wide net and winds up all over the place. Despite the intelligentc craftsmanship, there’s no doubting that this is a big commercial movie riddled with overindulgence. But it’s littered with appealing moments. Coming off the absurd action set pieces of “Furious 7,” Wan goes for the gusto with a grab bag of familiar tricks. A restless Steadicam of “The Shining” variety just won’t quit — the camera drifts through the afflicted household with a ghostly quality that suggests ominous forces peering at the helpless characters from every corner. Other crafty sequences rely on different techniques: Murky events in soft focus hint that Janet has endured some beastly transformation while the adults in the room look away; the edges of a black painting vanish when the lights go out, leaving the unsettling image of a pale-faced nun who may or may not be real. These bits don’t always lead to satisfying results, but they develop an atmospheric dread that holds its own in individual scenes. The movie’s other standout achievement is the chemistry between Farmiga and Wilson, who have grown comfortable with their roles as overzealous detectives of the unknown equally as committed to each other as they are to their work. Their passing glances speak to a deeper clash of values that goes beyond the scare factory on the surface. One scene that finds Wilson crooning an Elvis song to cheer up the frightened children while Farmiga lovingly looks on ranks as some of the best acting either performer has done in years. Take out the horror components and this relationship might look pretty cheesy, but in context, it complicates the material.

None of these bright spots can rescue “The Conjuring 2” from its epic running time and pileup of gimmicks. A host of side characters come and go, as do perfunctory scenes in which the Warrens talk through their clues. Hints of backstories hit dead-ends, and the final reveal of the force driving these phenomena hardly justifying the prolonged build-up. With time, the jump scares have a numbing effect. No matter how much works about “The Conjuring 2,” there’s simply too much of it.

READ MORE: Review: James Wan’s ‘The Conjuring’ Is Filled With Scares, But What’s the Point?

As the thundering finale arrives, the movie runs out of ideas and just regurgitates them a few times over. But it triumphs in a handful of anti-climactic scenes: A tender moment with the Warrens here, an eerie object placed beneath the bed there. As scary as it is when something abrupt takes place, “The Conjuring 2” generates its deepest sense of dread when nothing does, and anything could.

This Article is related to: Reviews and tagged James Wan, The Conjuring, Vera Farmiga