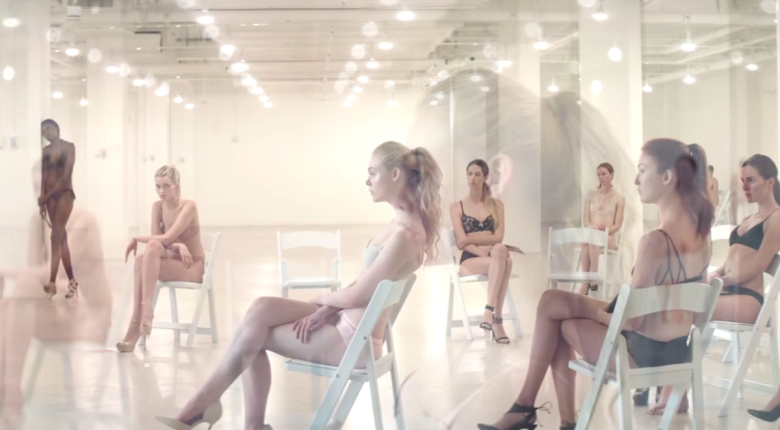 Girl Talk is a weekly look at women in film — past, present and future.

“It’s good to have good girls around,” Ruby coos. Jesse nods in agreement, her body and face still glistening with the gold body paint that sleazy-but-famous photographer Jack (Desmond Harrington) smeared all over her during a particularly racy photo shoot.

It’s a sweet moment. Ruby appears to lean into a maternal role for Jesse, who might need some help navigating her new industry. But soon Jesse balks, firing off a terse comment about not being as helpless as Ruby thinks and stalking away from her apparently concerned friend.

Refn’s latest feature bring him back to the manic Los Angeles of “Drive,” this time training his lens on a pack of women. The film follows Jesse, who doesn’t have much in the way of traditional “talent” but is smart enough to know she can turn her looks into a career. As Jesse ascends to “it” girl, every woman she meets (from Ruby to her new agent, played by Christina Hendricks, to a pair of fellow models played amusingly by Abbey Lee and Bella Heathcote) turns on her, swiftly and completely. The result is a gory good time that’s as much about the female experience as it is the modeling industry. And while Refn doesn’t balk at layering on the terror, the real villain of “The Neon Demon” isn’t a creep lurking in the shadows; it’s the green-eyed monster of female competition.

Christina Hendricks, who co-stars in the film as Jesse’s agent Jan, said the film’s wild nature speaks to a familiar and uniquely female experience.

“Looking at these gorgeous other actresses who are looking at Elle with jealousy, when everyone would be jealous of them, just shows that no one is happy,” Hendricks said. “You always want more. Oh, someone else is blonder or skinnier or younger or got the attention of someone else.”

While “The Neon Demon” fixates on the modeling industry, Hendricks thinks women express the same spirit in many other contexts.

“We always want what someone else has got, whether it’s their handbag or their nose or their thighs,” she said. “We’re constantly dissatisfied with ourselves. There’s an entire industry of people feeding on that.”

Malone, who views Ruby as being driven by acute jealousy, said that the fierce competition is driven by a woman who can’t be fought because she isn’t there.

“What’s scariest being a young woman in this day and age is the comparison to the phantom woman, the woman that is always perfect where you lack. It’s almost as if they don’t exist,” Malone said. “It’s not like a real person that you’re competing against, it’s more of a fantasy.”

Or is it? Bella Heathcote plays the unhinged model Gigi, who happily brags about having so much work done that she’s become “a bionic woman.” The scariest element of Gigi however, is Heathcoate said the character is based on a real person.

“I based Gigi off a girl that I know, who is very much like that, very competitive,” Heathcote said. “The kind of girl who would try to destabilize you in any situation and kind of undermine you to gain the power or feel better or whatever the circumstances.”

Granted, “The Neon Demon” is no one’s idea of cinema verite. But that doesn’t mean the film doesn’t speak to reality.

“Women are so aware of the pressure of the beauty industry and the fashion industry, that when it goes to these ridiculous extremes, we understand it,” Hendricks said.

But Refn’s film targets more than the pressures of the modeling industry; it’s the culture at large. “In this age of everyone sort of obsessing over Instagram and apps that change the way we look, we really do put snake venom on our lips and we really do take fat from certain areas on our bodies and put it in other areas. This sort of science-fiction nature of beauty is already there,” Hendricks said. “As extreme as it gets, and as far-fetched, it does feel around the corner in some ways.”

Malone said the film’s setting is a backdrop for a widespread problem.

All that said, the actresses could cite plenty of personal experiences that fly in the face of “The Neon Demon” worldview.

“I understand that stereotype, that women compete kind of intensely, and it brings out the worst in them and no stakes are too high and every line can be crossed to be the best or the most beautiful,” Malone said. “But it feels a little bit like a fable. I’ve never really encountered that in my own life.”

Malone, who has been in the industry since she was 12, has often worked with women both in front of and behind the camera. She finds that feminine energy often fuels her.

“It’s pretty overwhelmingly supportive, and feels sacred and healing and creative and just kind of awesome to work with women,” she added.

Hendricks said she recently hosted an event that gathered various creative professionals, all women, and the result was very much unlike “The Neon Demon.” That spirit extended to the actual shoot itself, especially for Heathcote, who worked closely with Abbey Lee, a model-turned-actress who plays fellow model Sarah.

“Thank God for Abbey, I loved having her on set. I don’t know if it’s because we’re both Australian or have a similar sense of humor or the same whatever, but I just think she’s excellent,” Heathcote said. “It was just such a relief to be able to have someone not just to commiserate with, but someone to laugh about things with, someone who understands where you’re at. We both had kind of similar challenges that we were facing.”

However, that’s not the world they’re here to promote. By the film’s end, Jesse’s and Ruby’s journeys have not ended well, and Refn’s story pushes the ugliness of human emotion to a physical, bloody, and shocking conclusion. In “The Neon Demon,” competition just isn’t very healthy.

“The Neon Demon” will be released in limited release on Friday, June 24, and will be available on Amazon later this year.