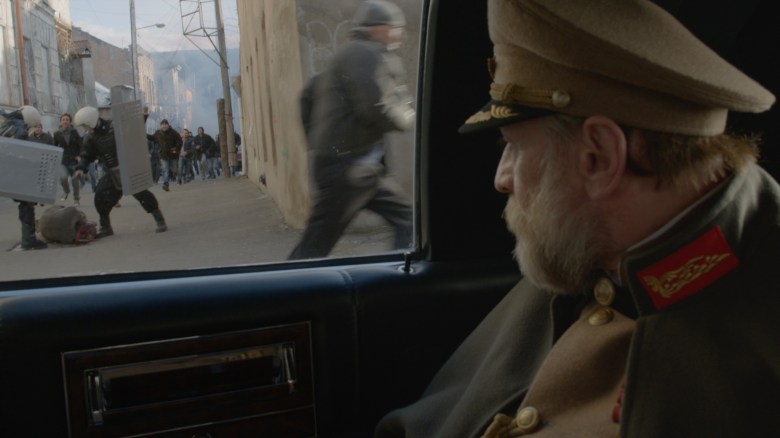 Western entertainment has had a difficult relationship with modern totalitarian regimes. In recent years, in lieu of highlighting the various atrocities that these men in power perpetuate in the name extending their reign, the trend has been toward comedy. Rather than confront acts of evil, perhaps it’s easier to aim for the solar plexus of these individuals’ pride.

The beginning of Mohsen Makhmalbaf’s “The President” teases that kind of mockery, opening with the title ruler showing his young grandson the extreme power he wields over his nation. With a simple phone call, he orders all the lights of the capital to be turned off, crippling a bustling city on a whim. But this momentary glance at a satirical premise quickly gives way to a matter-of-fact, feature-length exploration into the consequences of authoritarian excess. It’s an excoriation writ small, a tale of a fictional character forced to reckon with the unpaid sins that living, breathing despots somehow manage to skirt.

The President of “The President” rules over an unnamed nation (an opening on-screen location cue slyly states “In an unknown country”) where its people speak in a Georgian dialect and the ruling family takes dancing lessons set to “The Blue Danube.” After the toying-with-the-lights opening, the country is thrust into a military takeover, with the leader and his family ousted from the protection of their opulent palace. While the rest of his family takes an emergency flight to safety, the President refuses to retreat so quickly, clinging to the hope that a revolution can be preempted. This plan fails quickly, forcing the two to use various methods to flee to a neighboring country. Dachi Orvelashvili and Mikheil Gomiashvili in Mohsen Makhmalbaf’s “The President”

As his partner on this sojourn to asylum, the deposed leader’s grandson Gachi is his double in nearly every way. Given the way that dictators are often characterized on a global scale (obsessed with possessions, stubborn, given to temper fits, stunted in their sense of reality), tiny Gachi serves as a living embodiment of the ruler’s simplistic excesses. The film’s flashbacks are exclusively told from the newly-minted memories of the grandson; living much the same life of his predecessors, the child is himself a flashback of the infallible story the President projects.

As the pair make their way to the border, they’re stripped of the life in which they recently luxuriated. Wigs and plain clothing replace their matching uniform/visored officer cap sets, giving them just enough disguise for the two to pass without much scrutiny.

Traveling undercover, the President gets a firsthand view of what his regime’s policies have done to the people of his country. Most fellow travelers (be they prisoners, prostitutes or impoverished workers) curse his name or express a profound desire for justice. To survive the legions of enraged citizens eager to bring their erstwhile leader to some sort of punishment, the President ruthlessly pilfers what little resources these unsuspecting people have. In one case, that means taking the clothes directly from the backs of the lone devoted follower they encounter. Dachi Orvelashvili and Mikheil Gomiashvili in Mohsen Makhmalbaf’s “The President”

The transgressions of the President’s regime are left to anecdotes, but the horrors of the military coup that fills the country’s power vacuum are made more explicit. The old man and his grandson walk around the bodies of slain protesters left in the street and a squad of soldiers stand idly by while one of their superiors assaults a woman behind a closed door. While “The President” is quick to condemn the behavior of its protagonist, it puts forth the cycle of violence and poverty left in his wake as its greatest indictment.

Although Makhmalbaf has done some of his best work with intimate, personal dramas whose cast you could count on both hands, “The President” finds the director working in a story with far more scope. Without being tethered to an existing country, Makhmalbaf (along with co-writer Marziyeh Meshkiny) can bring these characters from a thriving capital and a distant airfield through the impoverished rural areas blanketed with snow, up through barren mountainous region. With each new vignette at a different location, amidst a fresh set of potential revenge-seekers, we get the full sense of the nation this leader betrayed.

But the lasting moments of “The President” are the ones delivered with a gentle touch. With the propulsive nature of the pair’s quest for survival, the sequences that find them at rest offer a tiny glimmer of warmth. The simple camera move that frames the two holding hands as they fall asleep is beautiful simplicity, as is the unbroken close-up of one of their travel companion’s devastating homecoming. And while the ending doesn’t quite reach the heights of the final moment of Makhmalbaf’s “A Moment of Innocence,” the inclusion of at least one voice offering a peaceful alternative is the closest connection to the director’s films of decades past. Both of the central performances are lovingly woven into the tapestry of despair on display. Mikheil Gomiashvili delicately balances the President’s human frailty without looking to elicit too much sympathy. His determination to keep himself and his grandson alive is vulnerable and pitiful at each turn, never begging for an unearned heroic or redemptive arc. Dachi Orvelashvili plays the grandson’s spoiled innocence with a childlike eagerness and certitude that deepens the hurt every time part of their plan fails. Together, they help Makhmalbaf mourn their sense of empathy that was dead long before this abbreviated chapter of their life began.

Makhmalbaf’s acts of artistic defiance under an oppressive Iranian regime forced him to work under a particular set of confines, making statements from a certain allegorical remove. Filming within the borders of Georgia, he stops short of taking explicit aim at the real-life President whose incursion into the nation’s sovereign area likely rings truest throughout the region.

Staying in that slightly obscured mode of political criticism allows his message to be applied on a broader scale, pointed towards the tyrants who share any part of this ruler’s DNA. Even though “The President” lacks some of the subtlety that made Makhmalbaf’s previous work transcendent, this film is still a worthy testament to a fiery storyteller determined to use the medium as a necessary means of subversion.

“The President” opens in limited release in New York today and in San Francisco on June 10th.

This Article is related to: News, Reviews and tagged