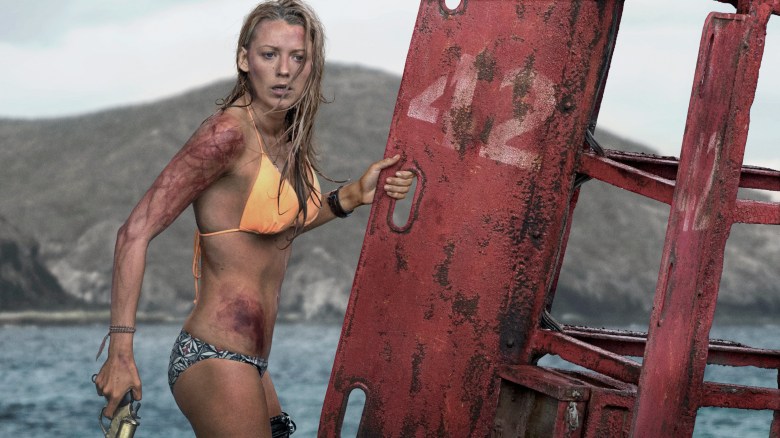 Blake Lively in “The Shallows”

“The Shallows” hits theaters tomorrow, and you may be surprised by how good Jaume-Collet Serra’s survival thriller is. Indiewire‘s David Ehrlich calls it “unequivocally the best shark movie since ‘Jaws,'” adding that “this back-to-basics thriller either eliminates or reclaims all of the excess and gimmickry that have watered down the genre since Steven Spielberg first invented it.”

READ MORE: Review: ‘The Shallows’ Is The Best Shark Movie Since ‘Jaws’

Also enthusiastic is The Guardian‘s Jordan Hoffman: “What could have been mere summertime chum is actually one of the more cleverly constructed B-movies in quite some time,” he writes in his four-star review (out of a possible five). “Without an ounce of body fat on its script, the timing for this refreshing splash couldn’t be better, coming as it does during a deadening summer of flabby sequels. For a slick 87 minutes, ‘The Shallows’ delivers on its promise: Blake Lively, in a bikini, fighting a shark.”

Slant Magazine‘s Carson Lund argues that “what makes the film churn so forcefully for so long, however, is Collet-Serra’s visual acrobatics, which seem almost to flare up in synchronicity with his heroine’s spikes in energy and cunning.” He continues, adding that, “more than that of a babe surmounting a hungry shark, the real story of a conquering here is between the director and his chosen setting. Thank Collet-Serra’s state-of-the-art camera, as it’s both his weapon and his trusty sidekick.”

More mixed is Peter DeBruge of Variety. “At times,” he says, “it’s hard to tell whether ‘The Shallows’ is trying to sell a tropical vacation, that Sony Xperia phone or a fantasy date with Lively herself, but in any case, the film looks virtually indistinguishable from a slick, high-end commercial.”

On the deep end of the negative-review pool is Todd McCarthy, who writes in THR that “Shallow is a mild word for it. Others would be silly, miscalculated, unconvincing, artless, pandering, hokey, ridiculous. Or just plain awful.” The film, which opens tomorrow, currently boasts a 77% on Rotten Tomatoes and a 56 on Metacritic.

This Article is related to: News and tagged Blake Lively, Jaume Collet-Serra, Review Roundup, The Shallows