Julia Louis-Dreyfus and David Mandel capped off an astounding year for "Veep" by bravely facing the unknown, right through to the end. 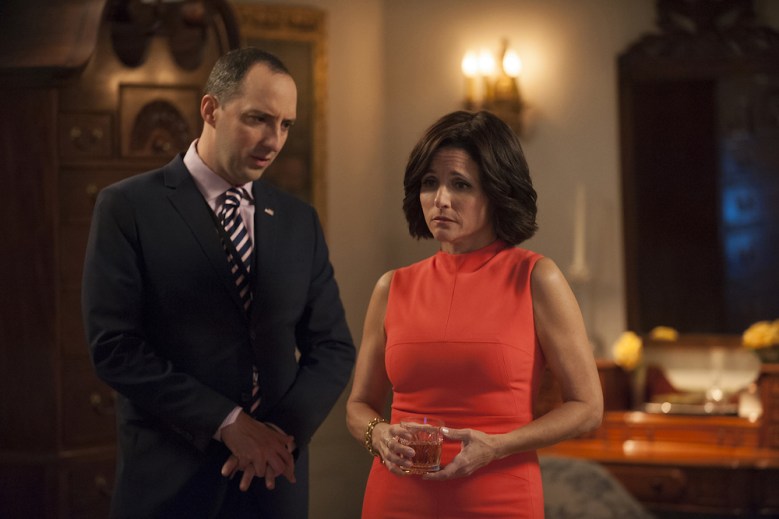 “Maybe it will ruin her parade.” With those words, we saw the first glimpse of happiness cross Selina Meyer’s face all episode. In someone else’s pain and disappointment, she found pleasure. She came close to a similar reaction when Tom James shockingly lost the presidency, but her own misfortune was tied to his, thus ruining any pure happiness the exiting President could cling to in her poorest hour.

The reason I bring this up is primarily to highlight what “Inauguration” focused on throughout: Selina Meyer through the impossibly clear lens of Julia Louis-Dreyfus. Granted, it’s not a stretch to define the series similarly, but the Season 5 finale took another in what have become a series of brave steps by refusing to put Selina back in the VP office. And to justify that choice, showrunner David Mandel relied on moments nuanced and pointed with Selina: her reaction to the rain at episode’s end; her first words to Tom James after his defeat; her barely guarded anger during President Montez’s inauguration speech; her silent gaze into the dreary D.C. skyline, the Washington monument behind her, much like her life holding political power.

Louis-Dreyfus, as always, was magnificent. How she keeps Selina fresh from scene to scene is a testament to her deep understanding of the character (and impossible, immeasurable talent). And with the door left so open for what’s to come in Season 6, that Louis-Dreyfus and the series took us so far inside Selina’s headspace throughout the year speaks to the same: Knowing what makes “Veep” tick and maintaining its high standards of excellence should give viewers more confidence for what’s to come than anything decided in the finale. Selina may be knocked out, but “Veep” is stronger than ever. In a finale fitting for a season both unpredictable and entirely satisfying, “Inauguration” ran through the gamut of possible outcomes with conviction and grace. We saw how the show could have returned to its origins, as Selina threw away her last shred of dignity and accepted Tom’s offer to become Vice President (again). But instead, he was voted out and a new President was ushered in. Mandel and the exceptional “Veep” writing staff rightly chose to forge their own path, rather than redo one already paved.

What’s to come in Season 6? Aside from Jonah’s health scare and Sue’s permanence in the White House, it’s hard to say. And that’s how it should be. Season 5 stands unto itself as a towering achievement in comedy and storytelling. Zigging and zagging from the get go, but without ever losing its driving voice, “Veep” was an absolute joy to behold from start to finish. Mandel knew better than to overreach or over-promise, instead allowing his lead to carry the brunt of Selina’s burden throughout an insightful episode that asks the question, “What next?” Yet no matter what happens in Season 6, this year was perfect. “You look like Clark Kent if they dug up
Christopher Reeves’ corpse to play the part.”
– Roger Furlong

Roger (Dan Bakkedahl) has never been a man of great sensitivity — his beratement of an elderly vote counter in Nevada is near the top of 2016’s many “best of” scenes — but the above line crawls over your skin every time you hear it. “Too soon” doesn’t really cover it, and it’s still not the worst thing Jonah heard this season. His year of triumph couldn’t go unchecked, however, as the man crude enough to hit on his doctor after she handled his (oft-touched) testicles received a grave diagnosis right before the bell.

READ MORE: ‘Veep’ Quiz: Who Delivered the Most Ruthless Jonah Insult of Season 5?

Sometimes it’s not what was said, but who said it. Gary’s emotional outburst after Selina lost her shot at VP truly was “amazing,” as Dan described it when he quickly hung up on a job offer to hear every word Gary had to say. And he had plenty! Going after Kent (“Your numbers are garbage”), Mike (“Your speeches are garbage”) Ben (“Garbage?”), Tom (“You screwed her the worst — in all the ways.”) and the rest of the staff, Gary finally said what he needed to say, and it was oh so glorious. Kudos to Tony Hale for hitting every one of his choice moments this year. His talents cannot be oversold. We do think you’re “funny ha ha,” and that speech absolutely “made the whole year worth it.” 1. Sue – Congratulations, Sue. After a quite season that included a mystery wedding no one knew about, you’re the only member of the Meyer administration still in the White House in 2017. You most certainly deserve it.

2. Jonah –  How…how is this…how did this happen? Jonah is probably the most powerful person on this list, but we just couldn’t bring ourselves to list him at No. 1. It’s too frightening.

4. Richard – Quality time with the (outgoing) president, job security with a Congressman — Richard may be the biggest mover of the year — in an upward trajectory.

5. Catherine – The new look goes well with her newfound success. If only she could find that hard drive, Catherine might be topping the list.

6. Tom James  – While a kick to the Jonads for sure, Tom seemed to be handling his failed presidential bid better than Selina. He’ll be fine making millions from his small town office.

7. Kent – Back to those romance novels, Kent.

8. Amy – Special to a point, Amy’s last brief ride with the President said everything about their relationship: a shared connection that led nowhere.

10. Selina – Out of power and pretend power (as VP), Selina needs a new childhood dream — and fast.

12. Mike  – Jobless and with new kids to care for, Mike was, at least, spared the indignity of being fired. But it’s hard to imagine him getting in front of a press corps ever again.

Stay up to date with breaking TV news and all your favorite shows: Sign up for the Indiewire TV newsletter today!