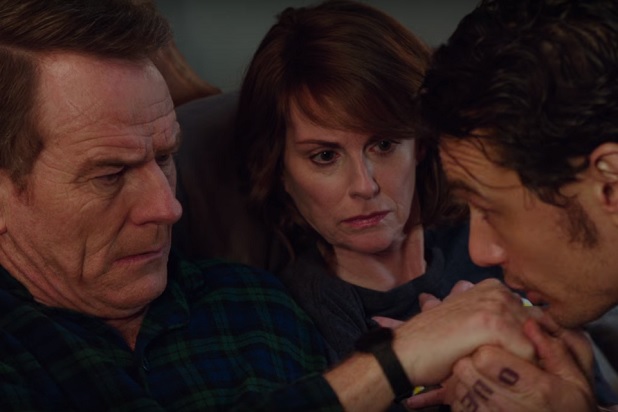 Meeting your daughter’s boyfriend can always be stressful, it can be even more stressful when he’s a tattooed, filterless, foul guy — who also happened to be an “Internet zillionaire.”

In the red-band trailer for “Why Him?,” Bryan Cranston stars as Ned, an overprotective but loving father who meets his daughter’s (Zoey Deutch) boyfriend for the first time and asks himself that very question, why him?

While the family visits Steph at Stanford they finally meet her socially awkward, wildly inappropriate, billionaire boyfriend Laird (James Franco). Ned instantly loathes him and thinks he is no match for his precious daughter. To make matters worse, Laird is ready to propose to his girlfriend and can’t wait to join the family.

The trailer is filled with hilarious scenes of Franco inappropriately cursing at all times, calling Cranston “Dad” and even getting Mrs. Fleming (Megan Mullally) high.

“Laird has literally no filter, but it a really great guy,” says Deutch in the trailer.

READ MORE: Bryan Cranston Would Be ‘All In’ For A ‘Better Call Saul’ Appearance

The comedy is directed by John Hamburg, who also wrote the script with Ian Helfer, from a story by Jonah Hill. Keegan-Michael Key and Adam Devine co-star. Watch the NSFW trailer below, set to Eminem’s song “Berzerk.”

“Why Him?” arrives in theater on December 25.

This Article is related to: News and tagged Bryan Cranston, James Franco, Why Him?