"Range 15" bills itself as the first film to be produced by and star primarily U.S. military veterans. 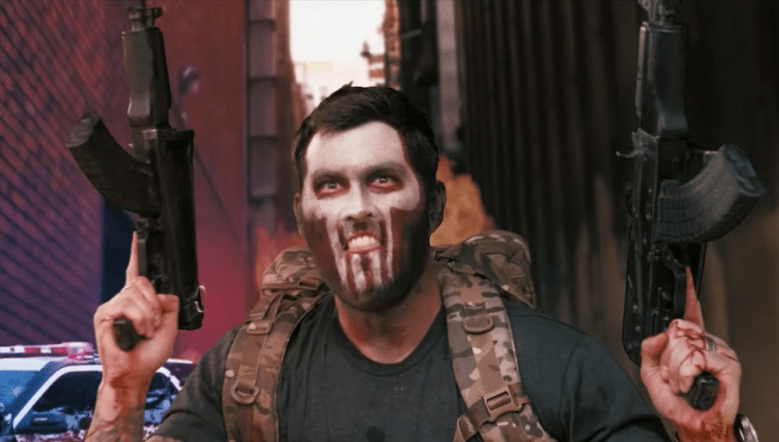 What do U.S. military veterans know about making movies? If the early success of the zombie comedy “Range 15” is any indication — kind of a lot, actually.

Billed as the first film to be produced by and star primarily U.S. military veterans, the movie claimed the Best Film Award at the GI Film Festival last month and has already generated more than $500,000 in its first week at the box office, showing on more than 550 screens through the crowdsourcing company Tugg, which lets individuals choose a film they want to pay to see in theaters. The film first hit theaters on Wednesday, June 15.

“Range” combines more than two dozen U.S. military vets with Hollywood actors William Shatner, Sean Astin, Keith David and Danny Trejo in a story about a zombie apocalypse that threatens to destroy the U.S. The project came to life when former Army Ranger Mat Best and former Air Force Staff Sergeant Jarred Taylor took their idea for a zombie comedy to a screenwriter friend, and eventually to Ross Patterson, director of the 2015 horror comedy “Helen Keller vs. Nightwolves.” Patterson helped polish the screenplay into something that could actually be produced on a modest budget, and served as director on the film.

“In the original script we had written something like ‘Seven cars explode in the sky,’ and Ross would say, ‘We’re not going to have the budget for that, but we can do this,'” Best said. “He developed it perfectly into what the script needed to be, and then we kind of all sprinkled our military humor on top of it.” As a member of the U.S. special forces, Best served in five combat deployments: four in Iraq and one in Afghanistan. Though he is the CEO of military clothing company Article 15, where Taylor works as president, he has also amassed 800,000 Facebook fans from posting comedic videos on his YouTube channel, which together have generated more than 120 million views. The strong social media following came in handy during an Indiegogo campaign to raise $325,000 for the film. Best and his co-producers hit their target in less than 48 hours, eventually collecting more than $1.1 million.

“The veteran and supporting law enforcement communities are super powerful and very engaging,” Best said. “Everyone was kind of overwhelmed with wanting it to happen because no one had ever decided to make an independent film in the military veteran space.” Article 15 contributed additional financing to the film, as did fellow military apparel and lifestyle company Ranger Up. The film’s title comes from a combination of the two businesses.

READ MORE: Timely and Eye-Opening About Veterans: ‘Coming Back with Wes Moore’

Shatner, who has is own veteran’s charity called The All Glory Project, was immediately drawn to the project due to the opportunity to work alongside vets, according to Patterson. Sean Astin joined shortly thereafter. “We couldn’t be more grateful to them,” Patterson said. “It really legitimized the project amongst Hollywood and allowed us to get the rest of the actors.”

Some of the early responses to the film, which was first shown to troops at the Walter Reade Hospital before premiering at the Vista Theater in Los Angeles on June 3, have noted the quality of the acting from a group of non-actors, according to Best. “They’re like, ‘Oh, this is going to be really crappy acting,’ and then they’re just really impressed with the performance from all the guys,” he said.

“Range” is expected to continue attracting audiences via Tugg this summer, after which the film will have a digital release. Best said the gratifying thing about the project is the way it paints a different picture of veterans, who frequently attract attention for things like suffering from post-traumatic stress disorder. “It’s showing them that we’re not broken and that we’re like everybody else,” Best said. “We want to bring entertainment to our community and the people that support us.”

Ross said that the vets working on “Range 15” were so prepared that he wants his next project to be a sequel to the movie. “I enjoyed the process of working with these guys so much that it will be hard to go back to a normal film where actors are unprepared ever again,” he said. “These military guys were on it–every fucking take.”

Check out the trailer for “Range 15” below.